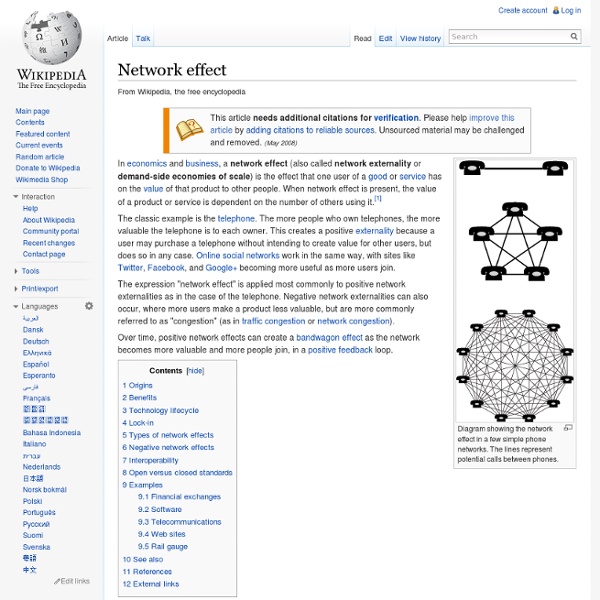 Diagram showing the network effect in a few simple phone networks. The lines represent potential calls between phones. The classic example is the telephone. The more people who own telephones, the more valuable the telephone is to each owner. The expression "network effect" is applied most commonly to positive network externalities as in the case of the telephone. Over time, positive network effects can create a bandwagon effect as the network becomes more valuable and more people join, in a positive feedback loop. Origins[edit] Network effects were a central theme in the arguments of Theodore Vail, the first post patent president of Bell Telephone, in gaining a monopoly on US telephone services. The economic theory of the network effect was advanced significantly between 1985 and 1995 by researchers Michael L. Benefits[edit] Network effects become significant after a certain subscription percentage has been achieved, called critical mass. Technology lifecycle[edit] Lock-in[edit]

Small-world network Small-world network exampleHubs are bigger than other nodes Average vertex degree = 1,917 Average shortest path length = 1.803. Clusterization coefficient = 0.522 Random graph Average vertex degree = 1,417 Average shortest path length = 2.109. In the context of a social network, this results in the small world phenomenon of strangers being linked by a mutual acquaintance. Properties of small-world networks[edit] This property is often analyzed by considering the fraction of nodes in the network that have a particular number of connections going into them (the degree distribution of the network). ) is defined as R. Examples of small-world networks[edit] Small-world properties are found in many real-world phenomena, including road maps, food chains, electric power grids, metabolite processing networks, networks of brain neurons, voter networks, telephone call graphs, and social influence networks. Examples of non-small-world networks[edit] Network robustness[edit] See also[edit] References[edit]

IT Conversations: Noshir Contractor Recent technological advances in hardware and software, broadband connectivity, and the decreasing cost of computers, cell phones, and other such devices have created an environment where we can connect with anyone, anytime, anywhere almost effortlessly. However, how do we determine with whom we want to connect? The answers to this question can be found by studying the underlying socio-technological motivations for the creation, maintenance, destruction, and reconstitution of knowledge and social networks. Dr. Dr. IT Conversations' publication of this program is underwritten by your donations and: Dr. He is the author of over 250 research papers in communication. Dr. Resources: This presentation is one of a series from the MeshForum 2005 Event held in Chicago, Il, May 1-4, 2005. For Team ITC: Description editor: Chase SouthardPost-production audio engineer: Stuart HunterSeries Editor: Cori Schlegel

Scale-free network A scale-free network is a network whose degree distribution follows a power law, at least asymptotically. That is, the fraction P(k) of nodes in the network having k connections to other nodes goes for large values of k as where is a parameter whose value is typically in the range 2 < < 3, although occasionally it may lie outside these bounds.[1][2] History[edit] In studies of the networks of citations between scientific papers, Derek de Solla Price showed in 1965 that the number of links to papers—i.e., the number of citations they receive—had a heavy-tailed distribution following a Pareto distribution or power law, and thus that the citation network is scale-free. Barabási and Albert proposed a generative mechanism to explain the appearance of power-law distributions, which they called "preferential attachment" and which is essentially the same as that proposed by Price. (that is, the number of edges incident to ) by . Characteristics[edit] Random network (a) and scale-free network (b).

&amp;G/localization: When Global Information a danah boyd O'Reilly Emerging Technology Conference March 6, 2006"G/localization: When Global Information and Local Interaction Collide" [This is a rough crib of the actual talk.] Citation: boyd, danah. 2006. "G/localization: When Global Information and Local Interaction Collide." O'Reilly Emerging Technology Conference, San Diego, CA. Good afternoon. My talk today is about "glocalization," one of the most grotesque words that academics have managed to coin. Glocalization is the ugliness that ensues when the global and local are shoved uncomfortably into the same concept. I want to talk about what it means to connect the global and local together in technology and how this affects the design process. The digital era has allowed us to cross space and time, engage with people in a far-off time zone as though they were just next door, do business with people around the world, and develop information systems that potentially network us all closer and closer every day.

Geoffrey Moore - Dealing With Darwin Random graph Random graph models[edit] A random graph is obtained by starting with a set of n isolated vertices and adding successive edges between them at random. The aim of the study in this field is to determine at what stage a particular property of the graph is likely to arise.[2] Different random graph models produce different probability distributions on graphs. Most commonly studied is the one proposed by Edgar Gilbert, denoted G(n,p), in which every possible edge occurs independently with probability 0 < p < 1. .[3] A closely related model, the Erdős–Rényi model denoted G(n,M), assigns equal probability to all graphs with exactly M edges. with 0 ≤ M ≤ N, G(n,p) has elements and every element occurs with probability .[2] The latter model can be viewed as a snapshot at a particular time (M) of the random graph process , which is a stochastic process that starts with n vertices and no edges, and at each step adds one new edge chosen uniformly from the set of missing edges. that a given edge .

The Social Networking Faceoff Written by Alex Iskold and edited by Richard MacManus. With all this buzz around the potential Yahoo! acqusition of Facebook for $1Billion, we think it's time to do the social networking faceoff. Arguably of all services in the new social era, the social network sites hold most promise. Another natural trend that we are seeing in the space is demographic segmentation. In addition to those three, Bebo is making some major waves and has surpassed MySpace in UK and New Zealand. The Social Network Faceoff Chart (*) The active user estimate is based on the assumption that MySpace has 70M users. Traffic Dynamics We can gain additional insights by looking at the traffic dynamics over the past year. Orkut is rising? From the charts we clearly see that Orkut is gaining, but why? But perhaps it is not just that Brazilian users dominate, but also the attitude and confidence of Orkut. Conclusion MySpace is an undisputed leader on all counts, but Orkut is on the rise and it's moving very rapidly.

Zaadz: Connect. Grow. Inspire. Empower. Clustering coefficient In graph theory, a clustering coefficient is a measure of the degree to which nodes in a graph tend to cluster together. Evidence suggests that in most real-world networks, and in particular social networks, nodes tend to create tightly knit groups characterised by a relatively high density of ties; this likelihood tends to be greater than the average probability of a tie randomly established between two nodes (Holland and Leinhardt, 1971;[1] Watts and Strogatz, 1998[2]). Two versions of this measure exist: the global and the local. The global version was designed to give an overall indication of the clustering in the network, whereas the local gives an indication of the embeddedness of single nodes. Global clustering coefficient[edit] The global clustering coefficient is based on triplets of nodes. Watts and Strogatz defined the clustering coefficient as follows, "Suppose that a vertex has neighbours; then at most edges can exist between them (this occurs when every neighbour of ). over all