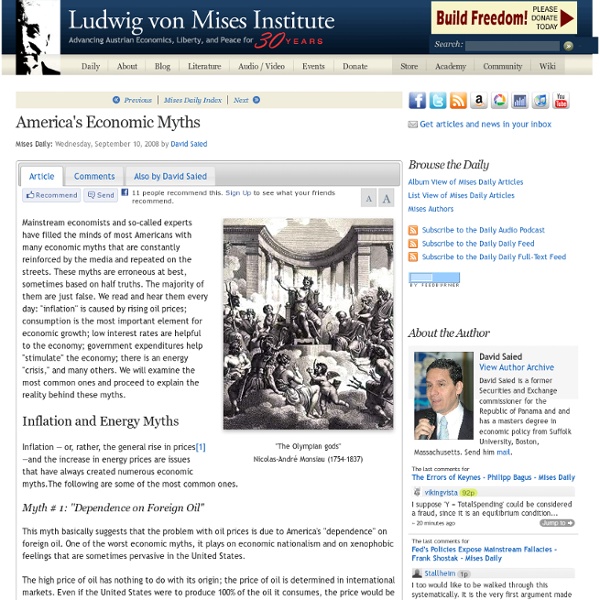 "The Olympian gods" Nicolas-André Monsiau (1754–1837) Mainstream economists and so-called experts have filled the minds of most Americans with many economic myths that are constantly reinforced by the media and repeated on the streets. Inflation and Energy Myths Inflation — or, rather, the general rise in prices[1] —and the increase in energy prices are issues that have always created numerous economic myths.The following are some of the most common ones. Myth # 1: "Dependence on Foreign Oil" This myth basically suggests that the problem with oil prices is due to America's "dependence" on foreign oil. The high price of oil has nothing to do with its origin; the price of oil is determined in international markets. Importing a product does not mean you "depend" on it. Most, if not all, of the higher price of oil can be explained by the expansion of the money supply or the debasement of the dollar. Myth # 2: "Inflation is caused by rising oil prices." False. At first this myth might seem true.

The global debt clock Top Marginal Tax Rates 1916-2010 Green line is the top marginal rate for married couples filing jointly (most years dividends were tax like ordinary income until 2003), orange is the top rate for income from capital gains. The top corporate tax rate is included for comparison. Your marginal tax rate is the rate you pay on the "last dollar" you earn; but when you view the taxes you paid as a percentage of your income, your effective tax rate is less than your marginal rate, especially after you take into account the deductions and exemptions, i.e. income that is not subject to any tax. Over the years, changing the amount of taxes people pay was accomplished not just by changing rates but by changing the income limits of the tax brackets. Just looking at the top rates does not give the whole picture about who is paying taxes. Before the 1986 tax reform, the income tax had 15 brackets. Tax Data: Married filing jointly, Capital Gains & Regular,Corporate

The best way to Drive Targeted Traffic to Your Home Based Business | Liza-Shaw.com Share Email Earn Facebook Twitter Google+ Lockerz Grab Delicious Digg Google Bookmarks MySpace StumbleUpon Reddit By Lockerz TOP TEN TE’s Oops, That wasn't found Sorry, no posts matched your criteria. Perhaps you can find what you're looking for below. Recent Blog Posts There Are Many Different Sorts Of Website Traffic There’s No Such Thing As A Simple Internet Business If You Are Looking To Make Money Online The Autopilot Internet Income Program Can Certainly Help Building Website Links Can Be Done Very Easily And For Free The Affiliate X Program Is What We Will Be Checking Out Below Web Developers Have To Be Concerned About Site Usability You Are Going To Need To Have The Proper Tools If You Would Like To Be Successful Online Paying For Website Traffic Could Be The Best Thing You Are Able To Do Getting Your Website Ranked With Proper Search Engine Optimization With PDF995 Your Info Products Change Into PDFs Traffic Exchanges May Be Profitable If You Understand How To Use Them November 2012 (14) Programs

The Case Against the Fed Money and Politics By far the most secret and least accountable operation of the federal government is not, as one might expect, the CIA, DIA, or some other super-secret intelligence agency. The CIA and other intelligence operations are under control of the Congress. They are accountable: a Congressional committee supervises these operations, controls their budgets, and is informed of their covert activities. It is little known, however, that there is a federal agency that tops the others in secrecy by a country mile. Thus, when the first Democratic president in over a decade was inaugurated in 1993, the maverick and venerable Democratic Chairman of the House Banking Committee, Texan Henry B. It was to be expected that Fed Chairman Alan Greenspan would strongly resist any such proposals. On the face of it, this presidential reaction, though traditional among chief executives, is rather puzzling. Let us consider any other private industry. So there we have it. 1. Why gold and silver?

CLBS Report, System Open Market Account, January 2011 Domestic SOMA Portfolio Recent Developments The SOMA portfolio increased between November 24 and December 29, 2010. Background Open market operations (OMOs)--the purchase and sale of securities in the open market by a central bank--are a key tool used by the Federal Reserve in the implementation of monetary policy. OMOs can be divided into two types: permanent and temporary. Table 2. Each OMO affects the Federal Reserve's balance sheet; the size and nature of the effect depend on the specifics of the operation. In addition, the Federal Reserve has long operated an overnight securities lending facility as a vehicle to address market pressures for specific Treasury securities. The FRBNY's traditional counterparties for OMOs are the primary dealers with which the FRBNY trades U.S. government and select other securities. The Federal Reserve also determined that supporting the MBS "dollar roll" market promoted the goals of the MBS purchase program. Reverse Repos Table 3. Return to top

How I Make Thousands of Dollars Per Month Online 183 Comments 7 minutes Unless you’ve read Cloud Living, you probably have no idea how I make money online. My about page makes it clear that I do make a great living from the internet, but I’ve never wrote about how. Until today. I’m not going to claim my process is anything new, because there were people using similar methods for a long time before me. My first major website made money through contextual advertising (Google Adsense) and selling ads on a CPM (cost per 1,000 impressions) basis. I’ve started websites from scratch, quickly built them to 50,000 visitors per month, and then sold them on for an easy profit. There are many more ways to make money online, but the process that generates most of my income is simply this: I direct search engine traffic to landing pages, and then send that traffic to product pages as an affiliate. If someone buys a product on the site I sent them to, then I make a commission. I’ve just given you a quick overview, so let’s get into the specifics.

Policy pointers SOMA and Liquidity Swaps, Jan 2010 System Open Market Account (SOMA) Recent Developments The SOMA portfolio has continued to expand, although the pace of Federal Reserve purchases of securities under the large-scale asset purchase programs (LSAPs) has slowed compared to its pace last year. Background Open market operations (OMOs)--the purchase and sale of securities in the open market by a central bank--are a key tool used by the Federal Reserve in the implementation of monetary policy. OMOs can be divided into two types: permanent and temporary. Table 2. Each OMO affects the Federal Reserve's balance sheet; the size and nature of the effect depend on the specifics of the operation. The Federal Reserve's approach to the implementation of monetary policy has evolved considerably since 2007, and particularly since late 2008. The Federal Reserve determined that supporting the MBS "dollar roll" market promotes the goals of the MBS purchase program. Liquidity Swaps Table 3. Dollar Liquidity Swaps Return to top

DIY Website Promotion | How to Create and Submit Websites to Search Engines like Google | Free Site Submission | Website Ranking | Do It Yourself Annual Capital Expenditures Historical Data ACES 2010 General highlights In 2010, U.S. nonfarm businesses invested $1,105.7 billion in new and used structures and equipment, not statistically different from the revised 2009 total of $1,090.7 billion.1,2 (See Summary Table A below, Tables1a and 1b.) Total spending on new structures and new equipment was $1,033.7 billion. Expenditures in 2010 for new and used structures totaled $428.7 billion, a decrease of $20.8 billion (4.6 percent) from 2009. Spending on new and used equipment totaled $677.0 billion in 2010, up $35.8 billion (5.6 percent) from 2009. The Annual Capital Expenditures Survey collects data from companies with and without employees. Companies without employees accounted for $69.5 billion of capital spending in 2010, with $33.2 billion spent on structures and $36.4 billion spent on equipment. Highlights by business sector for companies with employees (See Tables 2, 3, and 4) (Data in this section are based on the 2007 North American Industry Classification System. Manufacturing

Europa World Online : Welcome This Central Authentication Service (CAS) provides single sign-on access to Pepperdine University web services. Your log in to this CAS page allows you to access any of your web services for the next two hours, without having to log in again. By logging in via CAS, you agree to abide by the University's Computer and Network Responsible Use Policy. Security warning for shared use computers: The only reliable way to sign out of CAS or other web applications is to exit your web browser. Pepperdine University provides a password management web site at that allows you to change or reset the password associated with your NetworkID.