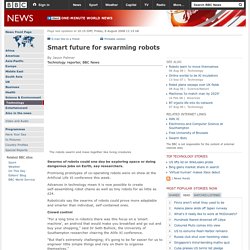 Promising prototypes of co-operating robots were on show at the Artificial Life XI conference this week. Advances in technology mean it is now possible to create self-assembling robot chains as well as tiny robots for as little as £24. Roboticists say the swarms of robots could prove more adaptable and smarter than individual, self-contained ones.

Crowd control "For a long time in robotics there was this focus on a 'smart machine', an android that would make you breakfast and go out and buy your shopping," said Dr Seth Bullock, the University of Southampton researcher chairing the Alife XI conference. "But that's extremely challenging; it's going to be far easier for us to engineer little simple things and rely on them to organise themselves. " Red and green lights on the robot were used to show which task they had chosen. Chain gang. Manuel De Landa - Out of Control. Systems are getting so complicated that they're out of control in a rational sense. 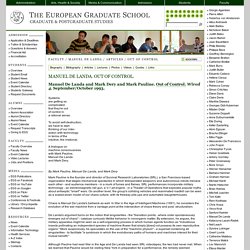 To avoid self-destruction, we have to start thinking of our inter- action with technology in terms of the intuitive, the irrational. A trialogue on machine consciousness with Mark Pauline, Manuel De Landa and Mark Dery. Manuel DeLanda Annotated Bibliography. This page comprises an annotated bibliography of the work of philosopher Manuel DeLanda (1952-). 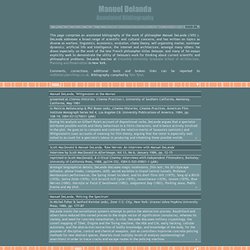 DeLanda addresses a broad range of scientific and cultural concerns, and has written on topics as diverse as warfare, linguistics, economics, evolution, chaos theory, self-organizing matter, nonlinear dynamics, artificial life and intelligence, the internet and architecture, amongst many others. He draws especially on the work of the late French philosopher Gilles Deleuze, and many of his essays explicitly seek to demonstrate the utility of Deleuze's work for thinking about current scientific and philosophical problems. Zero News Datapool, MANUEL DE LANDA,THE EMERGENCE OF SYNTHETIC REASON. At the end of World War II, Stanislav Ulam and other scientists previously involved in weapons research at Los Alamos, discovered the huge potential of computers to create artificial worlds, where simulated experiments could be conducted and where new hypotheses could be framed and tested. 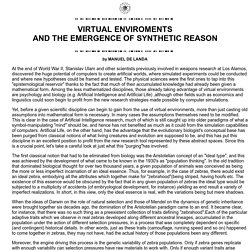 The physical sciences were the first ones to tap into this "epistemological reservoir" thanks to the fact that much of their accumulated knowledge had already been given a mathematical form. Among the less mathematized disciplines, those already taking advantage of virtual environments are psychology and biology (e.g. Artificial Intelligence and Artificial Life) ,although other fields such as economics and linguistics could soon begin to profit from the new research strategies made possible by computer simulations.

Yet, before a given scientific discipline can begin to gain from the use of virtual environments, more than just casting old assumptions into mathematical form is necessary. Untitled. Paul D. 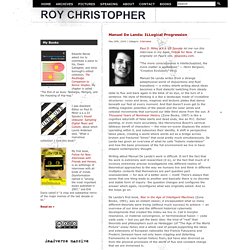 Miller a.k.a. DJ Spooky let me run this interview in my book, Follow for Now. It was originally on Paul’s site, djspooky.com. “The more consciousness is intellectualized, the more matter is spatialized.” — Henri Bergson, “Creative Evolution,” 1911 Manuel De Landa writes from a strange pataphysical world of disjunctions and fluid transitions — a milieu where writing about ideas becomes a fluid dialectic switching from steady state to flux and back again in the blink of an eye, or the turn of a sentence. Writing about Manuel De Landa’s work is difficult. De Landa’s first book, War in the Age of Intelligent Machines (Zone Books, 1991), was an instant classic; it encapsulated what so many different theorists were trying (without much success) to achieve — an overview of our time and the different historical cybernetic developments that created the milieu we live in.

All are obliterated, all brought down By the tireless trickle of the endless sand. Paul D. CTheory.net. Markets and Antimarkets in the World Economy. By Manuel De Landa One of the most significant epistemological events in recent years is the growing importance of historical questions in the ongoing reconceptualization of the hard sciences. 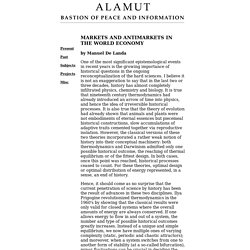 I believe it is not an exaggeration to say that in the last two or three decades, history has almost completely infiltrated physics, chemistry and biology. It is true that nineteenth century thermodynamics had already introduced an arrow of time into physics, and hence the idea of irreversible historical processes. It is also true that the theory of evolution had already shown that animals and plants were not embodiments of eternal essences but piecemeal historical constructions, slow accumulations of adaptive traits cemented together via reproductive isolation.

Hence, it should come as no surprise that the current penetration of science by history has been the result of advances in these two disciplines. And what is true of physical systems is all the more so for biological ones. MANUEL DELANDA: Opportunities and Risks. Another in the ongoing series of articles on materiality by philosopher Manuel DeLanda. 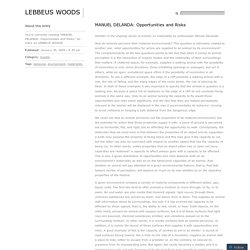 How do animals perceive their material environments? This question is intimately related to another one: what opportunities for action are supplied to an animal by its environment?