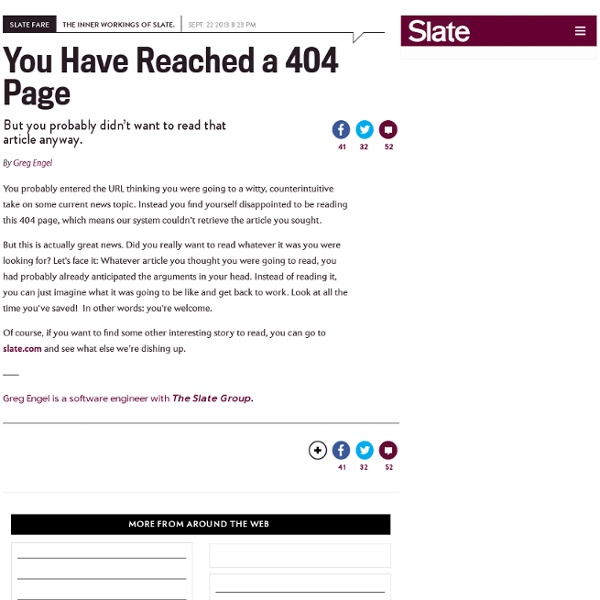 You probably entered the URL thinking you were going to a witty, counterintuitive take on some current news topic. Instead you find yourself disappointed to be reading this 404 page, which means our system couldn’t retrieve the article you sought. But this is actually great news. Did you really want to read whatever it was you were looking for? Let's face it: Whatever article you thought you were going to read, you had probably already anticipated the arguments in your head. Instead of reading it, you can just imagine what it was going to be like and get back to work.

Noam Chomsky: My Response to #OccupyWallStreet With #OccupyWallStreet, the linguist and political critic sees a reason for hope that lies closer to home. By **Noam Chomsky** When Guernica interviewed Noam Chomsky in 2009, it seemed notable that he was emphasizing “hopes and prospects.” This was the title of his book and to be hopeful, Professor Chomsky was having none of it when it came to the newly elected President Barack Obama. Aside from the credit he gave to protest movements in the sixties for electing a black president, much of the hope he saw in the 21st century world he had to find to the south, in Latin America, among the presidents of the “pink tide” movement there who initially fought as true populists and union leaders (Lula in Brazil), rose from poverty, and beat back privatization (Evo Morales in Bolivia).

Public News Service January 20, 2011 CHARLESTON, W.Va. - Tuesday's party-line vote in the U.S. House to repeal last year's health-care reform is not popular with two doctors who are also members of the West Virginia state Senate. Sen. Ron Stollings, who has practiced medicine in Madison for 22 years, says West Virginia badly needs more rural health care, and the reform will help. He says it's already helping streamline care at practices such as his by paying for the transition to electronic records.

[2009] An Oral History of the Bush White House January 28, 2003 Bush delivers his State of the Union message and continues to make the case for war with Iraq. The speech includes the assertion, later shown to be based on a crude forgery, that Saddam Hussein has “recently sought significant quantities of uranium from Africa.” The administration had been warned that the information was unreliable.

EU Court Of Justice Says Software Functionality Is Not Subject To Copyright We've been following the legal fight between SAS and World Programming Limited (WPL) for quite some time. If you don't recall, WPL essentially recreated some functionality of SAS's offering, not by copying the software itself or the source code, but basically by reading SAS's manuals about what its software did. The UK's High Court said this did not infringe, and the case got kicked up to the European Court of Justice (which has been pretty good on copyright issues lately). In the fall, the EU Advocates General recommended that the court make clear that software functionality is not subject to copyright, and it appears that's exactly what the court has now done. In a relatively short ruling, the court points out that, while software itself may be covered by copyright, "the ideas and principles which underlie any element of a computer program, including those which underlie its interfaces, are not protected by copyright."

Dennis Kucinich and Chris Hedges on the 99 Percent - Truthdig Radio Dennis Kucinich and Chris Hedges on the 99 Percent Posted on Oct 6, 2011 This week on Truthdig Radio in collaboration with KPFK: Rep. Dennis Kucinich and Chris Hedges explain why the 99 percenters are “the best among us.” Medicaid: Supreme Court to rule on California Medicaid payments to providers UConn Emphasizes Defense In Blue-White Spring Game EAST HARTFORD — Defense – clap, clap – defense … The UConn football team was all about defense Saturday during the annual Blue-White Spring Game played before 6,500 at Rentschler Field. The scoring system was kind of quirky.... Dolson, Hartley Expected To Go Early In WNBA Draft Winning nine national championships, one World Championship and an Olympic gold medal gives Geno Auriemma the forum to tell WNBA coaches and general managers what he thinks.

India court: Insisting on condom not grounds for divorce 4 May 2012Last updated at 03:20 ET The Bombay High Court has ruled that a wife's refusal to have sex with her husband without a condom does not constitute grounds for divorce. Pradeep Bapat told the court his wife Prerna refused to have children because they were not financially stable. The judges said Mr Bapat's other grounds for divorce, a lack of cooking and cleaning skills on his wife's part, were also not grounds for divorce. They said arranged couples should get to know each other before marrying. Americans are still split on health care reform, but only 18% favor a total repeal: poll Dharapak/AP Obama has vowed to fight any efforts to repeal the health care reform he fought to pass. Though Republicans have vowed to get rid of Obama's sweeping health care reform as quickly as possible, it turns out most Americans don't want the legislation repealed entirely. A new Washington Post-ABC News poll released Tuesday found that only 18% are in favor of completely ejecting the health care overhaul passed last year, which Republicans dubbed "Obamacare."