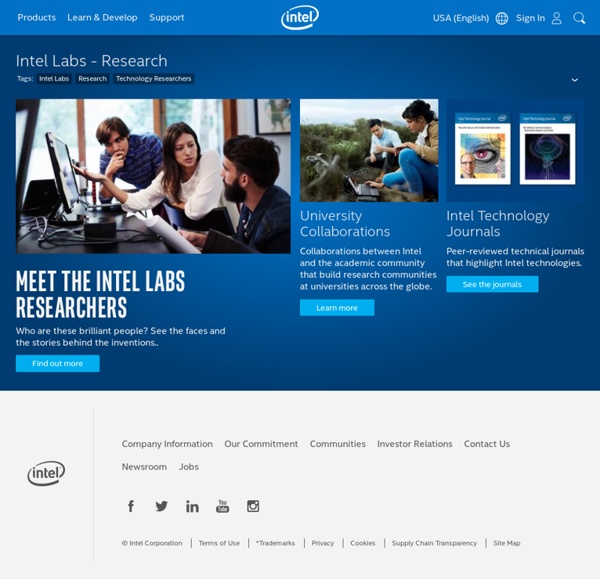 TBB Home CRD: High Performance Computing Research Department C++, Development Tools, Java, Open Source, Web... the world of s Center for Advanced Computing Research » exascale computing Professor Peter Kogge University of Notre Dame March 12, 2010 2PM 147 Noyes Abstract DARPA recently funded a 2 year study of the technical challenges of trying to go from today’s petascale computing to exascale – 1000X – in roughly half the time it took to get from terascale to petascale. This talk will summarize this study, with a particular focus on the most far-reaching of the challenges, namely energy. Bio Dr.

The Airport Extreme, version n, dissected. Apple recently released their first "n-capable" base station. As usual, this base station is packaged in a beautiful case, whose form factor appears to have been chosen expressly to fit under a Apple-TV™ or Mac Mini™. Moreover, unlike previous base stations, it's design nods towards the need for cooling: The base station incorporates an intake strip around the edge at the bottom of the case, and the crease along the top is acts as an exhaust. Under the top cover, a thick heat sink acts as a case as well as a RFI shield. After prying off the white plastic top, I also see no reason why the base station cannot be mounted vertically on a wall - the heat sink has plenty of exposure and is only warm to the touch. The cooling warts aside, it is a worthy successor to the previous generation of Extreme stations. Another cool new feature is the ability to attach a printer and/or a hard drive to the base station. Despite the heat issues and the annoying software situation, there is a lot to like.

Concurrency models for the D programming language Practical use of shared qualifier? d coder <dlang.coder <at> gmail.com> 2011-03-08 01:19:42 GMT Greetings I lately came across usefulness of "shared" qualifier in section 13.12.1. After reading the section, I guess I need to use shared qualifier more frequently than to just make sure that global variables are not treated thread-local. I think I need to make all class objects that would be accessed by multiple threads shared as well. I tried to follow this on the application I am developing. Another issue is that the std container library does not seem to work with shared objects. Kindly let me know if I am missing something. I am kind of stuck right now. Regards - Puneet _______________________________________________ dmd-concurrency mailing list dmd-concurrency <at> puremagic.com

Distributed and High-Performance Computing (DHPC) Group Maurice Herlihy's Home Page Bio Maurice Herlihy has an A.B. in Mathematics from Harvard University, and a Ph.D. in Computer Science from M.I.T. He has served on the faculty of Carnegie Mellon University, on the staff of DEC Cambridge Research Lab, and is currently a professor in the Computer Science Department at Brown University. He is the recipient of the 2003 Dijkstra Prize in Distributed Computing, the 2004 Gödel Prize in theoretical computer science, the 2008 ISCA influential paper award, the 2012 Edsger W. Selected Talks CS176: Multiprocessor Synchronization 2011 course on Combinatorial Topology and Distributed Computing (YouTube) 2011 Fulbright Distinguished Chair lecture (YouTube) 2004 Gödel Prize lecture (slides) Books