The Most Futuristic Predictions That Came True in 2012 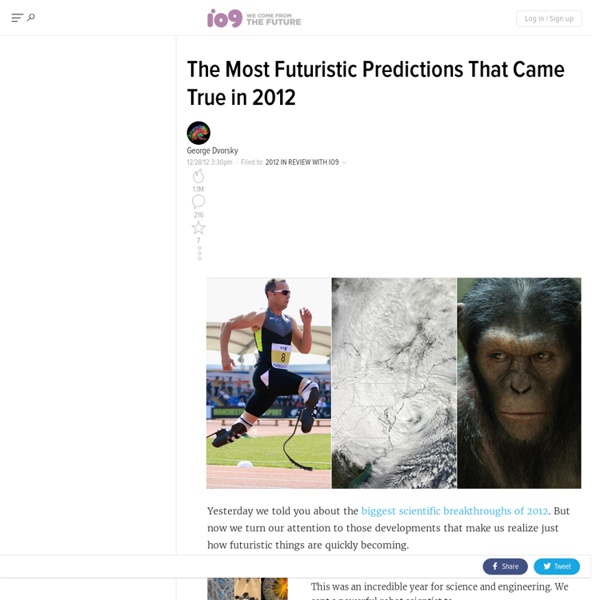 15 Deadliest Beach Creatures Keep away from any of these 15 deadly creatures when you next visit the beach. 1. Portuguese Man-of-War Jellyfish Not a true jellyfish, the Portuguese Man-of-War is a siphonophore – a colony of organisms living together. Found mainly far out in the sea, it can be seen swarming or floating with thousands of organisms grouped together. Dermochelys coriacea, commonly called leatherback sea turtles, feed on these sea creatures.

Did You Know? Check out our sponsor PartyCasino.com Feel It! Immersive Cocoon // Step Into The Future Directed & 3D CG by Oliver Zeller, Video Courtesy of I-Cocoon The world of interfaces continues to evolve and surprise us. We still think of it as something we can hold, fold and place in our bag to carry anywhere. What if you can be part of an intuitive and holistic experience where your interface is not reduced to a mouse-click or a two dimensional tablet screen. Welcome to the Immersive Cocoon, a surround display dome with sophisticated motion sensor technology that inspired the technology depicted in 'Minority Report'.

SETI Institute The Secrets of Happiness Forget about money. Don't fret about youth. Acting happy is likely to make you happy. There are happy people. John Pugh: Will Ingestible Micro Computers Be The Doctors Of The Future? Imagine if on your next doctors visit, instead of going through all the examinations, your doctor simply handed you a pill and sent you on your way. They may look like normal pills, oblong and a little smaller than a daily vitamin, however they are in fact fully functional ingestible computers, which travel your system and transmit back data. It sounds like something straight out of science fiction, but is it really that far off? Proteus Digital Health of Redwood City, California, has created a ‘smart pill’ system that helps patients and caregivers monitor dosages. Inside these pills are tiny sensors and transmitters.

Concept Clothing Responds To Social Situations Goldsmiths, University of London graduate Lilian Hipolyte Mushi has designed concept clothing specifically for introverts to help them in a highly extroverted world. The project, which the designer has titled An Introvert’s Transformation to Extroversion, consists of specific components that ‘react’ when someone gets too close to the wearer. The piece of clothing includes wooden arms that fan out at the back when built-in distance sensors detect someone within 80 centimeters of the wearer. A pleated hood covered in thermochromic pigments changes colors in response to body heat if the wearer feels embarrassed or shy. There is also a garment with pleated sleeves that becomes stiff when heated, again as a response to the wearer’s body temperature. According to Lilian, the concept clothing ‘explores how introverts use isolation as a mechanism for social recharge as well as a way to navigate social situations.’

Absolutely mindblowing video shot from the Space Shuttle during launch Unless I'm misreading the speedo, the word "transonic" is used somewhat inaccurately. If I'm not mistaken, the vehicle went transonic quite a bit before this point. The visible shockwaves only go on for a range of about 100mph, which seems too short for the passage from the initial transonic range to supersonic. What the producer seems to mean is that it is going supersonic (passing the sound barrier).

The Future Of Education Is Outside The Classroom The world is currently facing monumental education challenges. Decades of standardized testing, fear of technology, and fixation on memorization have impacted the world’s youth negatively and kept them from reaching their human potential. In a recent documentary, the telecommunications provider Ericsson sheds light on shifts happening in the worlds of various educators and the learning industry at large. Watch the documentary below and take a look at our key takeaways from the film: Seth Godin believes the education system is scam. While many kids can sit for hours, take notes, and repeat what they learned 3 weeks later, some kids do not learn this way.