One iPad in the classroom? - Ideas for use 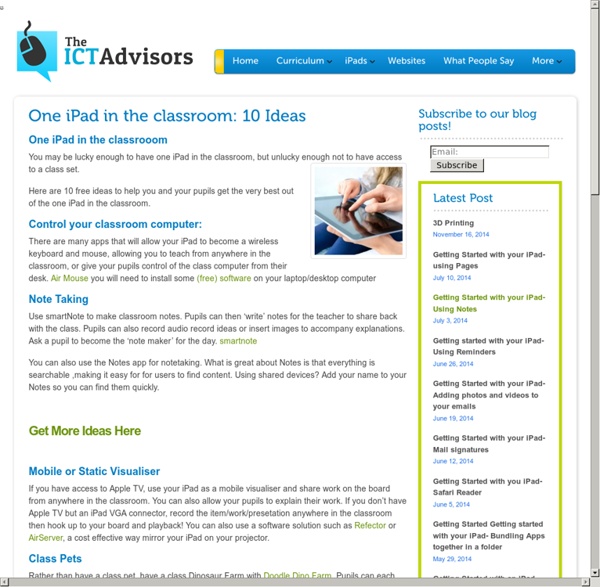 One iPad in the classrooom You may be lucky enough to have one iPad in the classroom, but unlucky enough not to have access to a class set. Here are 10 free ideas to help you and your pupils get the very best out of the one iPad in the classroom. Control your classroom computer: There are many apps that will allow your iPad to become a wireless keyboard and mouse, allowing you to teach from anywhere in the classroom, or give your pupils control of the class computer from their desk. Air Mouse you will need to install some (free) software on your laptop/desktop computer Note Taking Use smartNote to make classroom notes. You can also use the Notes app for notetaking. Get More Ideas Here Mobile or Static Visualiser If you have access to Apple TV, use your iPad as a mobile visualiser and share work on the board from anywhere in the classroom. Class Pets Rather than have a class pet, have a class Dinosaur Farm with Doodle Dino Farm. Share ideas Collaborate Story Making & Telling A Globe or Google Earth

10 Simple Tips For Better Teaching With Tablets by Ravi Bhatt, iAnnotate Software Developer Teachers can’t escape the growing trend of technology in the classroom. It’s more than just hype. More schools are buying tablets for use in the classroom, with Apple’s tablet sales to the education sector doubling last year. As a mobile software company whose product is used extensively in education, we dream big about the future of technology in the classroom. Are you tempted to join the trend? 1. Ensure curriculum is tablet-friendly. 2. Practice before you deploy. 3. Nexus 7s and 10s are not iPads are not Windows Surface Tablets. Accordingly, you’ll need to test-drive the selection of the tablets students will use. 4. While you should take the lead on developing and driving the overall plan for tablets in your classroom, build in time for your students to demo new apps and mobile tech that they have discovered on their own. 5. Consider limiting access to the internet. Build in tech time-outs. Go to the full review at Teach Thought

Apptivities Using The iPad Photo Stream To Develop Collaborative Learning As part of an ongoing project at Bellfield Primary School in Hull, year 5 are studying the book Pig Heart Boy by Malorie Blackman. This week's lesson was based around issues related to animal rights and medical research. The children had access to iPad Minis which were connected to the school's wireless network. Sharing resourcesBy creating a photo stream, resources for the day could be shared with the pupils. These included photos, success criteria and examples of work. Pupils could then take copies of the content and annotate and present as they chose. Discussion and collaborationThe most powerful feature when sharing content via the photo stream in the classroom is the commenting facility. There are many applications for this such as:Collaborative projectsDebatesFeedback and formative assessmentShared and guide writing.Maths strategy sharing/discussionSharing vocabulary Modelling sentence structuresMini Plenaries

The Teacher's Guide To The One iPad Classroom Today, I’m going to tell you a fairy tale: Once upon a time, my mother in law (a third grade teacher) was in her classroom at school when her principal walked in and gave her an iPad for her class to use. Well, technically it was supposed to be for the entire third grade to share, but that’s almost beside the point. After some initial excitement, she discussed how the entire third grade was supposed to share a single iPad with her fellow third grade teachers, and the iPad was promptly banished into a drawer, never to see the light of day again. The end. Wait, should I have warned you that the fairy tale didn’t have a happy ending? Unfortunately, it isn’t an isolated incident. Use apps for….. ….And more!

iPad Apps that work with Smartboards | Apps in Education The iPad looks amazing when projected onto a large screen. The students in a 1 to 1 iPad classroom gets to see the apps at work. Have a look at the list below to see if any of these might be useful in your classroom. Doceri: FREETurn your iPad and classroom computer into an Interactive Whiteboard with Doceri. SplashTop: $5.49 AUThis is the ONLY remote desktop app that streams video and audio from your PC or Mac, allowing you to interact with your PowerPoint, Keynote, Word, Excel, Outlook, Quicken, IE, Firefox, Safari, World of Warcraft, and other PC / MAC applications. Edistorm: FREEEdistorm is an online brainstorming tool that uses the metaphor of sticky notes to allow you to brainstorm. Exploriments Series: