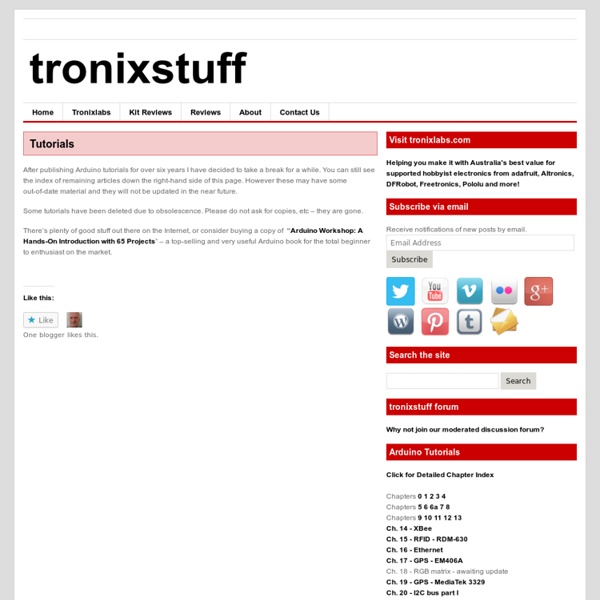 This is the start page for our series of over fifty Arduino tutorials. Each tutorial from chapter zero to thirteen will cover a variety of topics and lessons, then from chapter fourteen each chapter will cover a particular topic. If you are looking to learn about the world of Arduino – this is a great place for beginners to start, or for more experienced users to brush up on their knowledge. Scroll down to read the contents of each chapter. New tutorials, lessons and other articles of interest are announced via twitter, Google+, RSS feed and by email – to keep up, subscribe using the form in the column to the right. If you’d rather have a great book on Arduino – check out my new book “Arduino Workshop” from No Starch Press. But what is it? Arduino is an open-source electronics prototyping platform based on flexible, easy-to-use hardware and software. Over semi-regular intervals you will find a new instalment of my tutorials. Chapter Zero – updated 24/11/2012 Chapter Two Chapter Four

Getting started with Arduino! – Chapter Zero Hello world! Updated 24/11/2012 Please join with us as we learn about electronics and the Arduino! Together through this series of tutorials I would like to share with you a journey of learning, exploration and fun with the Arduino system, and make some enjoyable, useful, interesting, useless and practical things. These posts will be published on a regular basis, on top of the other non-micro controller posts. Instead of listening to someone talking really quickly on a video, you can read and follow through at your own pace, see examples in action, learn a great deal – and be inspired to make something of your own.

Arduino Tutorial: An Introductory Guide Update! Don’t miss our famous article:Ã‚ Top 40 Arduino Projects of the Web. Previously we introduced you to the Arduino and itÃ¢â‚¬â„¢s awe-inspiring incredibleness. Arduino and GSM Cellular – Part One « t r o n i x s t u f f Connect your Arduino Uno or compatible to the cellular network with the SM5100 GSM module shield. This is chapter twenty-six of a series originally titled “Getting Started/Moving Forward with Arduino!” by John Boxall – A tutorial on the Arduino universe. ASK AN EDUCATOR! – “Whats the difference between Arduino, Raspberry Pi, BeagleBoard, etc?” June 18, 2012 AT 8:21 am Bruno asks: I’m a self-taught DIY’er, and have been learning electronics for some time now. As i’ve started building my 1st 3d printer, i have to use an Arduino Mega 2560. I’d rather learn how to use an Arduino properly, instead of just dumping code into it and let it run.So my question is, what is the difference between a microcontroller (Arduino and Arduino-like platforms) and something like a BeagleBoard/Bone or a RaspberryPi (I realise these a full-blown computers)? What are they intended uses for each type of platform; when should you use one or the other?

Geiger Counter - Radiation Sensor Board for Arduino Contents Go to IndexManifesto The main finality of the Radiation Sensor Board for Arduino is to help people in Japan to measure the levels of radiation in their everyday life after the unfortunate earthquake and tsunami struck Japan in March 2011 and cause the nuclear radiation leakages in Fukushima.

Arduino Tutorial - Lesson 5 We've done a lot so far, blinking lights, printing messages...all of that stuff is output: signals coming from the Arduino. The next step is to start playing with input, with the Arduino responding to outside events. In this lesson we will begin with the most basic kind of input, a push-button switch! You're probably familiar with switches, there's tons of them in your house. One kind of switch you use every day is a light switch.

The proper way to put an Arduino in a Raspberry Pi For all their hoopla, the GPIO pins on the Raspberry Pi aren’t terribly useful on their own. Sure, you can output digital data, but our world is analog and there just isn’t any ADCs or DACs on these magical Raspi pins. The AlaMode, a project designed by [Kevin], [Anool], and [Justin] over at the Wyolum OSHW collaborative aims to fix this.

Windmeter / Anemometer by Infidigm Overview The Windmeter is an anemometer designed to measure and record wind speed distribution from 0 to 17+ meters per second. It was designed for high reliability, ease of construction, and for a wide environmental range.