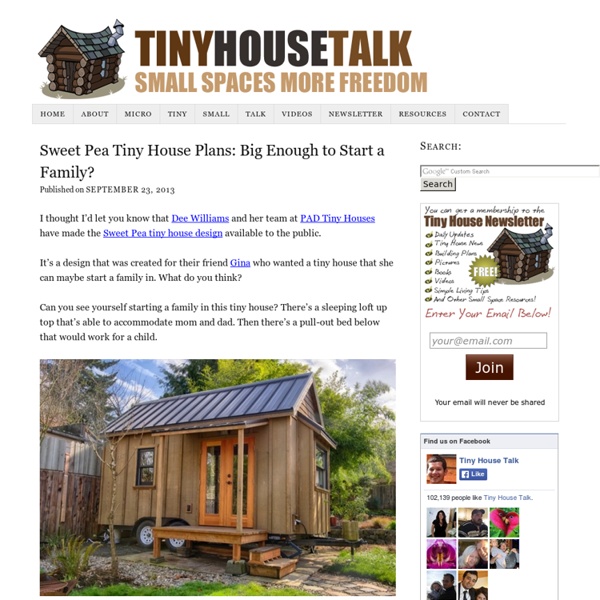 Published onSeptember 23, 2013 I thought I’d let you know that Dee Williams and her team at PAD Tiny Houses have made the Sweet Pea tiny house design available to the public. It’s a design that was created for their friend Gina who wanted a tiny house that she can maybe start a family in. What do you think? Can you see yourself starting a family in this tiny house? There’s a sleeping loft up top that’s able to accommodate mom and dad. Photos by Chris Tack Do you think this tiny house is spacious enough for a young family who enjoys simplicity? Sweet Pea Tiny House Plans: Do You Think it’s Enough to Start a Family In? Exterior – Hitch Side I love the little bump out that gives you just that little bit of extra space. Interior of the Sweet Pea Tiny Home I really like how there’s a lot of open space when you come in. Looking Towards the Sleeping Loft and Kitchen Pretty Big Kitchen for a Tiny House, Right? Closet Space Bathroom in the Sweet Pea Tiny House Bedroom Sleeping Loft

French carpenters craft whimsical off-grid tiny house hamlet A few years ago, a group of carpenters (and friends) began building tiny homes on a property in southwest France using material from the woods, tools from the past (and present) and the freedom afforded by relying on their own labor. Today the forested land looks straight out of a fairy tale. There’s a tiny mud house with a living roof, a handcrafted caravan home perched above wagon wheels, a wood-heated bathtub (and a jacuzzi run off timber scraps), a bicycled-powered wood carving machine, an earthen bread/pizza oven, an underground wine and cheese cellar (AKA the “hobbit-iere”), experimental gardens and a chicken coop treehouse. Menthé was one of the original homesteaders, who along with his friend Yogan (the landowner), built the original mud cabin for winter; they created large doors on both sides of the structure so their cars could be connected as heated bedrooms.

Deconstructing luxury in small home + tiny cabin + treehouse After several decades as an airline executive (including Delta president, Virgin America CEO, and Lufthansa president & CEO), Fred Reid could have built a McMansion, but instead he chose to grow his home without taking on debt and embracing nature by adding small outbuildings. When Reid bought his aunt’s Sonoma County property, he wanted to “recapture the indistinguishable border between indoors and outdoors that I had as a child in Ethiopia”. Instead of tearing down her tiny cottage, he made enlarged it a bit and opened it up to the outdoors with floor-to-ceiling windows or doors in nearly all the rooms, including the shower and toilet room.

Hans Liberg's Secluded Music Studio Log Cabin on October 27, 2015 This is the Dutch music performer, Hans Liberg’s, secluded music studio log cabin designed by Piet Hein Eek. At a first glance it just looks like a big stack of logs. But once the window shutters are opened you can see that it’s actually a micro cabin! And it’s perfectly set up to create and play music while being away from everything else. Pretty awesome, isn’t it? Creative Compulsive Disorder: Remembering Zina Nicole Lahr This short clip about artist and maker Zina Nicole Lahr may be as tragic as it is beautiful. Earlier this fall Lahr approached her friend Stormy Pyeatte and asked if they might shoot a quick video for her portfolio. The video was shot and edited in just two days and demonstrates Lahr’s insatiable desire to build, invent, and “bring life to something inanimate,” a process she called her “creative compulsive disorder.” Almost unthinkably, Lahr was killed in a hiking accident in Colorado on November 20th, a few weeks after this was shot.

Tiny House In The Outback Once upon a time, I lived in Australia for a while, the thing that remember so clearly is how big the country is and how much space is available. The country is the size of the US, with a population well under 25 million, where 80% of that population lives within 50 miles of the coast, this means that the interior of the continent is very very empty. There is a strong sense of quasi cowboy feel to being in the outback, where I lived while I was there. This house not only captures that sense of the rough and tumble of the bush, but is sustainable too. In an odd way this prefab structure has a turret feel, almost medieval. This prefabricated structure is sited in an isolated mountainous of Australia.

Small Family Home with a "Treehouse" Attic by Yuki-Miyamoto Set in a residential district of Tokyo, this small family home has been designed around the needs of its owners and their wish to maintain a connection with nature. The project was undertaken by local architect Yuki Miyamoto, who had the challenge of creating a suitable home on the 936 (87 square meters) site. The house itself is much smaller than the site, occupying an area of just 370 square feet (34.4 square meters). These People May Have Lost a Limb, but Not Their Sense of Style Dec 10, 2013 Bespoke Innovations was founded in 2009 by Industrial Designer Scott Summit and Orthopedic Surgeon Kenneth Trauner. Their mission is to ‘bring more humanity to people who have congenital or traumatic limb loss’ [source]. Bespoke Innovations build and design fairings, specialized coverings that surround an existing prosthetic leg, accurately recreating the body form through a process that uses three-dimensional scanning to capture the unique leg shape. Fairings are designed for, and with, the amputee.

Steel Clad 350 Sq. Ft. Modern Cabin on Stilts with Shutters on August 15, 2014 Check out this 350 sq. ft. low-maintenance and virtually indestructible modern cabin on stilts with steel shutters. The owner’s hired Olson Kundig Architects to build a weekend cabin that could provide them with a rural retreat during their get-aways to Washington’s Olympic National Park. House in Tsurumaki / Case-Real Architects: Case-Real Location: Tokyo, Japan Architect in Charge: Koichi Futatusmata, Yasushi Arikawa Structural Engineer: Hirofumi Ohno(Ohno Japan) Construction: Yoshida Building Firm Lighting Plan: Tatsuki Nakamura Area: 61.2 sqm Project Year: 2013 Photographs: Takumi Ota From the architect. A detached house standing in the high density residential area in Tokyo. The site for this project was one of the 5 subdivided areas with the North side facing the street, and the other 3 sides neighboring the other houses. Within these difficult circumstances the client wished for a living room on the South side full of sun light.