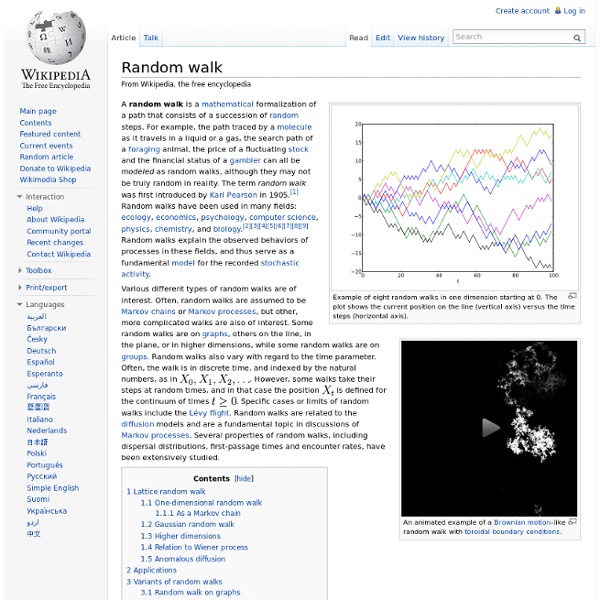 Example of eight random walks in one dimension starting at 0. The plot shows the current position on the line (vertical axis) versus the time steps (horizontal axis). A random walk is a mathematical formalization of a path that consists of a succession of random steps. For example, the path traced by a molecule as it travels in a liquid or a gas, the search path of a foraging animal, the price of a fluctuating stock and the financial status of a gambler can all be modeled as random walks, although they may not be truly random in reality. The term random walk was first introduced by Karl Pearson in 1905.[1] Random walks have been used in many fields: ecology, economics, psychology, computer science, physics, chemistry, and biology.[2][3][4][5][6][7][8][9] Random walks explain the observed behaviors of processes in these fields, and thus serve as a fundamental model for the recorded stochastic activity. Various different types of random walks are of interest. . . Lattice random walk[edit] .

Markov chain A simple two-state Markov chain A Markov chain (discrete-time Markov chain or DTMC[1]), named after Andrey Markov, is a mathematical system that undergoes transitions from one state to another on a state space. It is a random process usually characterized as memoryless: the next state depends only on the current state and not on the sequence of events that preceded it. This specific kind of "memorylessness" is called the Markov property. Markov chains have many applications as statistical models of real-world processes. Introduction[edit] A Markov chain is a stochastic process with the Markov property. In literature, different Markov processes are designated as "Markov chains". The changes of state of the system are called transitions. A discrete-time random process involves a system which is in a certain state at each step, with the state changing randomly between steps. Many other examples of Markov chains exist. Formal definition[edit] . . of states as input, where is defined, while and

Poisson process In probability theory, a Poisson process is a stochastic process that counts the number of events[note 1] and the time that these events occur in a given time interval. The time between each pair of consecutive events has an exponential distribution with parameter λ and each of these inter-arrival times is assumed to be independent of other inter-arrival times. The process is named after the French mathematician Siméon Denis Poisson and is a good model of radioactive decay,[1] telephone calls[2] and requests for a particular document on a web server,[3] among many other phenomena. The Poisson process is a continuous-time process; the sum of a Bernoulli process can be thought of as its discrete-time counterpart. A Poisson process is a pure-birth process, the simplest example of a birth-death process. Definition[edit] Consequences of this definition include: Other types of Poisson process are described below. Types[edit] Homogeneous[edit] Sample Path of a counting Poisson process N(t) , where .

Probability These concepts have been given an axiomatic mathematical formalization in probability theory (see probability axioms), which is used widely in such areas of study as mathematics, statistics, finance, gambling, science (in particular physics), artificial intelligence/machine learning, computer science, and philosophy to, for example, draw inferences about the expected frequency of events. Probability theory is also used to describe the underlying mechanics and regularities of complex systems.[4] Interpretations[edit] When dealing with experiments that are random and well-defined in a purely theoretical setting (like tossing a fair coin), probabilities can be numerically described by the statistical number of outcomes considered favorable divided by the total number of all outcomes (tossing a fair coin twice will yield head-head with probability 1/4, because the four outcomes head-head, head-tails, tails-head and tails-tails are equally likely to occur). Etymology[edit] History[edit] where