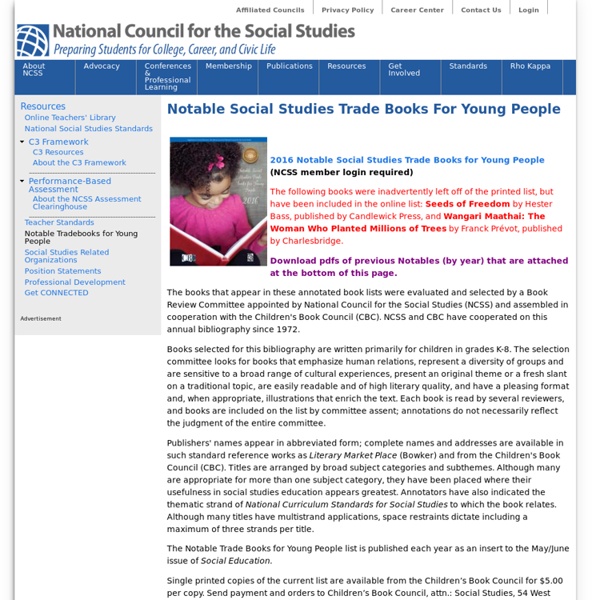 2016 Notable Social Studies Trade Books for Young People (NCSS member login required) The following books were inadvertently left off of the printed list, but have been included in the online list: Seeds of Freedom by Hester Bass, published by Candlewick Press, and Wangari Maathai: The Woman Who Planted Millions of Trees by Franck Prévot, published by Charlesbridge. Download pdfs of previous Notables (by year) that are attached at the bottom of this page. The books that appear in these annotated book lists were evaluated and selected by a Book Review Committee appointed by National Council for the Social Studies (NCSS) and assembled in cooperation with the Children's Book Council (CBC). NCSS and CBC have cooperated on this annual bibliography since 1972. Books selected for this bibliography are written primarily for children in grades K-8. The Notable Trade Books for Young People list is published each year as an insert to the May/June issue of Social Education. Related:  Collection Development

Best Books For Kids and Teens - CCBC How to Assess Books for Relevance to ELLs In this excerpt from English Language Learners: The Essential Guide, ELL researchers David and Yvonne Freeman offer a comprehensive set of tips for choosing culturally relevant books in the ELL classroom. They also offer a number of book recommendations and a rubric that teachers and students can use to determine whether a book is culturally relevant. Question #1: Are the characters in the story like you and your family? I Love Saturdays and domingos Francisco is a third-grade bilingual teacher working with Hispanic children in a small city on the California coast. He recently received Ada's I Love Saturdays and domingos (Ada, 2002) as a gift because he and his Anglo wife have a four-year-old daughter. The characters in this book mirror his own family. Francisco read the story to his class and then explained that his daughter, Maya Esmeralda, has English-speaking and Spanish-speaking grandparents like the characters in the story. Rice All Day The Tortilla Factory Going Home The Name Jar

Home Young Adult Award Winners *YALSA has launched the new Teen Book Finder Database, which is a one-stop shop for finding selected lists and award winners. Users can search this free resource by award, list name, year, author, genre and more, as well as print customizable lists. This new resource will replace the individual award and list web pages currently on YALSA’s site that are not searchable and that are organized only by year. Looking for great teen books? While these books have been selected for teens from 12 to 18 years of age, the award-winning titles and the titles on YALSA's selected lists span a broad range of reading and maturity levels. Book Awards Learn more about the Alex Awards, Edwards Award, Morris Award, Odyssey Award, Nonfiction Award, and Printz Award and read speeches from winners Selected Book & Media Lists Teen Book Finder App Find YALSA's award-winning books and media and selected lists wherever you are with this app, funded by the Dollar General Literacy Foundation. Best of the Best

tlc.simplek12 Common Core Learn implementation strategies as well as how to access specific state standards. Over 50 webinars! iPads in Education No matter if you're a 1:1 classroom or if you only have one iPad, we have webinars that fit your needs! Digital Storytelling Spark creativity and innovation by helping students create and share original, multimedia works online. Google Learn the ins and outs of Google apps and tools. Mobile Learning - General Discover hundreds of ideas for using mobile devices offline to motivate learners. Blended Learning Have you "flipped" your classroom yet? Classroom Management You'll find out exactly how to control the uncontrollable student and how to get at-risk students back on track. Time Saving Tools Tick, Tock! Communication & Collaboration Engage students online, increase student participation, and have better discussions in the classroom. Virtual Teaching & Learning Teaching online has its own set of unique challenges. Social Media in Education Digital Media eBooks Games

Spanish-Language Literature Resources Compiled by the Cooperative Children's Book Center Updated: December, 2013 This listing of resources about Spanish-language books for children and teens has been developed in response to the need for Spanish-language materials in schools and libraries. The listing includes the following: Sources for Spanish-Language Book Recommendations and Suggestions Sources for Recommended Books with Latino cultural content Distributors of Spanish-language books for children and teens This list is a work-in-progress. Sources for Spanish-Language Book Suggestions Caldecott Winners Translated into Spanish: from San Diego Public Library via Isabel Schon Internationl Center for Spanish Books for Youth El día de los niños/El día de los libros (Children’s Day/Book Day): national initiative promoting literacy for children of all cultures; annual booklist includes (but not limited to) Spanish and bilingual titles Essential Guide to Spanish Reading for Children and Young Adults (pdf): from AmericaReadsSpanish

Awards | Dia de los Libros A list of awards and grants that might be of interest to those who celebrate Día in their library and community is compiled below. Américas Award –The Consortium of Latin American Studies founded the Américas Award in 1993 to encourage and commend authors, illustrators and publishers who produce quality children’s and young adult books that portray Latin America, the Caribbean, or Latinos in the United States, and to provide teachers with recommendations for classroom use. CLASP offers up to two annual book awards, together with a commended list of titles. Center for the Study of Multicultural Children’s Literature Día grant – The Center for the Study of Multicultural Children’s Literature awards an annual grant to a library whose Día program has an African American Focus. Estela and Raúl Mora Award – Established by Día founder, Pat Mora, and her siblings in honor of their parents, the Mora award and honors are presented annually to the most exemplary Día celebrations.

Ctr for the Study of Multicultural Children's Lit Newbery Medal Home The Newbery Medal was named for eighteenth-century British bookseller John Newbery. It is awarded annually by the Association for Library Service to Children, a division of the American Library Association, to the author of the most distinguished contribution to American literature for children. New Kid, written and illustrated by Jerry Craft, published by HarperCollins Children’s Books. The Undefeated, written by Kwame Alexander, illustrated by Kadir Nelson, and published by Versify, an imprint of Houghton Mifflin Harcourt. The Undefeated “is for us.” Scary Stories for Young Foxes, written by Christian McKay Heidicker, illustrated by Junyi Wu, and published by Henry Holt and Company, an imprint of Macmillan Publishing Group. Seven foxes, in the dark and twisted Antler Wood, want to hear scary stories. Other Words for Home, written by Jasmine Warga, published by Balzer + Bray, an imprint of HarperCollins Publishers. Genesis Begins Again, written by Alicia D.

Caldecott Medal Home The Caldecott Medal was named in honor of nineteenth-century English illustrator Randolph Caldecott. It is awarded annually by the Association for Library Service to Children, a division of the American Library Association, to the artist of the most distinguished American picture book for children. Hello Lighthouse, illustrated and written by Sophie Blackall, published by Little, Brown and Company, a division of Hachette Book Group, Inc. Masterful ink and watercolor illustrations illuminate the story of a lighthouse and the family inside. Stunning images of the lighthouse in all kinds of weather alternate with views of intimate interior detail and circular motifs. “Children will delight in immersing themselves in the captivating discoveries each new look at Hello Lighthouse will bring,” said Caldecott Medal Committee Chair Mary Fellows. Alma and How She Got Her Name, illustrated and written by Juana Martinez-Neal, published by Candlewick Press. Thank you, Omu!

Let's Read in Spanish OmniLibros Find recently published (since 2010) English-language children's literature that promotes global understanding through this annotated bibliography. Choose the Indices tab to search by title or grade level. Narrow the search using the keyword search tool. Be sure to check out the Book Map, and find books by country. tag(s): book lists (120), cross cultural understanding (105), literacy (102), maps (282) In the Classroom This site is perfect for finding reading material with settings from all over the world. Latin@s in Kid Lit 50+ Picture Books about Mixed Race Families A bit late to the party, seeing that Mixed Heritage Week ended yesterday! But with ever-increasing numbers of multiracial families (growing three times as fast as the US population as a whole!), these picture books are relevant at any time of the year. I found so many lovely children’s books about multiracial families that the list just kept growing longer and longer… 50+ Picture Books about Mixed Race Families Babies & Toddlers 15 Things Not to Do with a Babyby Margaret McAllister Don’t lend your baby to a kangaroo, don’t let it play with an elephant and don’t plant it in the garden! Where’s Lenny? Where’s Lenny? Let’s Feed the Ducks // Let’s Go To Playgroup // Let’s Have Fun // Let’s Go to Bedby Pamela Venus I could only find information on Let’s Feed The Ducks but not on the other three of this beautifully illustrated series of board books. Oscar’s Half Birthdayby Bob Graham A multiracial family celebrates baby Oscar’s Half birthday with a fun outing to the park. Preschool What a Family!