The Teacher's Guide To The One iPad Classroom 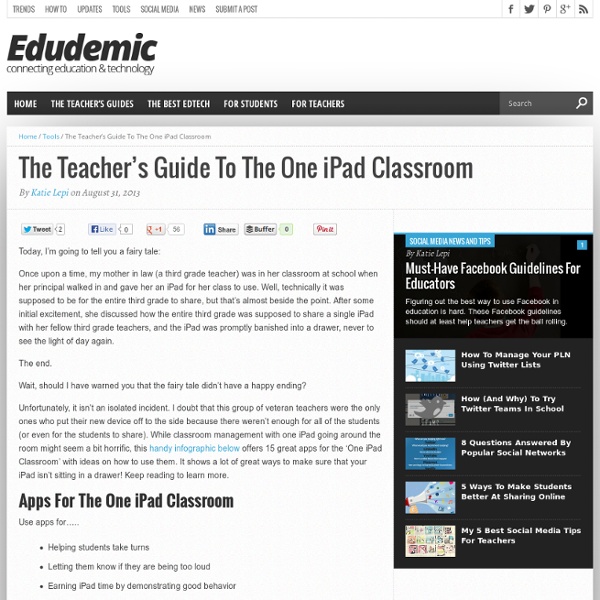 Today, I’m going to tell you a fairy tale: Once upon a time, my mother in law (a third grade teacher) was in her classroom at school when her principal walked in and gave her an iPad for her class to use. Well, technically it was supposed to be for the entire third grade to share, but that’s almost beside the point. After some initial excitement, she discussed how the entire third grade was supposed to share a single iPad with her fellow third grade teachers, and the iPad was promptly banished into a drawer, never to see the light of day again. The end. Wait, should I have warned you that the fairy tale didn’t have a happy ending? Unfortunately, it isn’t an isolated incident. Use apps for….. ….And more!

How To Setup Parental Controls (Restrictions) on the iPad The iPad is a wonderfully easy and intuitive device to use. This is generally nothing but a major advantage – but at times it can cause issues if you have children who share your iPad or are allowed to use it from time to time. Problems you might encounter range from a child inadvertently deleting a frequently-used app to discovering that your child’s favorite new iPad game has allowed them to rack up hundreds of dollars worth of charges to your credit card via In-App purchases. Fortunately, the iPad (and iOS) comes with a strong set of parental controls that you can choose to apply to reduce the chances of seeing any problems when you allow your kids to use an iPad, it’s a shared one or one of their own. On the iPad these are called Restrictions – and here’s a quick rundown of how they can be setup: You’ll find these controls in the iPad’s Settings app – under Settings > General > Restrictions.

transferring-worksheets-to-your-ipad Transferring worksheets to your iPad Recently I shared a photo with all of you with my daughter using printables I created on the iPad. Several people emailed me and asked how I did that. So, today I am giving a tutorial on how to do that. How To Connect An iPad To A Smartboard It’s really simple–so simple that you’re going to feel silly for not having already known this–and if you tweet this out to a colleague without checking out the stunning simplicity of it all, you’re going to feel crunchy (remember that term?) later when you realize it wasn’t quite the revelation you’d thought it might be. Context If you’ve only got one iPad, or are trying to guide the entire class through an activity, the classroom projector can act as a modeling tool for students to follow along. By displaying the iPad on the projector, you’ve got an easy way to broadcast your screen–or a student’s screen during a presentation–to the entire class. What You Need

Projecting Your iPad Wirelessly - Without an Apple TV Important update: May 6, 2012 - Mirror to your Windows PC as well Shortly after the release of Relection a second mirroring solution called AirPlay was released - available at Reflection and Airplay both allow mirroring of an iOS device to a Mac. Many site members had asked about a solution that would allow mirroring to a Windows PC. In its latest update, Airplay has now added a version that will allow mirroring to a PC as well. When iOS 5 was released many of us were thrilled with its ability to allow projection (mirroring) of your iPad to a projector using Airplay and Apple TV. iPad Apps that work with Smartboards The iPad looks amazing when projected onto a large screen. The students in a 1 to 1 iPad classroom gets to see the apps at work. Have a look at the list below to see if any of these might be useful in your classroom. If you have others that should be added to this list please leave a comment with the name of the app and we will add it to the list. Doceri: FREETurn your iPad and classroom computer into an Interactive Whiteboard with Doceri.

EdTech Workshop: 5 Ways I'm Using Apps in the Classroom As I'm wrapping up week #2 teaching language arts in a 4/5 1:1 iPad environment, I thought I would try a "5 ways..." type of post. One of my many goals this year is to be a better sharer, so I am pushing myself to blog each week and to try different styles of writing. Let me know what you think, please! 1. Apps for Student Blogging Using The iPad Photo Stream To Develop Collaborative Learning As part of an ongoing project at Bellfield Primary School in Hull, year 5 are studying the book Pig Heart Boy by Malorie Blackman. This week's lesson was based around issues related to animal rights and medical research. The children had access to iPad Minis which were connected to the school's wireless network. Sharing resourcesBy creating a photo stream, resources for the day could be shared with the pupils.

Bloom's Taxonomy for The iPad Langwitches has recently updated his phenomenal post on the The iPad Apps for Bloom Taxonomy. This post has an awesome aggregation of iPad apps organized according to Blooms HOTS ( Higher Order Thinking Skills). If you are a teacher or educator and have not yet read about Bloom's Taxonomy then let me tell you that you are missing out on a great resource of educational insight. One of the most popular posts here in Educational Technology and Mobile Learning is Bloom's Taxonomy: The 21st Century Version.

10 Simple Tips For Better Teaching With Tablets by Ravi Bhatt, iAnnotate Software Developer Teachers can’t escape the growing trend of technology in the classroom. It’s more than just hype. iPad Multimedia Tools Keynote can do much more than simple slides with text and images! In this hands on session, we’ll explore new tools that let you draw, annotate, animate, audio record, and make videos. We’ll look at how students are using these tools to create animations, digital storytelling, clipart, and more.