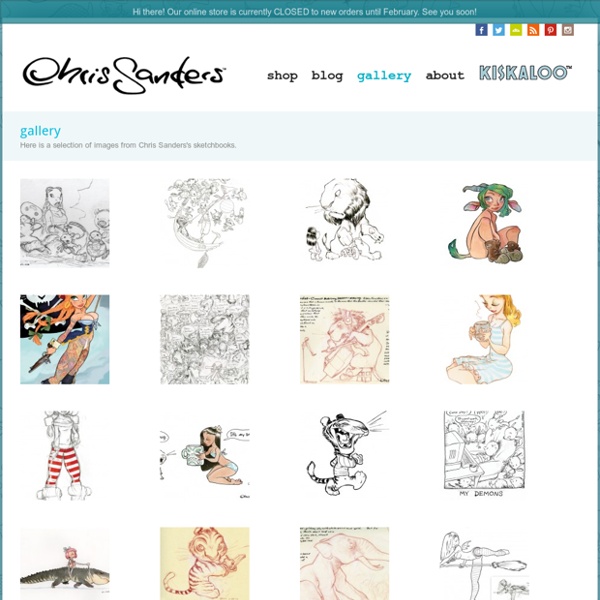 Tiny Whimsical Porcelain Creatures Anya Stasenko and Slava Leontyev is a duo of Ukrainian artists creating tiny whimsical porcelain creatures. Each sculpture is painted with a wildly imaginative and creative array of painstakingly detailed and brilliantly colorful designs. Given the tiny size of these creatures (most measure anywhere from 4 to 40cm), it was all the more surprising that Stasenko and Leontyev weren’t actually trained to work with ceramics. One is a graphic artist and the other is a painting teacher. They chose to work with ceramics simply because of economic reasons and because of the relative ease with which the material can be worked.

10 Favorites: Wall-Mounted Desks for Children (and Teens) Older 10 Favorites: Wall-Mounted Desks for Children (and Teens) by Julie Carlson Issue 8 · Winter Break · February 26, 2014 Newer Issue 8 · Winter Break · February 26, 2014 Even More Disney Princess/Star Wars Crossovers A while back, we featured a small series from artist Ralph Sevelius which showed a few Disney characters as Jedi or Sith warriors. Now he’s back with an expanded series, one that adds even more princess character parodies. New additions include Sith Elsa, the best new character from Disney’s Frozen, Carbonite Aurora (hah, that’s clever), Slave Leia Jasmine (amazing) and bounty hunter Mulan. Check out the entire series, including the older ones, below. 12 Awesome Home Organization Ideas People usually say that “there’s no place like home”. Well, we’d rather say that there’s no better place to live than a clean and organized house. Yeah, we know: it seems like we’re making chit chat and talking about something that everyone already knows. The thing is that we know great home organization secrets and applying them to your house can spare you a lot of time, time you can spend relaxing. Ah, now we got your attention!

Impressive Real-Life (Human) Disney Princesses Details Category: Tech Published on 06 April 2012 Written by Faizul Azri This article is about the first season of the television series. For the first season of The Walking Dead video game series, see The Walking Dead: Season One. The primary characters of the first season include (from left to right): Amy, Shane, Glenn, Carl, Lori, Rick, Dale and Andrea. Darabont's original pilot script was split in half and embellished, making the first two episodes instead of one, "...just to slow the narrative down and dig into the characters more deeply, so it's not just plot-driven, event-driven stuff. You really want to drag these characters into the equation

Artist Paints Ocean Stones With Thousands Of Tiny Dots To Create Colorful Mandalas Elspeth McLean, an Australian artist based in Canada, creates hypnotizing paintings of mandalas on smooth and perfectly round ocean stones that will soothe your soul and fill your wold with color. She paints her beautiful explosions of color with tiny dots, which makes her works even more symmetrical and soothing. Her rocks are insanely popular, and sell out of her Etsy shop very quickly! But she also has tons of other artwork, so be sure to take a look! More info: Etsy | elspethmclean.com | Facebook (h/t: mymodernmet) Beautiful stones and other artwork can be found on McLean’s Etsy shop. 500 × 332 - pinterest.com 236 × 341 - pinterest.com 736 × 563 - pinterest.com 206 × 225 - pinterest.com

Cute Shelter Dog Photobooth Pics Help Them Find Forever Homes The Humane Society of Utah, an animal rescue and adoption organization in the U.S., is back with more wonderful shelter dog photobooth pics. Their ongoing project was started with the intent of casting these dogs in a more positive light to help them find forever homes. With the help of pet photographer Guinnevere Shuster (a professional photographer who also helps black dogs get adopted), the Center aims to show these dogs the way they’d really look if you allowed them into your life – out from behind the metal bars that contain them at the shelters they live in. These photos capture these dogs’ individual personalities, and it looks like the approach works – the dogs that get the photobooth treatment get a lot of attention, and many of them get adopted as well.

The Spirit Lantern (Green Fire 2.0) Green fire is ubiquitous on the web, and making it is remarkably straightforward - provided you are not led astray, as I was, by ... let's call it poetic license. Now, after having had a rather disappointing Halloween at chez Green, when I read that a purported "chemistry teacher" found using isopropyl alcohol, rather than methanol, resulted in "a fire that alternated from orange to blue to green" and that it was "pretty cool," I now understand that to mean "after the third whippit, the normal blue and orange flames of the rubbing alcohol looked kind of green. Then I passed out." The rules of making green fire are as simple as they are inviolate: 1) use methanol

Movie-Inspired Cupcakes By DreamWorks Animator Past a certain point, food art becomes so beautiful that you become unsure if you’d actually eat and ruin something so beautiful. Fernanda Abarca, an incredibly talented animator for DreamWorks who also creates realistic cakes, cupcakes and sugar sculptures, passed that point ages ago. Her detailed edible sculptures and cake toppers bring characters from popular animated movies to life. Given her work as an animator for beloved movies like Kung Fu Panda and How To Train Your Dragon, it makes sense that her cake boutique, located in southern California, also primarily serves the entertainment industry.