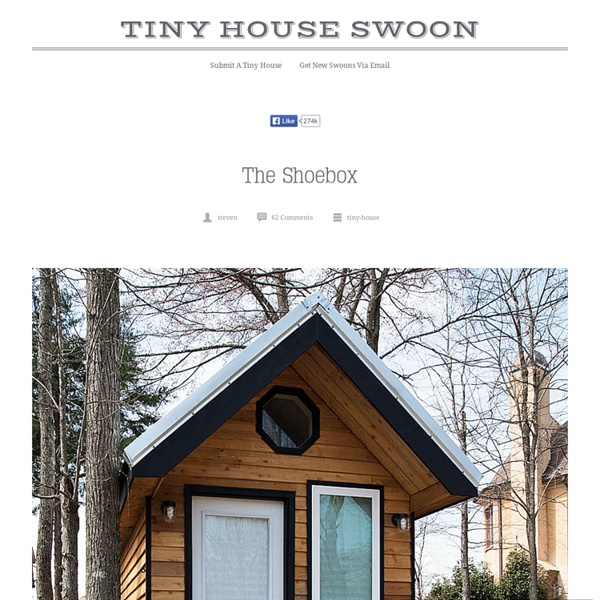 Gammelgarn Mattsarve / LLP Arkitektkontor Architects: LLP Arkitektkontor Location: Ängmansvägen, 623 69 Katthammarsvik, Sweden Architect in Charge: LLP arkitektkontor AB, Mattias Palme architect SAR/MSA Engineer: Björn Yttergren, Tyréns AB. Building Proprietor: Lisa and Martin Johansson Builder: Byggria/Laszlo Nemeth Area: 62.0 sqm Project Year: 2012 Photographs: Robin Hayes From the architect. The summerhouse is located along an old countyside road going inland from Katthamarsvik on Gotlands eastern coast. A Low Impact Woodland Home Built In Wales - Simon Dale - Includes A 1 Minute 42 Second Video A Low Impact Woodland Home Built In Wales You are looking at pictures of a house I built for our family in Wales. It was built by myself and my father in law with help from passers by and visiting friends. 4 months after starting we were moved in and cosy.

The Greenhouse. The “Greenhouse”, as it has been dubbed, was built right into the hillside and includes an outdoor deck with bath, a fully operational kitchen, and a reclaimed redwood platform bed that hangs from the ceiling by steel rods. It’s all about minimal living in this single room dwelling, and with so much nature surrounding it, inside the walls and out, furniture and accessories are almost unnecessary. Please enable JavaScript to view the <a href=" powered by Disqus.</a> How soccer works. SCORE 110

Unlimited Thinking For Limited Spaces July 23, 2009 by Robin Plaskoff Horton Three young German architects have created a new area of architecture: arbo-architecture. Ferdinand Ludwig and fellow architects, Oliver Storz and Hannes Schwertfeger, call their new specialty “building botany.” As part of this, the three men are building structures made from plants as well as studying the elasticity of plane trees and examining how effectively willows can grow around steel pipes at the University of Stuttgart’s Institute of Basics in Modern Architectural Design. In this way, they plan to begin building an eight-meter (26-foot) tower near Lake Constance in southern Germany at the end of July.

La Casa Móvil A solar-powered tiny house on wheels in Spain. More info. and photos here (translated to English). A LIVING HOUSE – Terreform’s Fab Tree Hab Inspired by the ecocentric attitudes of such beloved American nature-lovers as Thoreau, Emerson, Whitman and Alcott, three MIT designers – Mitchell Joachim, Lara Greden and Javier Arbona – created this living treehouse in which the dwelling itself merges with its environment and nourishes its inhabitants. Fab Tree Hab dissolves our conventional concept of home and establishes a new symbiosis between the house and its surrounding ecosystem. In order to build the arboreal frame, the designers utilize “pleaching” – a gardening technique in which tree branches are woven together to form living archways. Trees such as Elm, Live Oak and Dogwood bear the heavier loads, while vines, branches and plants form a lattice for the walls and roof of the house. The interior structure is made of cob (clay and straw), a tried and true green building approach, that lends itself to customized shaping of walls and ceilings.

Less is the New More: Making the Most of Small Spaces Good Design For Living in Small ApartmentsAs people migrate to smaller spaces, good design helps a lot. This is something they figured out in Europe long ago, that if you don't have a lot of horizontal room you can go vertical. Tumidei in Italy makes some of the nicest stuff, like this unit with lots of storage under the bed. This unit just raises the floor high enough for beds to slide under. Foldable Solar-Powered Geodesic DOM(E) Home Can be Erected Anywhere Imagine if you could pack your own Geodesic Dome, pop it up anywhere in the world and feel safe, sheltered and warm? Well, that dream could become reality if NRJA's design for a prefabricated, off-grid DOM(E) hits the market. The 120 square meter home features a self-supporting structure that is well-insulated to ensure the best living conditions, and it also boasts a small rainwater and solar collection system.