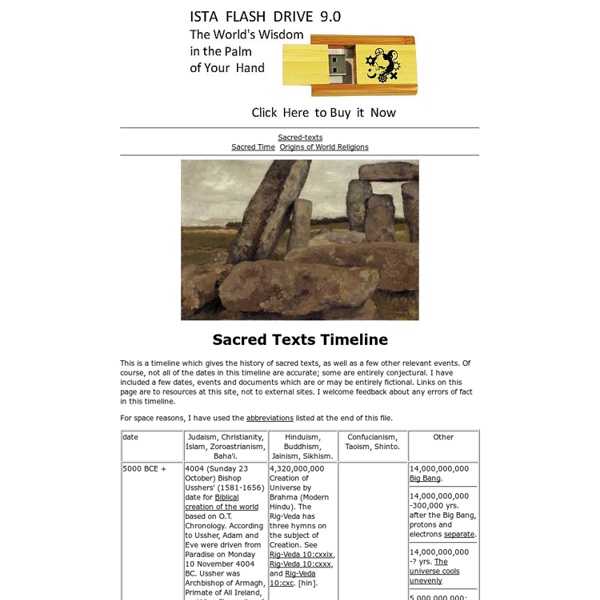 Sacred-textsSacred Time Origins of World Religions This is a timeline which gives the history of sacred texts, as well as a few other relevant events. Of course, not all of the dates in this timeline are accurate; some are entirely conjectural. I have included a few dates, events and documents which are or may be entirely fictional. Links on this page are to resources at this site, not to external sites. I welcome feedback about any errors of fact in this timeline. For space reasons, I have used the abbreviations listed at the end of this file. Key to Abbreviations auth. = author. b. = born ca. = circa Can. = Canonicalization Cent.= century. Cod. = Codification comp. = composition. d. = died hist.= accepted historical date o.c= date of original (typically, although not necessarily oral) composition. Orig. = original O.T. = Old Testament. p.v. = printed version Rev. = Revised. trad. = traditional date trans. = translation w.v. = written version [bhi] Baha'i [bud] Buddhism [tib] Tibetan Buddhism [hin] Hinduism

The Travels Of Scarmentado by Voltaire I WAS born in Candia, in the year 1600. My father was governor of the city; and I remember that a poet of middling parts, and of a most unmusical ear, whose name was Iro, composed some verses in my praise, in which he made me to descend from Minos in a direct line; but my father being afterwards disgraced, he wrote some other verses, in which he derived my pedigree from no nobler an origin than the amours of Pasiphae and her gallant. This Iro was a most mischievous rogue, and one of the most troublesome fellows in the island. My father sent me at fifteen years of age to prosecute my studies at Rome, There I arrived in full hopes of learning all kinds of truth; for I had hitherto been taught quite the reverse, according to the custom of this lower world from China to the Alps. Monsignor Profondo, to whom I was recommended, was a man of a very singular character, and one of the most terrible scholars in the world.

Canaan Canaan (Northwest Semitic knaʿn; Phoenician: 𐤊𐤍𐤏𐤍; biblical Hebrew: כנען / knaʿn; Masoretic: כְּנָעַן / Kənáʿan) was during the 2nd millennium BC a Semitic-speaking region in the Ancient Near East, roughly corresponding to the Levant, i.e. modern-day Lebanon, Israel, Palestinian territories, the western part of Jordan and southwestern Syria. The name remained the endonym of the region later known to the Ancient Greeks from c.500 BC as Phoenicia. Linguistically, the Canaanite languages form a group within the Northwest Semitic languages; its best-known member today is the Hebrew language, being mostly known from Iron Age epigraphy. Other Canaanite languages are Phoenician, Ammonite, Moabite, and Edomite. Etymology[edit]

- Jerusalem Dome of the Rock, Jerusalem, Israel (Enlarge) Jerusalem, by virtue of the number and diversity of people who have held it sacred, may be considered the most holy city in the world. To the Jewish people it is Ir Ha-Kodesh (the Holy City), the Biblical Zion, the City of David, the site of Solomon's Temple, and the eternal capital of the Israelite nation. To Christians it is where the young Jesus impressed the sages at the Jewish Temple, where he spent the last days of his ministry, and where the Last Supper, the Crucifixion and the Resurrection took place.

Why is Jerusalem important to Jews Christians and Muslims Universal Answers It is so important because it is where their faiths started and it contain holy lands. God also chose Jerusalem as His own. Three religions in the world have chosen Jerusalem to be there holy land these are Muslims, Jews and Christians. Many people go there every year and there are many riots and arguments about people's religions. Jerusalem is very significant to all God's People and is considered Holy Land by the 3 major religions in the world, the Judaism, Islam and Christianity. These 3 religious groups came from one family, the family of Abraham. List of undecidable problems Problems in logic[edit] Problems about abstract machines[edit] The mortal matrix problem: determining, given a finite set of n × n matrices with integer entries, whether they can be multiplied in some order, possibly with repetition, to yield the zero matrix. (This is known undecidable for a set of 7 or more 3 × 3 matrices, or a set of two 21 × 21 matrices.[2])Determining whether a finite set of upper triangular 3 × 3 matrices with nonnegative integer entries generates a free semigroup.Determining whether two finitely generated subsemigroups of Mn(Z) have a common element. Problems in combinatorial group theory[edit]

‘Origin of Speeches’ says Edenic language is programmed in our brains October 24, 2009 by arking I recently finished reading The Origin of Speeches: Intelligent Design in Language, a fascinating book by Edenics scholar Isaac E. Mozeson. Edenics is a linguistics project undertaken to study the original human mother tongue called Edenic, the language given to Adam in the garden of Eden. What did the Knights Templar Do The Knights Templar were created by the pope to escort and protect "tourists" going to the Holy Land, and to fight Muslims there. There were originally only a handful, but there were thousands by the time they were disbanded in the 1300's. They were the first bankers. A person could deposit money at one Templar institution, receive a voucher, and turn it in at any other Templar institution.

Memories of the East Village Art Scene In a strictly hedonistic way, Eileen’s Reno Bar was integral to the East Village community. A narrow pocket of surrealism on Second Avenue between 11th and 12th, its ceiling surfaced in plastic jade plant—brown plastic jade plant—Eileen’s had its flaccid nights of dead-room tone. But most evenings brought a steady influx of pre-op transsexuals, clueless walk-ins, bisexual drug dealers, garrulous drunks with a schizophrenic flair, Ricardo Montalban types from Europe lusting after chicks with dicks, and a few black-humored fags like myself, who much preferred the Reno Bar’s nightly Halloween party to clocking the aging process in some drippy gay bar. Eileen’s had the carnal whoop-de-do of a fetish convention. It was also full of crack whores working the track on 11th Street. One Eileen’s habitué named Joel wore a walrusy mustache and the woebegone, sagging face of the chronically defeated.

Polygamy in the Bible — Rick Beckman When you think of polygamy, what do you think of? The Mormons? Islam or Muhammad? Maybe you think of Big Love? If you are a Christian, though, I want to give you something else to think of when the subject of polygamy comes up. You see, our minds shouldn’t be instinctively drawn to the world, its false faiths, and its entertainment, when there are loftier subjects to focus on. A Timeline of World Civilizations for Mythology Mythology seeks to explain the world and thus reflects the culture, events, and history of the societies that create the stories handed down as myths. Egypt’s Nile River and its cycle of overflowing its banks leaving fertile ground as it receded became the basis for Egyptian religion that demanded that the people help the gods prevent anything from interfering with the cycle. Myths form around the founding of cities, including Athens and Rome — about 10,000 to 2,500 years ago, respectively — and the founding of civilizations, including the creation myths passed down in virtually every culture. Chinese and Native American myths account for astrological occurrences as well as for more earth-bound events such as the Toltec invasion of the Mexican city of Teotihuacan in 900 CE.