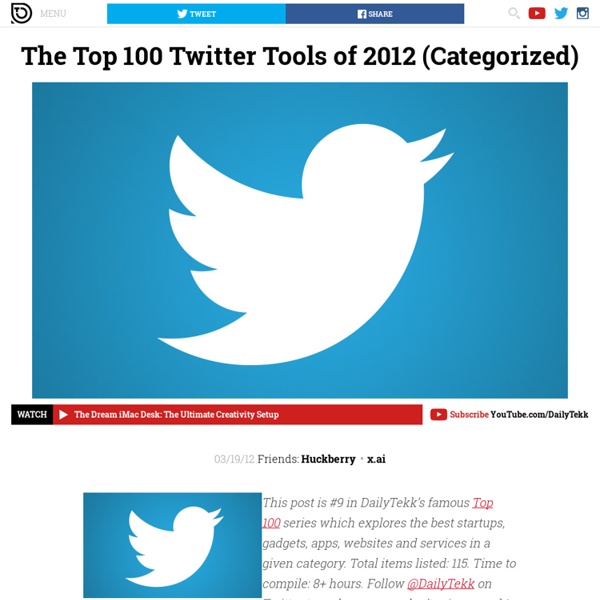 This post is #9 in DailyTekk’s famous Top 100 series which explores the best startups, gadgets, apps, websites and services in a given category. Total items listed: 115. Time to compile: 8+ hours. Follow @DailyTekk on Twitter to make sure you don’t miss a week! Twitter is my social network of choice (see our recent article: Inside Twitter). Personally, I’m not a big Facebook user (but I do appreciate the traffic it sends to DailyTekk). To be sure, there are far more than 100 third party Twitter tools available but many tools of them are either shady or shoddy and did not make this list. There’s more to this article!

The Once Secret World of Buying Twitter Followers If you missed Fast Company’s trending article on StatusPeople, a service that analyzes Twitter accounts to see who has bought their followers, you must live under a rock. My little brother, who hates technology and has never been active on Twitter at least heard about Rhianna being called out for having tons of fake followers. I admit that he only found out about the dirty scheme of buying Twitter followers because he was listening to a popular radio show, but this news was prominent across every social media network so if you didn’t know, it about time you pay attention. So the word is out, people buy fake followers, but why?

25 Twitter Accounts That Will Make You Smarter Twitter can sometimes seem more like a newspaper or encyclopedia than a social network. Its intelligent user base contributes a wealth of knowledge to the microblogging platform. Experts of various fields tweet constantly, and their followers can learn a lot simply by reading their 140-character updates. We found 25 Twitter accounts that will increase your general knowledge of a wide range of topics: science, technology, human rights, the environment and more. These individuals and general fact-toting accounts will help you engage in intelligent discussions — so you can impress your friends and family.

My 5 Biggest Twitter Tips Before you read the rest of this, let me say a few words. I am by no means an expert in Twitter ( @edudemic ) and do not claim to be. Twitter, like every other social media tool, is just another piece to connecting you with online resources. Whether you’re a new user of Twitter or a seasoned expert, the following tips are meant to act as a refresher for anyone feeling like Twitter hasn’t been doing as much for them as they’d hoped. Twitter can be a rewarding yet cumbersome tool that requires constant supervision. That means it could be very difficult to manage for most full-time teachers, administrators, and really anyone who has responsibilities.

100+ Google Tricks for Teachers It's Google's world, we're just teaching in it. Now, we can use it a little more easily. With classes, homework, and projects–not to mention your social life–time is truly at a premium for all teachers, so why not take advantage of the wide world that Google has to offer? From super-effective search tricks to Google tools specifically for education to tricks and tips for using Gmail, Google Docs, and Google Calendar, these tricks will surely save you some precious time.

The 100 Best, Most Interesting Blogs and Websites of 2012 (Categorized) Editor’s note: 2015’s list of the best, most interesting websites has arrived! I don’t know about you, but I’m constantly running into so many cool websites I want to remember or recommend to people but I don’t always have time to make a note of them, add them to Evernote, bookmark them in Delicious, etc. So this is a good example of a post I created as a personal (and completely unscientific) resource that other people will probably benefit from as well. Some of these sites are pretty new while others have been around for a while now, but they are all awesome right now in 2012. So whether you are looking for a way to catch up on the latest Internet trends, want to find some exciting new content to load into your favorite news aggregating app or are just bored and need to waste some time online, this list represents hours of potential discovery. You might also like:

m.guardian.co.uk Facebook and Twitter accounts on mobile phones will be used to access government services under new proposals. Photograph: Dan Kitwood/Getty Images The government will announce plans later this month to allow people to use social networking sites to access public services. Twitter, PLEs and PLNs Thought I would share some bits of my thesis on Twitter, PLN’s and PLE’s as others might find it useful. What is a PLN? For all of the conversation occurring among educators about PLNs, there has been surprisingly little academic research on PLNs (Couros, 2010, p. 123). A Parents’ Guide to Twitter and Education As an educator, there are tons of great hashtags available to find the resources I'm looking for. Hashtags are usually found at the end of a 140 character tweet. I think of them like television channels, only there are many more to choose from and you can even create your own for your organization or team. Today, the most widely used educational hashtag on Twitter is called #edchat.

Are stock prices affected by social media? - FTSE Global Markets According to a survey of 360 UK financial professionals carried out by Colt Technology Services, social media sites such as Twitter and Facebook are affecting share price volatility. The research found that 63% of respondents, including brokers and heads of trading desks, believe the valuation of individual stocks can be directly linked to public sentiment contained in social media channels. While only 7% of respondents regard social media sentiment as an important indicator, just under half (45%) of respondents regard it as a trailing indicator, demonstrating that social media definitely has a role to play. Firms such as hedge funds and proprietary trading houses are now able to scan social media data at random and then categorise messages into one of a range of public mood states. The firms then use algorithmic or high frequency trading strategies to place trade orders, enabling them to potentially steal a march on competitors who trade using more traditional forms of data.

Twitter Inching Closer To Giving You All Your Tweets, But Search Has A Long Way To Go Twitter is working on a project that will give users access to an archive of all of their own tweets. Twitter CEO Dick Costolo told the New York Times this week that the company is building a tool that would let Twitter users download their own tweets. He didn’t provide a timeframe for such a tool to be ready. Twitter search is notoriously shallow.

Twitter in classroom. Part 1. Twitter has been dramatic change for me as an educator. I was already active user of Facebook in my leisure and also in work, but it was Twitter, which really make a change. Suddenly educators around the world were part of my PLN. I had many questions about Finnish education and got many good tips, links and information in my use. Im interestid in social media in education, so Twitter is at moment best chanel update your information. Like I said on my first post, I develop my personal learning network following from TweetDeck simultaneoysly my friends, my lists, favorites, mentions, messages, new followers, different hashtags like #edchat #edtech #mlearning.

Twitter Lists – What they are and How to Use Them Effectively In the top right hand side of your Twitter account you can view your followers, following, tweets and Lists. You may know what the first three mean but just tend to ignore the ‘Lists’ tab But ignore Lists at your peril. Why would I want to put Tweeters into a list?