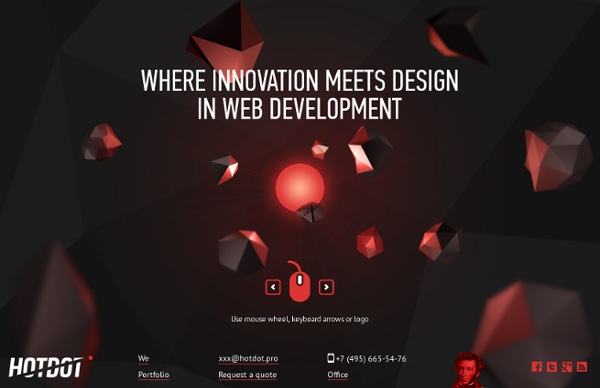 Use of Blur Backgrounds in Website Design: Beautiful Examples Together with wide screen photo backgrounds which are frequently used tools for website decorations, blur backgrounds have thoroughly settled and found their niche in modern website design. Although, at first glance, it is rather difficult to understand what could be so amazing and attractive in blur technique that instantly kills all the detail of spectacular shot or image. But as a matter of fact, it has a whole bunch of advantages that, on the contrary, helps to stress aesthetic side, and make your design sophisticated and elegant. In addition, such backgrounds are able to add readability to your titles and taglines, focus attention on specified elements, easily make foreground elements stand out, and finally contrast and highlight color schemes. So, if you want to have a closer look at clever vague effect realization you should definitely turn your attention to our collection that includes remarkable examples of websites with blurred backgrounds. Reflection

PIXELIS : Create & tell true brand Stories Graphic Design & Web Design Brisbane | Twofold Creative Demo for Alice's Adventures in Wonderland, by Lewis Carroll 'There's certainly too much pepper in that soup!' Alice said to herself, as well as she could for sneezing. There was certainly too much of it in the air. 'Please would you tell me,' said Alice, a little timidly, for she was not quite sure whether it was good manners for her to speak first, 'why your cat grins like that?' 'I didn't know that Cheshire cats always grinned; in fact, I didn't know that cats COULD grin.' 'I don't know of any that do,' Alice said very politely, feeling quite pleased to have got into a conversation. 'You don't know much,' said the Duchess; 'and that's a fact.' Alice did not at all like the tone of this remark, and thought it would be as well to introduce some other subject of conversation.

Jess & Russ She bought a Smashing Pumpkins album, painted stars on her bedroom ceiling, and felt emotional. He kissed a real girl at the annual latin camp dance social. Spoiler alert: he didn't marry her. Almost four years ago, fate and a few mouse clicks brought Russ Maschmeyer and Jessica Hische together. They went from complete strangers to inseparable companions in work and love. He graduated from NYU and shlepped his belongings to Greenpoint Brooklyn. She set up her first studio: a shared workspace with a gaggle of new illustration friends. She worked for Louise Fili from 9-6 and spent 7-2am at her studio in Greenpoint. Dressed as a sparkly penguin, she marched in The Mummer Parade in Philadelphia. Due to her work schedule, a long distance relationship blossomed and fizzled. They barely had time to eat (let alone date) with their crazy schedules. She posted her profile and was barraged by a boatload of d-bags. She stumbled across his profile and made the first move—she 'winked' at him.