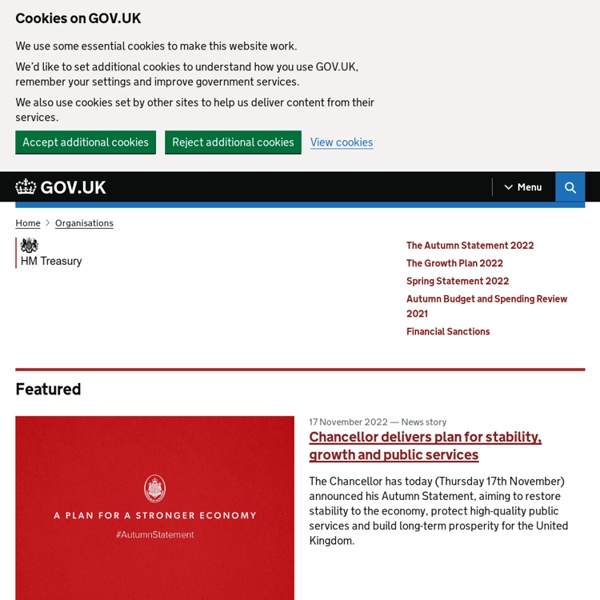 Business Tesco’s chief hits out as profit warning hits shares The new boss of Tesco has attacked his predecessors for adopting “artificial” tactics to hit aggressive profit targets in the final few months of each financial year. Tesco’s shares plunged by 10 per cent to 168p on a warning this morning that the chain’s profit for the year to February will be no more than £1.4 billion, well short of the £1.94 billion that investors had been anticipating. New Scotland Yard sold to Abu Dhabi Financial Group The Metropolitan Police has cashed in… Last updated at 11:20AM, December 9 2014 Asos accused of “baffling” accounting Retail experts in the City have rounded on Asos for adopting “baffling” accounting techniques by using a fire insurance payout to support its profit projections for the year.

HM Treasury In english The Treasury building viewed from St. James' Park The new eastern entrance to HM Treasury Her Majesty's Treasury (HM Treasury), sometimes referred to as the Exchequer, or more informally the Treasury, is the United Kingdom government department responsible for developing and executing the British government's public finance policy and economic policy. History[edit] The beginnings of the treasury of England is traced by some to an individual known as Henry the Treasurer a servant to the king of England, William the Conqueror.[5][6][7] The surety of this beginning is based on an entry in the Domesday Book showing the individual Henry ("the treasurer") as a Winchester landowner, known to be the place where the royal treasure was stored.[8] The Treasury of the United Kingdom traces its origins to the Treasury of the Kingdom of England, which had come into existence by 1126, in the reign of Henry I. The prefix of the department name is changed depending upon who is the reigning monarch.

The Top 5 Facts About America’s Richest 1% | Daily Ticker Follow The Daily Ticker on Facebook here! The American dream is alive and well for the wealthiest 1% of Americans, but unfortunately, if you are in the other 99% the jury is still out. "America is obviously a country where you can go from being middle class to upper class, but right now class mobility has sort of collapsed in the United States," says Zaid Jilani, senior reporter for the progressive think tank ThinkProgress.org. (See: America's Middle Class Crisis: The Sobering Facts) This grim reality is in part the impetus for the Occupy Wall Street movement, which, now in its fourth week, will take to the streets of Manhattan's Upper East Side Tuesday in what it is calling the "Millionaire's March." As the Occupy Wall Street movement continues to grow, The Daily Ticker wanted to find out just how rich America's super-rich 1% really is. As discussed in the accompanying interview, here's what Jilani outlined on his blog: #1) The Top 1% Owns 40% of the Nation's Wealth: See also:

David Smith's EconomicsUK.com Austerity myths revisited Posted by David Smith at 01:00 PM Category: Thoughts and responses My piece on Friday, The Myth of Abandoned Austerity, has attracted quite a lot of interest. It had a simple aim - to demonstrate that fiscal consolidation, deficit reduction, continued throughout the parliament, alongside recovery. Simon Wren-Lewis, a professor of economics at Oxford, devoted a blog post to it, here. Jonathan Portes, director of the National Institute of Economic and Social Research, was typically condescending, tweeting that I was "confused (& confusing)". Let me respond to Simon. But Simon answers the question himself: “I know this cannot be the case because I have never said that austerity was abandoned in 2012. That means, he suggests, that I am guilty of creating a straw man. This is not quite the same, of course, as economists that Simon might know saying austerity has been abandoned. (More...)

Slavery Footprint - Made In A Free World Ministerial role Chancellor of the Exchequer Sajid Javid was appointed Chancellor of the Exchequer on 24 July 2019. Political career Sajid Javid was Home Secretary from 30 April 2018 to 24 July 2019. He was Secretary of State for Housing, Communities and Local Government from 8 January 2018 to 29 April 2018, and Secretary of State for Communities and Local Government from July 2016 to January 2018. Sajid served as Secretary of State for Business, Innovation and Skills from May 2015 until July 2016. Career outside politics Before being elected MP, he worked in business and finance. Just Business - Educational Resources with a Global and Ethical Dimension for Teachers and Students of Economics and Business Studies