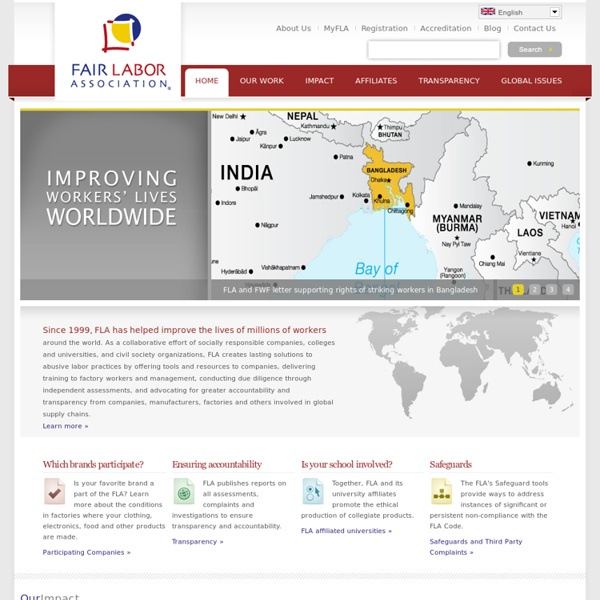 Since 1999, FLA has helped improve the lives of millions of workers around the world. As a collaborative effort of socially responsible companies, colleges and universities, and civil society organizations, FLA creates lasting solutions to abusive labor practices by offering tools and resources to companies, delivering training to factory workers and management, conducting due diligence through independent assessments, and advocating for greater accountability and transparency from companies, manufacturers, factories and others involved in global supply chains.Learn more »

Are There Too Many Ph.D.s And Not Enough Jobs? Our country needs more people with science, math and engineering degrees — at least, that's the common refrain among politicians and educators. American students lag behind the rest of the world when it comes to math and science test scores, and the president and others have called for a change in immigration laws that would make it easier for people who come to the U.S. to get technical degrees to stay in the country permanently. The number of PhD students who had a job by graduation has been going down, while the numbers of those who didn't or those who were continuing with studies is going up. But job numbers released by the National Science Foundation show that people with doctoral degrees in those technical fields are struggling to find work in their industries.

Socialist Workers Party (United States) The Socialist Workers Party is a far-left political organization in the United States. The group places a priority on "solidarity work" to aid strikes and is strongly supportive of Cuba. The SWP publishes The Militant, a weekly newspaper that dates back to 1928, and maintains Pathfinder Press. The Socialist Workers Party traces its origins back to the former Communist League of America (CLA), founded in 1928 by members of the Communist Party USA expelled for supporting Russian Communist leader Leon Trotsky against Joseph Stalin. Concentrated almost exclusively in New York City and Minneapolis, in 1929 the CLA did not have more than 100 adherents.[1] After five years of propaganda work, the CLA remained a tiny organization, with a membership of about 200 and very little influence.[2]

Limestone: Rock Uses, Formation, Composition, Pictures What is Limestone? Limestone is a sedimentary rock composed primarily of calcium carbonate (CaCO3) in the form of the mineral calcite. It most commonly forms in clear, warm, shallow marine waters. It is usually an organic sedimentary rock that forms from the accumulation of shell, coral, algal and fecal debris. It can also be a chemical sedimentary rock formed by the precipitation of calcium carbonate from lake or ocean water. Limestone-Forming Environment - Marine Unfit for Work: The startling rise of disability in America By Chana Joffe-Walt In the past three decades, the number of Americans who are on disability has skyrocketed. The rise has come even as medical advances have allowed many more people to remain on the job, and new laws have banned workplace discrimination against the disabled.

Super Natural Materials Our goal is to create high performance eco resins that optimize the sustainability of our customers' end products while improving performance and cost. We've replaced petroleum based chemicals with biobased renewable feedstocks. We are able to lower our resins' environmental impact from processing by employing bioderived materials sourced as co-products or from the waste stream of other bio-refining processes.

Famous Economists - List & Biographies of World Famous Economists An economist is a person who has studied and is well versed with the policies and practices in the field of economics. Not only are these people well versed with the intricacies of economics but are also the very people who create, propose and even implement certain policies that are designed to better serve they work for. The sectors where they are found generally include the private sector and the public sector or the government sector.

Ronald Coase Ronald Harry Coase (/ˈkoʊz/; 29 December 1910 – 2 September 2013) was a British economist and author. He was the Clifton R. Musser Professor Emeritus of Economics at the University of Chicago Law School. Exponential Economist Meets Finite Physicist [slimstat f='count' w='ip' lf='resource contains economist'] views this month; [slimstat f='count' w='ip' lf='strtotime equals 2011-07-01|interval equals -1'] overall Some while back, I found myself sitting next to an accomplished economics professor at a dinner event. Shortly after pleasantries, I said to him, “economic growth cannot continue indefinitely,” just to see where things would go. It was a lively and informative conversation.

Beyond Super-Elites and Conspicuous Consumption: Real Ecological Sustainability in the Twenty-First Century This "Chapter Eighteen" is part twenty of Truthout's continuing series of excerpts from Gar Alperovitz's "America beyond Capitalism." This is an exclusive Truthout series from political economist and author Gar Alperovitz. We are publishing weekly installments of the new edition of "America Beyond Capitalism," a visionary book first published in 2005, whose time has come. Donate to Truthout and receive a free copy. Pluralist Commonwealth strategies aim to undercut forces that permit unrestrained expansion by building up converging lines of foundational restructuring over time, especially those that reduce key inequality and psychological consumption drivers and develop new community cultural norms.