The High Price of Materialism 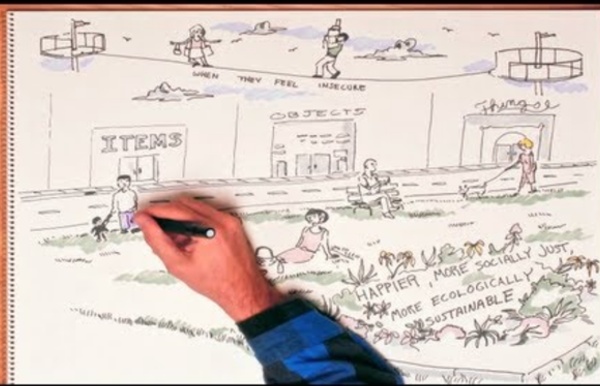 Facebook pays 10-year-old Finnish genius $10,000 for exposing flaw in Instagram Facebook’s Mark Zuckerberg (Josh Edelson/AFP via Getty Images) A hacker in Finland has become the youngest person to receive a reward from Facebook’s Bug Bounty program — but he’ll have to wait three years before he’s old enough to humblebrag about it on the social media platform. Ten-year-old Jani, whose last name isn’t being shared at the request of his parents, uncovered a way to delete any given comment on Instagram, the photo-sharing company that Facebook bought for $1 billion in 2012 — and which Jani, so to speak, pwned. Cymatics: New Music Video for Nigel Stanford Merges Music and Science Experiments With a host of audio-based science experiments from sine waves blasting through streams of water, to visualizations of audio frequencies using sand, and sound waves traveling through flammable gas, this new video by Nigel Stanford has it all. Titled Cymatics, the music video was created for the first single from his new album, Solar Echoes. If you want to learn more about the science, there’s plenty of behind-the-scenes footage with explanation behind each experiment on his Vimeo channel. (via Vimeo Staff Picks)

Collegiality is dead in the new corporatised university The collaborative spirit once embraced by universities in the pursuit of community service is giving way to confidentiality and secrecy as top-down managerialism takes hold, a conference on higher education has heard. In the new, corporatised version of the university, collegiality and consultation are seen as counterproductive, said Professor Margaret Thornton, from the Australian National University College of Law. “Collegiality, a concept inherited from Oxbridge, involves academics making decisions collectively. Imperfect though it might have been … collegiality contrasts sharply with the top-down managerialism associated with the corporatised university. “More insidiously, collegiality is believed to tolerate and even foster dissent; docility is therefore favoured on the part of academics as the new managed class.”

11 of humanity's worst ever inventions Nuclear weapons, reality television and Donald Trump are things that we can probably all agree should never have set foot on planet Earth. But what about some of the more tragic human inventions? The good people over at Reddit decided to compile a list of some of humanity's less-than-stellar inventing moments. Here are some of the best/worst... Please Mind the Gap I am normally wary of statements such as this changes everything. But there is something distinctly attractive about the Occupy Wall Street movement - especially if it is seen as a single thread in a tapestry of increasing social and civic unrest aimed at systematically deconstructing and challenging the more damaging aspects of our civilisational world-system. The ground swell of civil upheaval we are witnessing around the world (admittedly for a variety of differing reasons) seems to offer the potential for a profound global awakening to the human condition that is probably unprecedented in modern times. Before Occupy Wall Street any serious conversation about the negative aspects (misdirected power, corruption and discrimination) locked into the global financial system occurred rarely, and only then at private gatherings of cognoscenti or during off-the-grid brainstorming conclaves within left-leaning think-tanks. 1.

Inventions that changed our world « Chestnut ESL/EFL WORKSHEET: Best Inventions of the past 100 years (SOURCE: eslflow.com) ONLINE ACTIVITY: Inventors: Thomas Edison Watch the video and do online activity (SOURCE: englishexercises.org) In pictures: The household gadgets of yesterday AUDIO TEXTS: Listen to stories about inventors (SOURCE: realworldesl.blogspot.com) VIDEO SOURCE:efllecturer.blogspot.fr Blaming Capitalism for Corporatism - Edmund S. Phelps and Saifedean Ammous Exit from comment view mode. Click to hide this space NEW YORK – The future of capitalism is again a question. Will it survive the ongoing crisis in its current form? If not, will it transform itself or will government take the lead? The term “capitalism” used to mean an economic system in which capital was privately owned and traded; owners of capital got to judge how best to use it, and could draw on the foresight and creative ideas of entrepreneurs and innovative thinkers.

Retired NASA astronaut Scott Kelly comments on 'psychological stress' endured in space A retired NASA astronaut has said the "psychological stress" that results from being in space for a year is as damaging as the radiation he was exposed to each day. Scott Kelly, who returned from the International Space Station in March, has also commented on the possible health issues he faces in the future as a result of the trip. He said: “During my time in orbit, I lost bone mass, my muscles atrophied, and my blood redistributed itself in my body, which strained my heart.” The Fight of the Century As economies contract, a global popular uprising confronts power elites over access to the essentials of human existence. What are the underlying dynamics of the conflict, and how is it likely to play out? 1. Prologue As the world economy crashes against debt and resource limits, more and more countries are responding by attempting to salvage what are actually their most expendable features—corrupt, insolvent banks and bloated militaries—while leaving the majority of their people to languish in “austerity.” The result, predictably, is a global uprising.

How the Clouds Got Their Names By Maria Popova “Clouds are thoughts without words,” the poet Mark Strand wrote in his breathtaking celebration of the skies. And yet clouds are in dynamic dialogue with our thoughts beyond the realm of the poetic — psychologists have demonstrated that cloudy days help us think more clearly. Since our words give shape to our thoughts, it wasn’t until a young amateur meteorologist named and classified the clouds in 1803 that we began to read the skies and glean meaning from their feathery motions. In this animated primer from TED-Ed, Richard Hamblyn, author of The Invention of Clouds: How an Amateur Meteorologist Forged the Language of the Skies (public library) — the same scintillating book that traced how Goethe shaped the destiny of clouds — tells the story of how the clouds got their names, forever changing our understanding of that most inescapable earthly companion, the weather.

This awesome periodic table tells you how to actually use all those elements Thanks to high school, we’ve all got a pretty good idea about what’s on the periodic table. But whether you’re looking at something common like calcium, iron, and carbon, or something more obscure like krypton and antimony, how well do you know their functions? Could you name just one practical application for vanadium or ruthenium? Lucky for us, Keith Enevoldsen from elements.wlonk.com has come up with this awesome periodic table that gives you at least one example for every single element (except for those weird superheavy elements that don’t actually exist in nature). There’s thulium for laser eye surgery, cerium for lighter flints, and krypton for flashlights.

Kitchen gadgets review: Food Sniffer – ‘It smells fishy to me’ What? The Food Sniffer (£105, myfoodsniffer.com): organic chemical sensors housed in a plastic baton. Detects molecular decomposition in meat and fish.