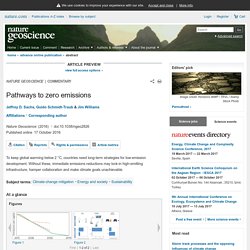 The end of coal-fired growth in China. When will China reach its coal peak? 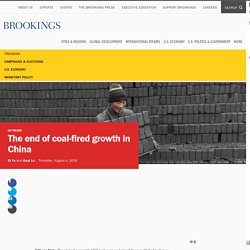 Over the past 35 years, coal powered the engine of China’s rapidly developing economy. Now, China is able to maintain a moderate growth rate while lowering its coal consumption. Get daily updates from Brookings. This GIF Shows How Close We Are To Blowing The World's Carbon Budget. A few years ago Massoud Hassani hit the design blogs with his tumbleweed mine detector, the Mine Kafon. 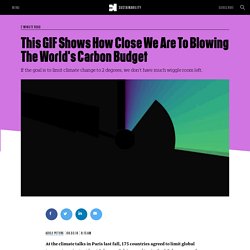 A rolling ball of plastic and bamboo, the Kafon was intended partly as a template and partly as a provocation. Hassani, who grew up in Afghanistan near plenty of land mines, wanted to draw attention to the fact that 100 million mines are still in the ground, killing kids every day. And draw attention he did. The tumbleweed was a hit across the Internet and now resides in the New York MoMa. While that project was (mostly) artistic, Hassani sees more practical potential in his new mine-destroying drone project, which is now funding on Kickstarter. The drone works in three stages. Hassani hopes to cut the cost of de-mining and speed up the process.

Hassani calculates that 40 drones working together could clear a 60-square-mile area in a year, and that a fleet of drones could put a big dent in the 100-million-mine monstrosity in a decade. Have something to say about this article? Anthrax outbreak triggered by climate change sickens dozens in Arctic Circle. A 12-year-old boy in the far north of Russia has died in an outbreak of anthrax that experts believe was triggered when unusually warm weather caused the release of the bacteria. 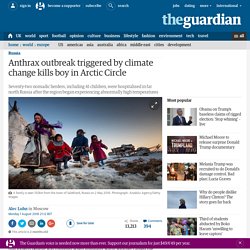 The boy was one of 72 nomadic herders, including 41 children, hospitalised in the town of Salekhard in the Arctic Circle, after reindeer began dying en masse from anthrax. Five adults and two other children have been diagnosed with the disease, which is known as “Siberian plague” in Russian and was last seen in the region in 1941. More than 2,300 reindeer have died, and at least 63 people have been evacuated from a quarantine area around the site of the outbreak. “We literally fought for the life of each person, but the infection showed its cunning,”the Yamal governor, Dmitry Kobylkin, told the Interfax news agency. “It returned after 75 years and took the life of a child.” The tabloid LifeNews reported that the boy’s grandmother died of anthrax at a nomad camp last week. Understanding Uncertainty: How to Improve Communication around Climate Change Evidence – Behavioral Science & Policy Association.