2016 Climate Trends Continue to Break Records. Operation IceBridge, NASA’s airborne survey of changes in polar ice, is closing in on the end of its eighth consecutive Antarctic deployment, and will likely tie its 2012 campaign record for the most research flights carried out during a single Antarctic season. 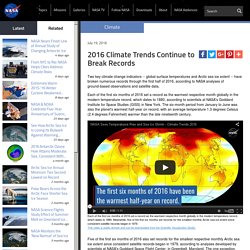 “We are probing the most remote corners of Spaceship Earth to learn more about changes that affect all of us locally, such as how ice sheets are contributing to sea level rise,” said NASA Deputy Administrator Dava Newman on her very first flight over Antarctica with the IceBridge team on Nov. 17. “At NASA we explore: not only space, but also our home planet.” What is El Niño? RegenVillages. An Amsterdam Suburb Wants to Be the Closed-Loop Community of the Future.

The brutal effects of climate change show no sign of relenting anytime soon, and they’re only made more urgent by the continuously expanding global population. 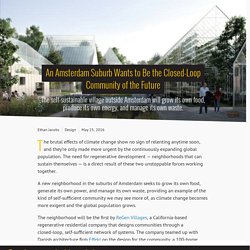 The need for regenerative development — neighborhoods that can sustain themselves — is a direct result of these two unstoppable forces working together. A new neighborhood in the suburbs of Amsterdam seeks to grow its own food, generate its own power, and manage its own waste, providing an example of the kind of self-sufficient community we may see more of, as climate change becomes more exigent and the global population grows. The neighborhood will be the first by ReGen Villages, a California-based regenerative residential company that designs communities through a closed-loop, self-sufficient network of systems.

Mysterious Winds Cause Rapid Melting of Antarctic Ice. A peculiar storm swept across the mountains of the Antarctic Peninsula in February of this year. 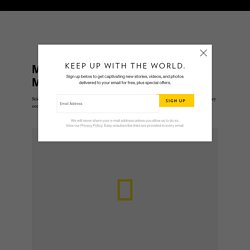 Several scientists hunkered down in their tents as a torrent of horizontal-blowing snow washed through. Erin Pettit found her way through the camp by following a series of red and green canvas flags flapping on bamboo poles. But when she paused and looked up, she saw something strange: a circle of blue sky directly overhead. Effects. Global climate change has already had observable effects on the environment. 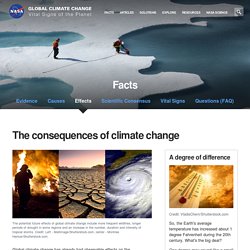 Glaciers have shrunk, ice on rivers and lakes is breaking up earlier, plant and animal ranges have shifted and trees are flowering sooner. Effects that scientists had predicted in the past would result from global climate change are now occurring: loss of sea ice, accelerated sea level rise and longer, more intense heat waves. 11 ways climate change affects the world. Rapid switch to renewable energy can put Paris climate goals within reach. Countries can deliver on the promises of the historic Paris climate change agreement by rapid scaling up wind and solar power to 36% of the global energy mix by 2030, an international energy gathering will be told on Saturday. 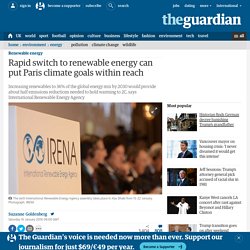 The International Renewable Energy Agency (Irena) meeting in Abu Dhabi – the first major global gathering since Paris – is seen as an important test of countries’ readiness to put those plans into action. Nearly 200 countries agreed to keep warming below 2C, and work towards a 1.5C limit, during the Paris climate negotiations last month. Some 187 put forward plans to cut greenhouse gas emissions. Now comes the hard part, government officials admit: making good on those promises by translating emissions cutting targets into policies, and expanding access to clean energy technologies.

Irena said those goals were within reach – if countries move fast. Africa plans renewable energy drive that could make continent world's cleanest. An Africa-wide mega-scale initiative backed by all African heads of state should see the continent greatly increase its renewable energy over the next 15 years. 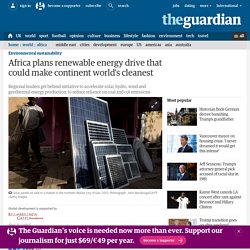 The African Renewable Energy Initiative (Arei) plans to develop at least 10 GW of new renewable energy generation capacity by 2020, and at least 300 GW by 2030, potentially making the continent the cleanest in the world. The International Energy Agency, which has said that Africa is at the “epicentre of the global challenge to overcome energy poverty”, estimates that annual electricity consumption per capita in Africa for 2012 was around 600 kWh, compared with the world average of 3,064 kWh.

Morocco lights the way for Africa on renewable energy. ‘It’s a depressing sight’: climate change unleashes ghostly death on Great Barrier Reef. John Rumney says that just a year ago, this particular spot was once the most stunning coral garden on the entire Great Barrier Reef. 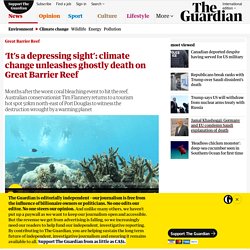 If a film crew said it wanted to get a cliche shot of the reef with its mind-boggling richness of coral and fish species, this was where he took them. Now he’s taking us there to see the destruction wrought by climate change. He says the fact this reef was used in so many films and magazines means it’s a perfect location to see the effects of the recent bleaching event. He tells us he would regularly describe the location as having “more than 100% coral cover”. Former Great Barrier Reef marine park head calls for ban on new coalmines. The former head of the Great Barrier Reef Marine Park Authority has called for a ban on all new coalmines in Australia, saying the move is needed to protect the Great Barrier Reef from climate change. 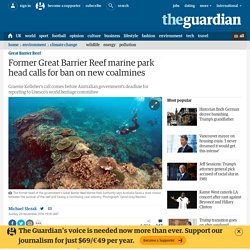 “I love the reef and I have worked to preserve it since 1979; I will oppose anything that threatens to destroy it,” said Graeme Kelleher, who was the first chief executive of GBRMPA, a position he held for 16 years. “The Great Barrier Reef is one of the seven wonders of the world.” Kelleher, who is also a member of the Ocean Elders – a group of global leaders concerned about ocean conservation including Richard Branson, James Cameron, Jane Goodall and EO Wilson – said: “Australia cannot have a healthy Great Barrier Reef and a continuing coal industry.” 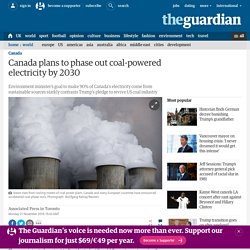 The move is in stark contrast to President-elect Donald Trump’s vow to revive the American coal industry. The environment minister, Kathleen McKenna, said the goal is to make sure 90% of Canada’s electricity comes from sustainable sources by that time – up from 80% today. The announcement is one of a series of measures Justin Trudeau’s Liberal government is rolling out as part of a broader climate change plan. Trudeau also has plans to implement a carbon tax. Trump, in contrast, has also said he would “cancel” the Paris agreement. Trudeau told President Obama this past weekend he would miss working with him because he shared so many values. 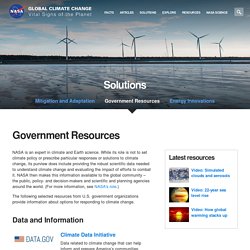 Causes. Most climate scientists agree the main cause of the current global warming trend is human expansion of the "greenhouse effect"1 — warming that results when the atmosphere traps heat radiating from Earth toward space. Certain gases in the atmosphere block heat from escaping. Long-lived gases that remain semi-permanently in the atmosphere and do not respond physically or chemically to changes in temperature are described as "forcing" climate change. Gases, such as water vapor, which respond physically or chemically to changes in temperature are seen as "feedbacks. " Gases that contribute to the greenhouse effect include: Water vapor. On Earth, human activities are changing the natural greenhouse. UK signs up for Paris climate agreement.

Image copyright Getty Images. Drought, floods and water stress cost companies $14bn. Droughts, water scarcity and stricter environmental regulations cost businesses a reported $14bn (£11bn) this year, up from $2.6bn in 2015. Yet companies still aren’t doing enough to protect themselves from water risks, according to a new report. Compiled by environmental non-profit CDP and released Tuesday at the climate summit in Marrakech, Morrocco, the report approached more than 1,200 of the largest listed companies around the world in sectors exposed to water risk. Just over 600 responded, meaning the $14bn figure is likely to be hugely underreported. The businesses, which included consumer goods giant Unilever and oil and gas company Suncor Energy, were measured on a number of factors, such as their efforts to track their water use and goal-setting to save water.

More than a quarter of the companies said water-related issues, including floods and pollution, had affected their bottom line, typically due to higher operating costs and a disruption in production. 2016 'very likely' to be world's warmest year. Image copyright Getty Images 2016 looks poised to be the warmest year on record globally, according to preliminary data. With data from just the first nine months, scientists are 90% certain that 2016 will pass the mark set by 2015. Temperatures from January to September were 1.2C above pre-industrial levels, according to the World Meteorological Organization (WMO).

The body says temperatures should remain high enough for the rest of the year to break the previous record. El Nino has had an impact, but the most significant factor driving temperatures up continues to be CO2 emissions. What is climate change?