Seepage: Climate change denial and its effect on the scientific community. <div class="msgBox" style="margin-top:10px;"><span class="errMsg"><div>JavaScript is disabled on your browser. 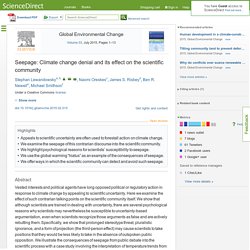 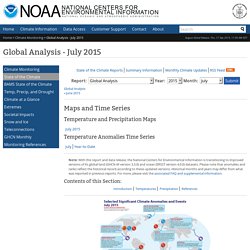 Please note that anomalies and ranks reflect the historical record according to these updated versions. Contents of this Section: Introduction Temperature anomalies and percentiles are shown on the gridded maps below. The most current data may be accessed via the Global Surface Temperature Anomalies page. [ top ] Temperatures In the atmosphere, 500-millibar height pressure anomalies correlate well with temperatures at the Earth's surface. July 2015 and May–July 2015 maps—is generally reflected by areas of positive and negative temperature anomalies at the surface, respectively. July Select national information is highlighted below. 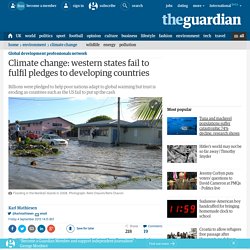 Dozens of NGOs, governments and development agencies were queuing up to put to work a total $10.2bn in promised finance, said GCF executive director Hela Cheikhrouhou. Already 20 organisations have passed through the fund’s accreditation process, meaning they will be able to pitch for funding for projects, such as transitions to solar energy or drought-resistant crops that would help the developing world adapt to climate change or reduce emissions. She said she expected the number of accredited organisations to hit 100 and for the first tranche of projects to be funded before the Paris climate talks in December. “It certainly would erode the confidence because climate finance is one of the most difficult negotiation themes,” she said. The world has noted Australia's lack of ambition on climate change. For an outsider to understand another country’s climate policy is never easy. 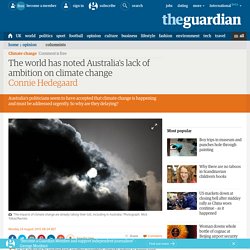 Australia is certainly no exception. As a European observer, the recent debate about climate action in Australia is particularly puzzling. In the early 1990’s Australia was among the reasonably ambitious countries when it came to fighting climate change. Yes, Australia was slow to ratify the Kyoto Protocol – to put it diplomatically. However, in 2007, the then new Australian government announced it would ratify, much to the applause of the international community. Up to the 2009 climate conference in Copenhagen Australia then engaged in a much stronger fashion in the international climate talks. The Australian government has now sent to the UN its bid as to what Australia’s contribution to the joint global effort of addressing climate change will be.

Now here is the puzzling question: why on earth wait until 2017/2018 to be more specific on how Australia should address climate change?