Nations reach climate deal at COP26 after compromise on coal. Government negotiators from nearly 200 countries have adopted a new deal on climate action after a last-minute intervention by India to water down the language on cutting emissions from coal. 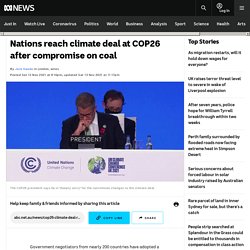 Key points: The UN COP26 climate change conference has accepted a revised deal which is the most ambitious climate pact since Paris 2015The deal aims to keep alive the aim of capping global warming to 1.5 degrees Celsius above pre-industrial levelsThe deal was delayed by India's objections to the wording about coal The agreement, which came more than 24 hours after Friday afternoon's deadline, was sealed by COP26 president Alok Sharma banging down his gavel to signal there were no objections from the 197 nations attending the conference. 'Not all about doom and gloom': Australia urged to adopt health focus in climate policy. "We have nothing to lose from implementing these kinds of policies," Ms Armstrong said on Friday at the online launch event for the report, entitled 'Healthy, Regenerative and Just'. 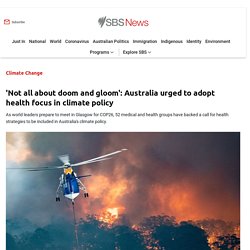 Ms Armstrong said the federal government's updated climate policy on Tuesday did not include a strategy for responding to health impacts arising from climate change, and the impacts on more vulnerable groups such as Indigenous Australians, those with pre-existing medical conditions and socioeconomically disadvantaged individuals. "This report provides a report for the federal government to implement in cooperation with the states and territories to reduce emissions, tackle inequality and improve health through no regrets policies and initiatives," she said.

Climate change: Young people very worried - survey. Australian glossary on health and climate change. Canada is a warning: more and more of the world will soon be too hot for humans. The climate crisis means that summer is a time of increasingly dangerous heat. 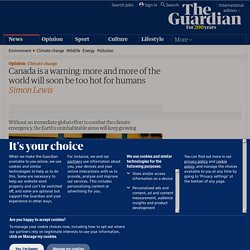 This week in the Pacific north-west, temperature records are not just being broken, they are being obliterated. Temperatures reached a shocking 47.9C in British Columbia, Canada. Hundreds dead as record-breaking heat wave hits Canada and United States. Scores of deaths in Canada's Vancouver area and large wildfires are likely linked to a gruelling heat wave, authorities said Tuesday, as the country recorded its highest-ever temperature amid scorching conditions that extended to the Pacific Northwest region of the United States. 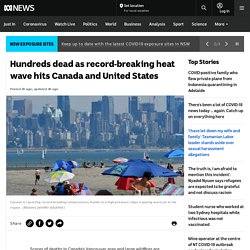 Key points: Record highs of 49.5C are attributed to climate change 233 deaths have been reported between Friday and Monday in British ColumbiaSchools and COVID-19 vaccination centres have been forced to close At least 134 people have died suddenly since Friday in the Vancouver area, according to figures released by the region's city police department and the Royal Canadian Mounted police. The Vancouver Police Department alone said it had responded to more than 65 sudden deaths since Friday, with the vast majority "related to the heat. " The service said in a statement it recorded 233 deaths in the wider British Columbia area between Friday and Monday, compared with 130 on average. 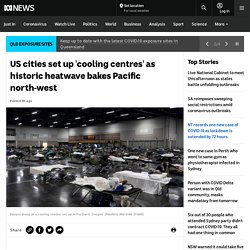 Areas that normally experience mild weather are reaching temperatures in the mid-40s Temperatures have soared due to a high-pressure domeThe US National Weather Service says more unusual weather patterns could become more common amid rising global temperatures Daytime temperatures have been breaking records in places where many residents do not have air conditioning. Shops have sold out of portable air conditioners, fans, water and sports drinks. The 2019 report of the MJA–Lancet Countdown on health and climate change: a turbulent year with mixed progress. The natural environments in which we live play a major role in our health and wellbeing and include the important roles of weather and climate. 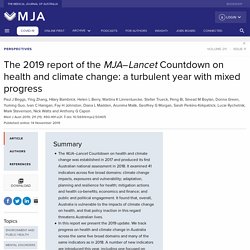 The depth and breadth of this connection with our health in Australia continues to be the subject of new research.1,2,3 Climate change is a leading issue of our times, and Australia is especially sensitive to this change. Indeed, the CSIRO has recently reiterated that climate change and the environment is one of six major challenges facing the nation.4 In September 2019 the Australian Medical Association recognised climate change as a health emergency.5 With the enormity of the threat to health from climate change being well established, the challenge is to embrace the opportunity to reduce or avoid this threat through proactive adaptation and mitigation. 3. 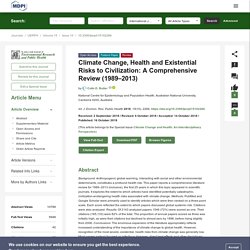 This paper reports a comprehensive literature review for 1989–2013 (inclusive), the first 25 years in which this topic appeared in scientific journals. It explores the extent to which articles have identified potentially catastrophic, civilization-endangering health risks associated with climate change. Special Issue : Climate Health-Being: The Physical, Mental, and Financial Burden of Extreme Weather Events? 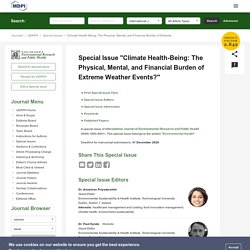 Anushree Priyadarshini. Special Issue : Climate Change Adaption for Public Health. Dear colleagues, Climate change is one of the most dire and rapidly growing threats to public health in the twenty-first century. 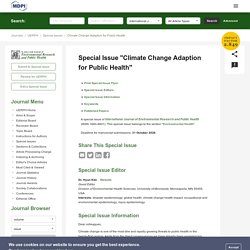 Aside from the direct consequences we have already been experiencing, such as the growing frequency of extreme weather events and outbreaks of vector and water-borne diseases, the slow and indirect impacts that are gradually coming to the fore are also of great concern, particularly in the areas of mental health, chronic noncommunicable diseases, food security, population migration and displacement, and the consequent overburdening of health systems. However, while the national governments that came together at Paris Agreement have identified human health as the top 6th priority sector to improve, in reality, only limited efforts have been allocated to the health sector.

In this Special Issue, we would like to share the best public health adaptation strategies and technologies to minimize climate change impacts to public health. Special Issue : Climate Change Adaptation and Risk Reduction. Dear Colleagues, Climate change is a reality in our modern world, and we have already seen changes in long-term weather patterns, in the integrity of our eco-systems, the occurrence of extreme weather events and resultant flooding and displacement, wildfires, and other climate-related phenomena that affect our lives, health, and well-being. 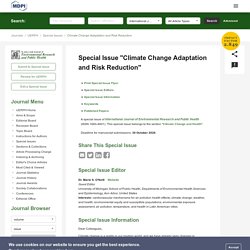 A growing body of literature documents the effects of these changes on human populations and the earth that sustains us, and ways that public health, environmental, planning, and other policies can help us adapt to the “new normal” and adopt more sustainable practices for the benefit of future generations. This Special Issue aims to present contributions on climate change adaptation and risk reduction. Dr. Marie S. The Lancet: Climate change and NCDs. The 21st session of the UN Framework Convention on Climate Change (Nov 30–Dec 11, 2015; Paris, France) marked the 11th meeting of those countries who endorsed the Kyoto Protocol—an agreement that set binding greenhouse gas reduction targets, in an attempt to mitigate the effects of such emissions on climate change.

The Protocol, drawn up in 1997 and officially enforced from 2005, required 37 industrialised nations, plus the European Community, to reduce their greenhouse gas emissions by 2012, to achieve a worldwide decrease of 5·2% compared with concentrations in 1990. Although 192 countries ratified the Protocol (the USA being a notable exception), many countries that were classed as rapidly developing at the time of its drafting—including India and China—were exempt. The need for countries to act on climate change is enshrined in one of the UN's Sustainable Development Goals (SDG 13), which calls on countries “to take urgent action to combat climate change and its impact”.

More than a decade of overwhelming evidence links air pollution and heat exposure with negative pregnancy outcomes in the US, according to a new review of dozens of studies. The investigation, published in the Journal of the American Medical Association, identified 57 studies since 2007 showing a significant association between the two factors and the risk of pre-term birth, low birth weight and stillbirth. Black mothers were particularly at risk, as were people with asthma. Delay is deadly: what Covid-19 tells us about tackling the climate crisis. The coronavirus pandemic has brought urgency to the defining political question of our age: how to distribute risk. As with the climate crisis, neoliberal capitalism is proving particularly ill-suited to this. Like global warming, but in close-up and fast-forward, the Covid-19 outbreak shows how lives are lost or saved depending on a government’s propensity to acknowledge risk, act rapidly to contain it, and share the consequences.

On these matters, competence and ideology overlap. Governments willing to intervene have been more effective at stemming the virus than laissez-faire capitalists. The further right the government, the more inclined it is to delay action and offload blame elsewhere. WHO CED PHE EPE 19.11 eng. Strengthen health systems. What WHO is doing for climate and health. Climate change and health. Climate change - the biggest health threat facing humanity Climate change is the single biggest health threat facing humanity, and health professionals worldwide are already responding to the health harms caused by this unfolding crisis. The Intergovernmental Panel on Climate Change (IPCC) has concluded that to avert catastrophic health impacts and prevent millions of climate change-related deaths, the world must limit temperature rise to 1.5°C. Past emissions have already made a certain level of global temperature rise and other changes to the climate inevitable.

Global heating of even 1.5°C is not considered safe, however; every additional tenth of a degree of warming will take a serious toll on people’s lives and health. The climate crisis threatens to undo the last fifty years of progress in development, global health, and poverty reduction, and to further widen existing health inequalities between and within populations. Health and climate change. See how climate change has impacted the world since your childhood. Climate Change and Human Well-Being. Although climate change is mainly caused in industrialized nations, the impact of climate change has spread across the globe, among developing countries and the world’s most vulnerable populations.

While the public health effects of environmental degradation and the resulting natural disasters are well-known, less is understood about their mental health impact and psychosocial well-being, and what types of interventions may best minimize the damage. Climate Change and Human Well-Being identifies the psychological responses and mental health impacts that accompany gradual environmental change and extreme weather events, and explains how climate change exacerbates existing inequities.

Painstakingly researched, with extensive worldwide findings and instructive examples from the experiences of those affected by climate-change, this groundbreaking volume also examines the potential for collaboration among diverse sectors of society in responding to environmental crisis. Environment and Climate Change Archives - Public Health Notes. At least 40 killed in monsoon rains in South Asia. Programme - WorldConference.

Pursuit by The University of Melbourne.