Weather and latitude. Miami Rick ✈️□□ sur Twitter : "I know you guys enjoy the #BehindTheScenes stuff, so here’s one.. Had an issue with a pitot/static sensor, and the Dispatch Deviation Guide says it’s a ‘Go’ -unless- there’s visible moisture. Fixing to #fly across the ITCZ i. Box floating on Sulphur Hexafloride because it’s denser then air and invisible. The jet stream awakens this week : Faster transatlantic flights from the USA to UK, but more turbulent weather for us. We remain on the col… #WFSyear10 #WFSyear11 - modelling the Global Circulation with balloons @RMetS @WFS_Science #geography #GeographyTeacher… Climate Reanalyzer. The weather maps shown here are generated from the NCEP Global Forecast System (GFS) model. 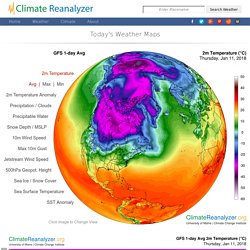 Is it us or does the sky and snow at Stelvio pass, N Italy (2757 m) look yellowish? Light or Saharan dust? Large quantities of Saharan dust… ❄️□ It might already feel like it in some parts of the country, but could an ice age happen again? #Year2017 in 30 seconds. Based on #VIIRS / @NASANPP images via #NASAWorldview. #newyear #happynewyear Hi-res □

Global Atmospheric Circulation. In @NASA models of aerosols — tiny particles carried in the atmosphere – we can see big and small weather phenomena painted in the colors of… @NASAGoddard Hurricane Ophelia was the easternmost Atlantic hurricane on record. Unusually, this hurricane didn’t wash out the dust but carried it, and s… Dust, shown here in brown, from the Sahara Desert travels across the Atlantic Ocean, where it fertilizes the Amazon rainforest and phytoplan… I can never get enough of Von Karman Vortices. Check these out downwind of the Cape Verde Islands today !! #satellite #MODIS. Stunning yet frightening view of Southern California fires today. Smoke is wrapping up in a downwind eddy. The odds of this happening must be one in a trillion.

GMS: 2017 Hurricanes and Aerosols Simulation. Those rubber duckies lost at sea in 1992 are still washing ashore today - giving important scientific evidence about #ourocean currents and… Y10 Geographers found atmospheric circulation so much easier to understand with @GeoNewbz pop up model. Where in the world have currents taken the ducks featured in #BluePlanet2? #OurBluePlanet. Meanwhile, NHC outlooked area (20%) in SW Caribbean is going to be a soaker hose for these parts over next few days incl. PR with low probab…

Standing wave cloud providing quite the cloud cover for the Colorado Front Range today. Pretty one minute imagery of Lake Ontario producing lake effect clouds this afternoon. *****A rather cool demonstration of a katabatic flow creating an impressive fog waterfall (cliffs of Látrabjarg in Iceland, 2015)… Lake-effect machine is in full swing over @LakeSuperior after a cold front passed through this morning. What a beautiful video to wake up to this #Sunday! Low clouds over #Colorado made the sky look like an ocean Friday. Gravity waves, lake effect, boundaries, even a swirl or two - the atmosphere was spectacular yesterday over Lake Superior. Our scientists investigated the global impact of atmospheric rivers on precipitation, floods and snowpack on land.

Made these step by step instructions to produce a GAC model on a paper plate #geographyteacher yes my diagrams were made using MS and paint□ Challenging my year 7s to think deeper #geographyteacher. Developing a step by step ‘pop-up’ of the Global Circulation System. #geographyteacher□☀️□☃️ An atmospheric river just spanned the entire Pacific. See it in action: 13 GB of data -> 4 MB gif #dataviz #maps. This reminder: The atmosphere is a fluid. It flows. *****An giant undersea waterfall?! Don't miss our #OceanFactFriday post.

Seeing global winds - Ocean Navigator - March/April 2014. Feb 28, 2014 by tim queeney The “earth” website by Cameron Beccario is an intriguing way to get a feel for global wind circulation. 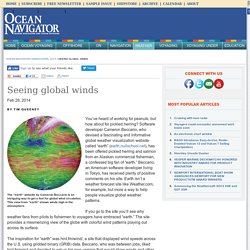 This view from “earth” shows winds high in the atmosphere. You’ve heard of working for peanuts, but how about for pickled herring? Software developer Cameron Beccario, who devised a fascinating and informative global weather visualization website called “earth” (earth.nullschool.net), has been offered pickled herring and salmon from an Alaskan commercial fisherman, a confessed big fan of “earth.” If you go to the site you’ll see why weather fans from pilots to fishermen to voyagers have embraced “earth.”

Closer to home, impressive front stretching from the eastern US coast to northern Germany, powered by a strong Atlantic jetstream. #History lesson: Benjamin Franklin was a cool dude and polymath. In 1768 he drew this #map of the Gulf Stream. #CLIMATE #p2 RT Wildfire smoke crosses U.S. on the jet stream #tlot #ccot. *****1823 map showing influence of Gulf Stream: may have found patient zero for rainbow□ palette dataViz. William Woodbridge, 1823. Guilty.

Here the waters of the Pacific and the Atlantic meet. *****Animated map: The movement of aerosols in the atmosphere red = dust blue = sea salt green = carbon white = sulfates. Radioactive 'pooh sticks' trace carbon's ocean journey. Image copyright Getty Images Radioactive iodine from nuclear reprocessing plants in the UK and France has been detected deep in the waters near Bermuda. 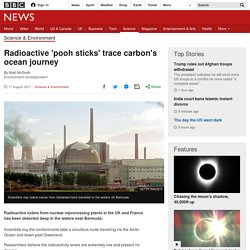 Scientists say the contaminants take a circuitous route travelling via the Arctic Ocean and down past Greenland. Researchers believe the radioactivity levels are extremely low and present no danger. However, scientists can use the iodine to accurately map the currents that transport greenhouse gases. One scientific consequence that arose from the testing of nuclear bombs in the atmosphere in the 1950s was that their radioactive fallout provided a powerful global tracer of water circulation and deep-ocean ventilation.

Other sources of radioactive material for scientists to track water movements have been the nuclear reprocessing plants at Sellafield in the UK and at La Hague in France. Contaminants have been legally released from these sites for more than 50 years. *****Gulf Stream / Thermohaline conveyor: Climate Change & the Global Conveyor Belt. *****Air moves in mysterious ways. Spiraling clouds over islands are caused by “von Kármán vortices” that arise when winds are diverted around islands. I am always amazed at the intricacies in the Earth system. Sea ice caught in an eddy west of Baffin Island, (Nunavut) Canada [Sentinel-2] Two Views of Von Kármán Vortices : Image of the Day. *****Thermohaline circulation: Global Ocean Circulation Appears To Be Collapsing Due To A Warming Planet. 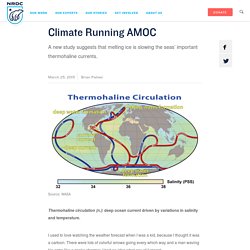 I used to love watching the weather forecast when I was a kid, because I thought it was a cartoon. There were lots of colorful arrows going every which way and a man waving his arms like a snake charmer. I had no idea what any of it meant. Suddenly, I know more than I ever wanted to. A major study released in the journal Nature Climate Change warned that those arrows, and the ocean currents they represent, might be changing rapidly—with the potential to alter regional climates faster than anyone expected.

A great photo taken by @Shantelle_JJR from La Gomera, looking at #Tenerife where the Saharan dust was obscuring last nights view. Supercomputer simulations (like this one) help scientists study the behavior of ocean currents. Discover how. *****In Case You Missed it: The Tropics Are Coming, The Tropics Are Coming! : Earth Matters : Blogs. Earth, from the top of the stratosphere to the depth of the oceans. *****State of the Ocean SOTO. *****When different color oceans meet to create an 'edge' *****von Kármán vortices (Coriolis) at Guadalupe & coastal eddy off Baja California captured by #GOES16 on June 21, 2017.

Animated #map by @NASA shows global #cloud cover over the course of a year. #climate #meteorology. NASA research estimates how much and how quickly our ocean absorbs greenhouse gases and warming. The movement of aerosols in the atmosphere red = dust blue = sea salt green = carbon white = sulfates. *****Sea breeze: from cool to warm #RobertAyton. Ocean currents… (‘Perpetual Ocean’ by NASA) *****Fohn winds / Foen winds:Antarctica's troublesome 'hairdryer winds' Image copyright BAS It's an ill wind that blows no good - at least not for the ice shelves on the eastern side of the Antarctic Peninsula. 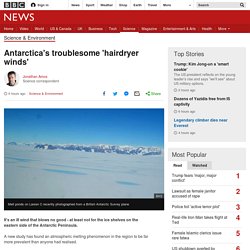 A new study has found an atmospheric melting phenomenon in the region to be far more prevalent than anyone had realised. Deck.gl Blog. A few weeks ago I set on trying out new WebGL 2.0 features with deck.gl. 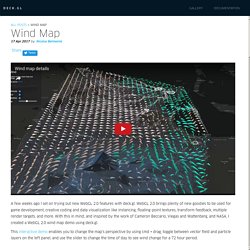 WebGL 2.0 brings plenty of new goodies to be used for game development, creative coding and data visualization like instancing, floating-point textures, transform feedback, multiple render targets, and more. With this in mind, and inspired by the work of Cameron Beccario, Viegas and Wattenberg, and NASA, I created a WebGL 2.0 wind map demo using deck.gl. This interactive demo enables you to change the map’s perspective by using cmd + drag; toggle between vector field and particle layers on the left panel, and use the slider to change the time of day to see wind change for a 72 hour period. Some interesting insights. □ This stunning #satellite image shows dust that has spread from W Africa to the two closest islands (Fuerteventura and Lanzarote) □ *****Atmospheric pressure: The fascinating and terrible things that would happen to you if you tried to fly on Jupiter — and other planets.

Saharan dust causing hazy conditions. Reports of haziness over the weekend are the result of high winds which carry over mineral dust from the Saharan Desert, bringing with it hazy visibility and for some, respiratory problems. 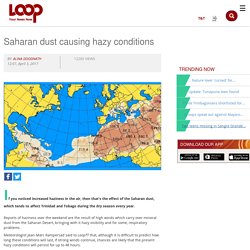 Meteorologist Jean-Marc Rampersad said to LoopTT that, although it is difficult to predict how long these conditions will last, if strong winds continue, chances are likely that the present hazy conditions will persist for up to 48 hours. He added that the strength and duration of hazy conditions depends on factors such as wind surge and wind direction over the Atlantic Ocean, which channels dust from the Sahara Desert on the African continent over to the Caribbean and parts of South America. The added dustiness may irritate those prone to respiratory conditions such as sinusitis or asthma. A forecast from the University of Athens showed the Trinidad and Tobago and parts of the Caribbean being affected by Saharan Dust, with a reported dust concentration of between one and 10 cubic metres.

*****Coriolis Force: Water vapour satellite imagery □️ is essential in forecasting how #cloud and #rain develops, and sometimes it can look absolutely amazing! □Here is a stunning satellite image from yesterday of a low pressure system, but can you guess #WhereOnEarthIsThis? □ The effect of differential heating of the land and ocean - western coast of the Yucatan Peninsula, from 30000 ft. Amazing tropical storm project by Mrs Smith's year 10s! @BrightonHillSch #geographyteacher #creativity. The double-headed cloud structure of #StormDoris is a classic sign of a rapidly deepening depression. Watching a bubble freeze ❄️