Feature: The new shape of fusion. ITER, the international fusion reactor being built in France, will stand 10 stories tall, weigh three times as much as the Eiffel Tower, and cost its seven international partners $18 billion or more. 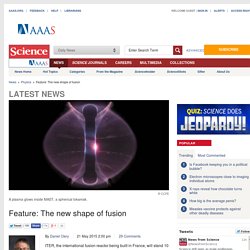 The result of decades of planning, ITER will not produce fusion energy until 2027 at the earliest. And it will be decades before an ITER-like plant pumps electricity into the grid. Oil Companies Look to Join Climate Debate. By Bill Spindle And Francis X. 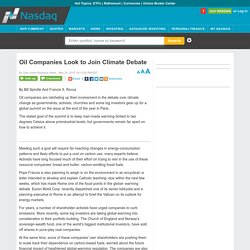 Rocca Oil companies are ratcheting up their involvement in the debate over climate change as governments, activists, churches and some big investors gear up for a global summit on the issue at the end of the year in Paris. The stated goal of the summit is to keep man-made warming limited to two degrees Celsius above preindustrial levels, but governments remain far apart on how to achieve it. Meeting such a goal will require far-reaching changes in energy-consumption patterns and likely efforts to put a cost on carbon use, many experts believe. Activists have long focused much of their effort on trying to rein in the use of these resource companies' bread and butter: carbon-emitting fossil fuels. Home — Fact Sheet fs002-00: Sea Level and Climate. 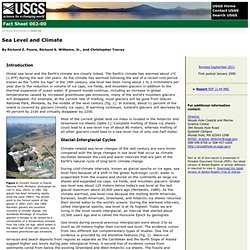 The Earth’s climate has warmed about 1°C (1.8°F) during the last 100 years. As the climate has warmed following the end of a recent cold period known as the “Little Ice Age” in the 19th century, sea level has been rising about 1 to 2 millimeters per year due to the reduction in volume of ice caps, ice fields, and mountain glaciers in addition to the thermal expansion of ocean water. If present trends continue, including an increase in global temperatures caused by increased greenhouse-gas emissions, many of the world’s mountain glaciers will disappear. For example, at the current rate of melting, most glaciers will be gone from Glacier National Park, Montana, by the middle of the next century (fig. 1).

Figure 1. Most of the current global land ice mass is located in the Antarctic and Greenland ice sheets (table 1). Europe must tackle air pollution, warn UN scientists. The health effects of air pollution have been underestimated and Europe should review its laws to tackle the problem, UN scientists have concluded after a major review of new evidence. 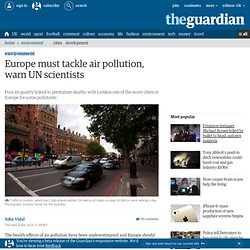 Sixty international scientists, commissioned by the World Health Organisation, analysed eight years of studies to see how minute specks of soot, gases such as ozone and nitrogen dioxide (NO2), and other pollutants from road and rail traffic, industry and indoor fires harm human health. In addition to premature deaths from respiratory and heart diseases, they found links to new conditions such as diabetes and still births and adverse effects on the cognitive development of children born to mothers exposed to even small levels of air pollution. Studies on NO2, said the report, produced new evidence of long-term effects, "including harm to health at levels below existing EU limit values. "Air pollution causes 29,000 early deaths a year in the UK – more than obesity and alcohol combined. 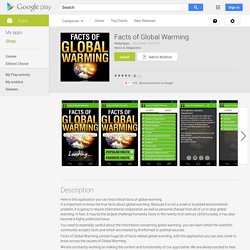 Are you looking for alternative to Hyperlapse from Instagram? Grab this Hyper Timelapse app now!!! It’s really easy to create amazing time lapse of your captured videos with this amazingly simple timelapse video editor app. It's really easy to use, and has a beautiful interface. Just push record button to record the video, and then speed it up using customizable frame rate upto 8x as per your preference. Some classic subjects of time lapse photography include: cloudscapes and celestial motion, plants growing and flowers opening, fruit rotting, evolution of a construction project and people in the city. Hyper Timelapse App Features: Portal:Global warming. 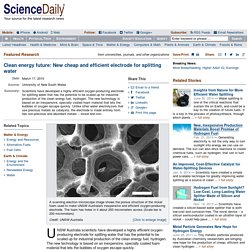 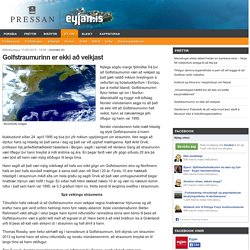