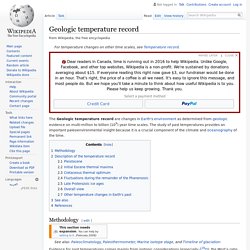 We will send you a reminder email. Dear readers in Canada, time is running out in 2016 to help Wikipedia. Unlike Google, Facebook, and other top websites, Wikipedia is a non-profit. We're sustained by donations averaging about $15. Methodology[edit] Evidence for past temperatures comes mainly from isotopic considerations (especially δ18O); the Mg/Ca ratio of foram tests, and alkenones, are also useful. 8.2 kiloyear event. Central Greenland reconstructed temperature: older dates to right. 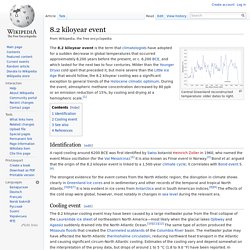 The 8.2 kiloyear event is the term that climatologists have adopted for a sudden decrease in global temperatures that occurred approximately 8,200 years before the present, or c. 6,200 BCE, and which lasted for the next two to four centuries. Milder than the Younger Dryas cold spell that preceded it, but more severe than the Little Ice Age that would follow, the 8.2 kiloyear cooling was a significant exception to general trends of the Holocene climatic optimum. During the event, atmospheric methane concentration decreased by 80 ppb or an emission reduction of 15%, by cooling and drying at a hemispheric scale.[1] Identification[edit] Cooling event[edit] Drier conditions were notable in North Africa, while East Africa suffered five centuries of general drought.

The initial meltwater pulse caused between 0.5 and 4 m (1 ft 8 in and 13 ft 1 in) of sea-level rise. 5.9 kiloyear event. The 5.9 kiloyear event was one of the most intense aridification events during the Holocene Epoch. 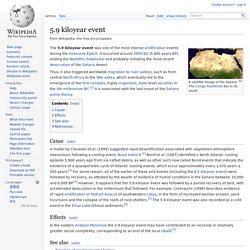 It occurred around 3900 BC (5,900 years BP), ending the Neolithic Subpluvial and probably initiating the most recent desiccation of the Sahara desert. 4.2 kiloyear event. The 4.2 kiloyear BP aridification event was one of the most severe climatic events of the Holocene period in terms of impact on cultural upheaval.[1] Starting in ≈2200 BC, it probably lasted the entire 22nd century BC. 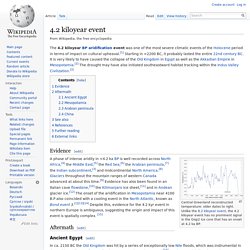 It is very likely to have caused the collapse of the Old Kingdom in Egypt as well as the Akkadian Empire in Mesopotamia.[2] The drought may have also initiated southeastward habitat tracking within the Indus Valley Civilization.[3] Evidence[edit] Central Greenland reconstructed temperature: older dates to right. Unlike the 8.2 kiloyear event, the 4.2 kiloyear event has no prominent signal in the Gisp2 ice core that has an onset at 4.2 ka BP. Aftermath[edit] Ancient Egypt[edit] Sahara pump theory. Carvings of fauna common in the Sahara during the wet phase, found at Tassili in the central Sahara Mechanism[edit] During periods of a wet or "Green Sahara", the Sahara and Arabia become a savanna grassland and African flora and fauna become common.[4][unreliable source?] 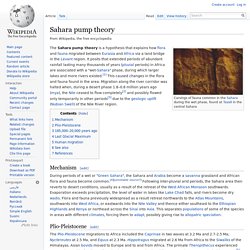 Following inter-pluvial arid periods, the Sahara area then reverts to desert conditions, usually as a result of the retreat of the West African Monsoon southwards. Evaporation exceeds precipitation, the level of water in lakes like Lake Chad falls, and rivers become dry wadis. Flora and fauna previously widespread as a result retreat northwards to the Atlas Mountains, southwards into West Africa, or eastwards into the Nile Valley and thence either southeast to the Ethiopian Highlands and Kenya or northeast across the Sinai into Asia. Plio-Pleistocene[edit] 185,000–20,000 years ago[edit] The Red Sea coastal route was extremely arid before 140 and after 115 kya. Last Glacial Maximum[edit] Human migration[edit]

The world has a third pole – and it's melting quickly. Many moons ago in Tibet, the Second Buddha transformed a fierce nyen (a malevolent mountain demon) into a neri (the holiest protective warrior god) called Khawa Karpo, who took up residence in the sacred mountain bearing his name. 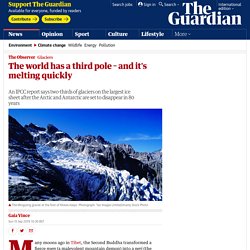 Khawa Karpo is the tallest of the Meili mountain range, piercing the sky at 6,740 metres (22,112ft) above sea level. Local Tibetan communities believe that conquering Khawa Karpo is an act of sacrilege and would cause the deity to abandon his mountain home. Nevertheless, there have been several failed attempts by outsiders – the best known by an international team of 17, all of whom died in an avalanche during their ascent on 3 January 1991. After much local petitioning, in 2001 Beijing passed a law banning mountaineering there.

However, Khawa Karpo continues to be affronted more insidiously. Khawa Karpo lies at the world’s “third pole”. Whether we are Buddhists or not, our lives affect, and are affected by, these tropical glaciers that span eight countries.