Department of the Environment and Energy. Australia is taking a strong, credible and responsible commitment to the Paris climate change conference. 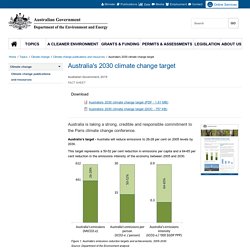 Australia’s target - Australia will reduce emissions to 26-28 per cent on 2005 levels by 2030. This target represents a 50-52 per cent reduction in emissions per capita and a 64-65 per cent reduction in the emissions intensity of the economy between 2005 and 2030. Figure 1. Australia’s emissions reduction targets and achievements, 2005-2030. National climate resilience and adaptation strategy. Climate change strategy2009. Bangladesh rated world's most vulnerable country to climate change. A third of global economic output worth $44 trillion is likely to face ‘high’ or ‘extreme’ risk as a result of global warming Bangladesh is set to suffer more from climate change by 2025 than any other country, warns a new report by risk analysts Maplecroft. 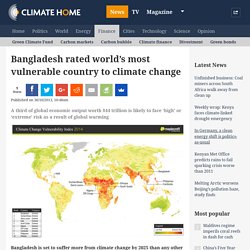 It says rising sea levels, severe storms and other extreme climate-related events will also threaten the future of the country’s capital Dhaka, along with Mumbai, Manila, Kolkata and Bangkok. Maplecroft’s 2013 Climate Change and Environmental Risk Atlas reveals that 31% of global economic output worth $44 trillion is likely to face ‘high’ or ‘extreme’ risk as a result of global warming. Adapting to a Changing Climate - Melbourne's Story. Technology and wellbeing - Destination Innovation. 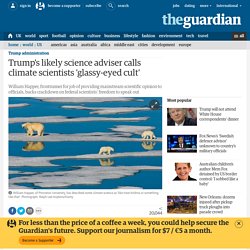 William Happer, an eminent physicist at Princeton University, met Trump last month to discuss the post and says that if he were offered the job he would take it. Happer is highly regarded in the academic community, but many would view his appointment as a further blow to the prospects of concerted international action on climate change. “There’s a whole area of climate so-called science that is really more like a cult,” Happer told the Guardian. “It’s like Hare Krishna or something like that. They’re glassy-eyed and they chant. Trump has previously described global warming as “very expensive … bullshit” and has signalled a continued hardline stance since taking power. “Every national academy of science agrees that the science is solid, that climate change is real,” he said. m2pdfc3. The Carbon Cycle 3D Animation. Fossil fuel firms are still bankrolling climate denial lobby groups. The oil giant BP has announced that they will no longer fund the American Legislative Exchange Council (Alec), a lobbying group that routinely misrepresents climate science to US state legislators. 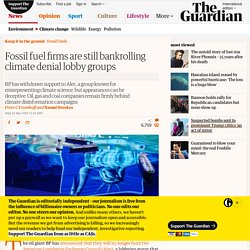 It is the latest sign that some of the world’s largest fossil fuel companies appear to be warming to the overwhelming evidence that the unabated use of their products poses severe risks of disrupting the climate. Last month, BP and Royal Dutch Shell announced their support for shareholder resolutions calling on them to commit to reduce heat-trapping emissions, invest in renewable energy, and show how their current business model would hold up against the strict limits on future emissions needed to limit the risk of major climate disruption. Giant iceberg poised to break off from Antarctic shelf.

A giant iceberg, with an area equivalent to Trinidad and Tobago, is poised to break off from the Antarctic shelf. 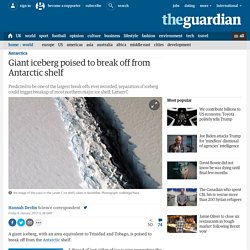 A thread of just 20km of ice is now preventing the 5,000 sq km mass from floating away, following the sudden expansion last month of a rift that has been steadily growing for more than a decade. The iceberg, which is positioned on the most northern major ice shelf in Antarctica, known as Larsen C, is predicted to be one of the largest 10 break-offs ever recorded. Professor Adrian Luckman, a scientist at Swansea University and leader of the UK’s Midas project, said in a statement: “After a few months of steady, incremental advance since the last event, the rift grew suddenly by a further 18km during the second half of December 2016.

Only a final 20km of ice now connects an iceberg one quarter the size of Wales to its parent ice shelf.” “If it doesn’t go in the next few months, I’ll be amazed,” Luckman told BBC News. Understanding the Link Between Climate Change and Extreme Weather. On This Page: Changes in Extreme Weather and Climate Events Scientists study many aspects of change in extreme weather and climate events. 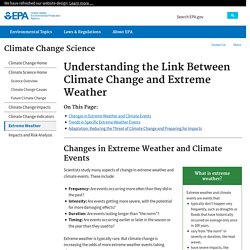 These include: Frequency: Are events occurring more often than they did in the past? Intensity: Are events getting more severe, with the potential for more damaging effects? Five-year global temperature anomalies from 1880 to 2015. Global Ice Viewer. Global Ice Viewer. Sea Change. Evidence. Antarctica’s Larsen B Ice Shelf: The Final Act. CO2 sinks - Oceans. Carbon dioxide readily dissolves in water and the oceans provide a huge reservoir of carbon. 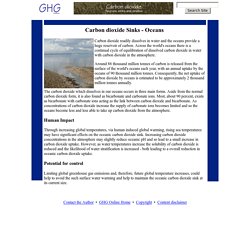 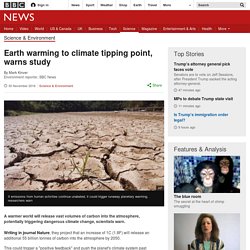 Writing in journal Nature, they project that an increase of 1C (1.8F) will release an additional 55 billion tonnes of carbon into the atmosphere by 2050. This could trigger a "positive feedback" and push the planet's climate system past the point of no-return. Previous assessments have not taken carbon released by soil into account. In their Nature paper, an international team of scientists said that the majority of the Earth's terrestrial store of carbon was in the soil.

Login. 'It was too hot, even to leave home': stories from the world's hottest year. Nigeria In the displacement camps of north-east Nigeria, most residents have the same answer for why 2.6 million people have been forced from their homes in this region. 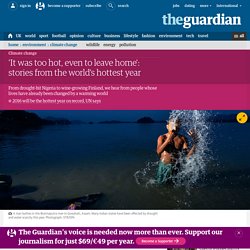 They are running from Boko Haram, the jihadist militants who still control significant parts of the Lake Chad basin. But ask about how Boko Haram gained momentum in the first place, and a more complex narrative emerges. The extremists capitalised on high levels of local poverty, alienation and unemployment in north-east Nigeria. What is climate change? BBC News looks at what we know and don't know about the Earth's changing climate. 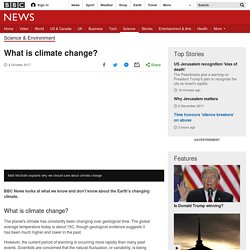 What is climate change? The planet's climate has constantly been changing over geological time. The global average temperature today is about 15C, though geological evidence suggests it has been much higher and lower in the past. However, the current period of warming is occurring more rapidly than many past events. 2016 'very likely' to be world's warmest year. Image copyright Getty Images 2016 looks poised to be the warmest year on record globally, according to preliminary data. With data from just the first nine months, scientists are 90% certain that 2016 will pass the mark set by 2015. Temperatures from January to September were 1.2C above pre-industrial levels, according to the World Meteorological Organization (WMO). The body says temperatures should remain high enough for the rest of the year to break the previous record.

El Nino has had an impact, but the most significant factor driving temperatures up continues to be CO2 emissions. 2016 locked into being hottest year on record, Nasa says. Nasa has all but declared this year to be the hottest yet recorded, after September narrowly turned out the warmest in modern temperature monitoring. Last month was 0.91C above the average temperature for that time of year from 1951 to 1980, the benchmark used for measuring rises. The new findings follow record-breaking monthly anomalies throughout this year, leading the agency to believe that because of the highs reported so far, 2016 will take the crown as warmest in the 136 years of modern data-keeping.

Dr Gavin Schmidt, director of Nasa’s Goddard Institute for Space Studies, tweeted: Last month was only just over the previous record, coming in at a razor-thin 0.004C above the previous high for the time of year, reached in September 2014. That tiny margin may be revised in future, as monthly temperature data can be nudged up or down retrospectively as later reports come in. Ethiopia May Paradoxically Benefit From Climate Change. Suffering from corruption, poor sanitation, malnutrition, and enormous economic inequality, Ethiopia is a troubled nation to say the least.

However, a new study reveals that it may be getting a welcome boost from a most unlikely source – climate change. Writing in the journal Climatic Change, a team from Virginia Tech (VT) has concluded that the flow of water to the Ethiopian Blue Nile Basin (BNB) will likely increase as the world inexorably warms. This will allow crops to be grown throughout multiple seasons of the year, potentially rescuing its faltering agricultural sector.

“For all the catastrophic impacts of climate change, there are some silver linings,” coordinating researcher Zach Easton, an associate professor of biological systems engineering at VT, said in a statement. Mapping the Impacts of Climate Change. Young People's Trust For the Environment. Many, many species of plants and animals are likely to be affected by climate change. Let’s pick out a few examples: Polar Bears – These wonderful animals need ice to live on; it is their habitat and they are specifically adapted to hunting and breeding on and around it. Seals need ice flows too – to rest and give birth to their pups. If the ice flows continue to melt as quickly as they are, the seals and polar bears will die out as their habitat disappears. Global Warming Simulation, Global Warming Interactive, Climate Change Interactive.

Global Warming Effects Map - Effects of Global Warming. Climate change explained in six graphics. Slow-motion wrecks: how thawing permafrost is destroying Arctic cities. At first, Yury Scherbakov thought the cracks appearing in a wall he had installed in his two-room flat were caused by shoddy workmanship. But then other walls started cracking, and then the floor started to incline. “We sat on the couch and could feel it tilt,” says his wife, Nadezhda, as they carry furniture out of the flat. Hurricane Sandy-level flooding is rising so sharply that it could become normal. UK must focus on carbon removal to meet Paris goals, climate advisers urge. Climate change: global deal reached to limit use of hydrofluorocarbons.

A worldwide deal has been reached to limit the use of greenhouse gases far more powerful than carbon dioxide in a major effort to fight climate change. Global sea levels are rising fast, so where does that leave the cities most at risk? The Ghanaian villages destroyed by climate change – in pictures. Unnatural Climates. Nasa: Earth is warming at a pace 'unprecedented in 1,000 years'

Climate Time Machine. A global audience joins Prof Michael Sandel to discuss the world's response to climate change. Alaskan village votes on whether to relocate because of climate change. See Before-and-After Photos of the Changing Environment. Side-by-side comparisons reveal just how much glaciers, lakes, and snowpacks have been altered by nature and humans.

From the ice sheets of Greenland to the deserts of Arizona, many of the world’s landscapes have been dramatically transformed as their climate grows warmer and drier. At the same time, water use and other human activities have altered many landscapes. NASA has accumulated striking photos that show just how much our surroundings have changed. Slide across each image to see before and after pictures. Professor Brian Cox clashes with Australian climate sceptic. Melting Arctic enables new tourist routes. Scotland's rare mountain plants disappearing as climate warms, botanists find. World's hottest month shows challenges global warming will bring. Climate scientists make a bold prediction about sea level rise. Early Human Evolution: Climate Change and Human Evoluti. Decline of fishing in Lake Tanganyika 'due to warming'