Star Size Comparison 2. Earth Wasn’t Always the Solar System’s Only Habitable Planet. On the day that I was born—winter solstice, 1959—a headline in Life magazine proclaimed “Target Venus: There May be Life There!” 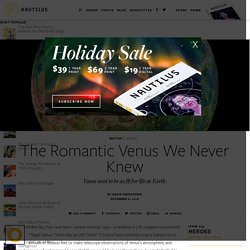 It told of how scientists rode a balloon to an altitude of 80,000 feet to make telescope observations of Venus’s atmosphere, and how their discovery of water raised hopes that there could be living things there. As a kid I thrilled to tales of undersea adventure with telepathic Venusian frogs in Isaac Asimov’s juvenile science-fiction novel Lucky Starr and the Oceans of Venus.

In 1975, when I was 15, a family friend—a planetary scientist—gave me a picture of the first-ever photograph taken from the surface of another planet: Venus. The Soviet Venera 9 probe had sent back a black-and-white image of a landscape with angular rocks and fine-grained dirt. Long-term hydrocarbon trade options for Maghreb core region and Europe - Renewable Energy based synthetic fuels for a net zero emissions world. Preprint to be published in the proceedings of the SGEM Vienna Green 2016 Sessions, November 2-5, Vienna, Austria electrified in future, thus the market size for hydrocarbons would shrink to mainly aviation, heavy vehicles, and non-energetic industrial applications. 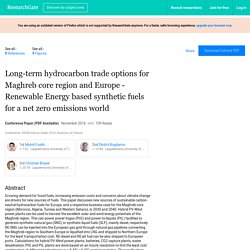 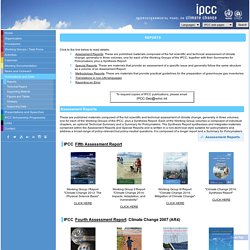 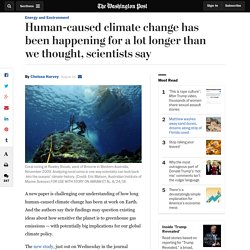 Analyzing coral cores is one way scientists can look back into the oceans’ climate history. (Credit: Eric Matson, Australian Institute of Marine Science) FOR USE WITH STORY ON ABRAM ET AL. 8/24/16 A new paper is challenging our understanding of how long human-caused climate change has been at work on Earth. And the authors say their findings may question existing ideas about how sensitive the planet is to greenhouse gas emissions — with potentially big implications for our global climate policy. What can a technologist do about climate change? A personal view. Say we allocate $3.0 billion for the following program: Car-owners who trade in an old car that gets less than 17 MPG, and purchase a new car that gets better than 24 MPG, will receive a $3,500 rebate. 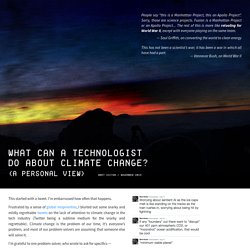 We estimate that this will get 828,571 old cars off the road. It will save 1,068 million gallons of gas (or 68 hours worth of U.S. gas consumption.) It will avoid 9.97 million tons CO2e, or 0.14% of annual U.S. greenhouse gas emissions. The abatement cost is $301 per ton CO2e of federal spending, although it’s -$20 per ton CO2e on balance if you account for the money saved by consumers buying less gas.

This passage gives some estimates of what the proposal would actually do. Das Märchen vom grünen Wachstum – warum der Markt das Klima nicht retten wird (1) A New Geopolitics of EU Energy Security. Events in Ukraine have propelled energy security back to the top of the EU’s foreign policy agenda. 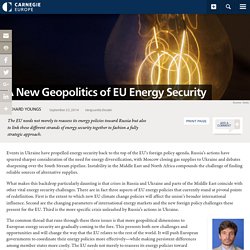 Russia’s actions have spurred sharper consideration of the need for energy diversification, with Moscow closing gas supplies to Ukraine and debates sharpening over the South Stream pipeline. Instability in the Middle East and North Africa compounds the challenge of finding reliable sources of alternative supplies. What makes this backdrop particularly daunting is that crises in Russia and Ukraine and parts of the Middle East coincide with other vital energy security challenges. There are in fact three aspects of EU energy policies that currently stand at pivotal points of redefinition. Meet the woman who first identified the greenhouse effect. Eunice Foote demonstrated the heat-trapping properties of carbon dioxide at a scientific conference in 1856, newly digitised records show Irish physicist John Tyndall is commonly credited with discovering the greenhouse effect, which underpins the science of climate change. 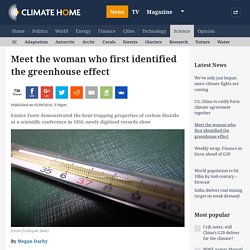 Starting in 1859, he published a series of studies on the way greenhouse gases including carbon dioxide trapped heat in the Earth’s atmosphere. A recently digitised copy of The American Journal of Science and Arts suggests a woman beat him to it, however. It includes a presentation by Eunice Foote to a top US science conference in 1856. Sciencemag. Last month, geographer Richard Heede received a subpoena from Representative Lamar Smith (R-TX), chairman of the House of Representatives Committee on Science, Space, and Technology. Smith, a climate change doubter, became concerned when the attorneys general of several states launched investigations into whether ExxonMobil had committed fraud by sowing doubts about climate change even as its own scientists knew it was taking place.

The congressman suspected a conspiracy between the attorneys general and environmental advocates, and he wanted to see all the communications among them. Predictably, his targets included advocacy organizations such as Greenpeace, 350.org, and the Union of Concerned Scientists. They also included Heede, who works on his own aboard a rented houseboat on San Francisco Bay in California. Heede is less well known than his fellow recipients, but his work is no less threatening to the fossil fuel industry. The Challenge of Cutting Coal Dependence. But making those who will suffer from this transformation whole is not just a matter of fairness. 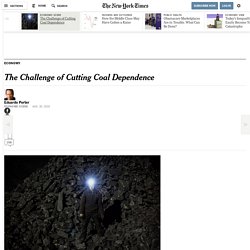 A successful transition to a low-carbon future requires their support. And yet they remain pretty much an afterthought in the public debate over climate change. “The scale and the scope of the transition is enormous,” said Matt Baker, a former commissioner with the Colorado Public Utilities Commission who is now a program officer for energy and climate at the William and Flora Hewlett Foundation. “You can’t do it in the time frame we are thinking about without the consent of the so-called losers in the transition.” 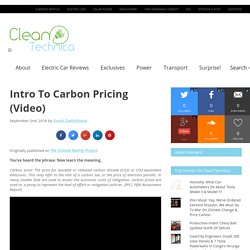 The Human Impact upon Planet Earth. Interview mit Frank Umbach. Are We Feeling Collective Grief Over Climate Change? In 1977, I was in middle school in Michigan, and a science teacher shared a tidbit off-curriculum. 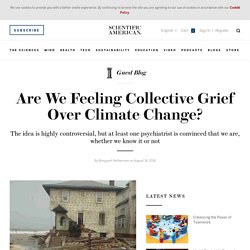 Some scientists had postulated that as a result of "pollution," heat-trapping gasses might one day lead to a warming planet. Dubbed "the greenhouse effect," the image was clear in my 12-year old mind: people enclosed in a glass structure, heating up like tomatoes coaxed to ripen. It was an interesting concept, but something in the very, very distant future.

Fast-forward ~ 30 years later. “Gravity Power” Energy Storage Plans in Germany. October 3rd, 2013 by Guest Contributor Originally published on the Lenz Blogby Karl-Friedrich Lenz I am familiar with the idea of using large holes in the ground with a piston of mountain size moved hydraulically as an alternative to pumped water energy storage from Eduard Heindl’s concept of “Lageenergiespeicher” (Statusenergystorage, in a direct translation). Instead of pointing to past posts on this blog on the concept, I’ll just go ahead and reprint them: Moving Mountains for Energy Storage, July 1, 2013 TedX talk by Professor Heindl on his idea of storing energy: I have blogged about this concept before, in November 2011. Why Superfreakonomics' authors are wrong on geo-engineering. Many commentators have already pointed out dozens of misquotes, misrepresentations and mistakes in the 'Global Cooling' chapter of the new book SuperFreakonomics by Ste[ph/v]ens Levitt and Dubner (see Joe Romm (parts I, II, III, IV, Stoat, Deltoid, UCS and Paul Krugman for details.

Michael Tobis has a good piece on the difference between adaptation and geo-engineering). Unfortunately, Amazon has now turned off the 'search inside' function for this book, but you can read the relevant chapter for yourself here (via Brad DeLong). However, instead of simply listing errors already found by others, I'll focus on why this chapter was possibly written in the first place. NRC geoengineering report: Climate hacking is dangerous and barking mad. Photo illustration by Juliana Jimenez Jaramillo. Photo by Frank Bienewald/LightRocket via Getty Images Some years ago, in the question-and-answer session after a lecture at the American Geophysical Union, I described certain geoengineering proposals as “barking mad.” The remark went rather viral in the geoengineering community.