2-day conference on Hunger. Climate change & food. When the Tunisian street vendor, Mohamed Bouazizi, set himself on fire on 17 December 2010, it was in protest at heavy-handed treatment and harassment in the province where he lived. 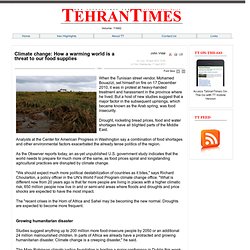 But a host of new studies suggest that a major factor in the subsequent uprisings, which became known as the Arab spring, was food insecurity. Drought, rocketing bread prices, food and water shortages have all blighted parts of the Middle East. Analysts at the Center for American Progress in Washington say a combination of food shortages and other environmental factors exacerbated the already tense politics of the region. As the Observer reports today, an as-yet unpublished U.S. government study indicates that the world needs to prepare for much more of the same, as food prices spiral and longstanding agricultural practices are disrupted by climate change. Climate change & hunger: an issue of justice. Any views expressed in this article are those of the author and not of Thomson Reuters Foundation. 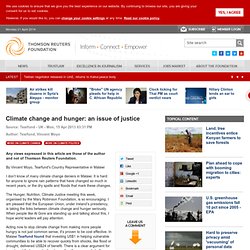 By Vincent Moyo, Tearfund's Country Representative in Malawi I don’t know of many climate change deniers in . It is hard for anyone to ignore rain patterns that have changed so much in recent years, or the dry spells and floods that mark these changes. The Hunger, Nutrition, Climate Justice meeting this week, organised by the Mary Robinson Foundation, is so encouraging. Climate change is worsening world hunger. Climate justice - three challenges IDS. The Dublin conference on hunger, nutrition and climate justice, currently underway, aims to inspire innovative thinking and solutions, by bringing together global development leaders with people at the receiving end of the effects of climate change and food and nutrition insecurity. 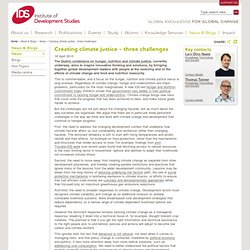 This is commendable, and a focus on the hunger, nutrition and climate justice nexus is long overdue. Regardless of climate change, hunger and undernutrition are major problems, particularly for the most marginalised. A new IDS-led Hunger and Nutrition Commitment Index (HANCI) shows that governments vary widely in their political commitment to tackling hunger and undernutrition. Climate change brings new risks that could undo the progress that has been achieved to date, and make future goals harder to achieve.

But the challenges are not just about the changing hazards, but as much about the way societies are organised. Dublin conference learns how Mongolian herders have developed resilience to adverse climate events - Asia-Pacific - worldandmedia.com. Wednesday, 17 April 2013 06:57 Written by Niamh Griffin Ms Bayarmaa Baljinnyam’s youngest daughter with the Baljinnyam family goat herd in Mongolia. 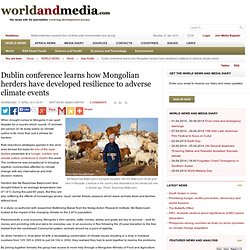 Livestock in the country was decimated by the climate just over a decade ago. Photo: Bayarmaa Baljinnyam. When drought comes to Mongolia it can spell disaster for a country which counts 15 animals per person on its dusty plains so climate justice is far more than just a phrase for herders. Dublin conference: A bottom-up approach - Devex. High-level aid officials and close to 100 people from local communities across Africa and Asia will be participating today in a conference in Dublin that aims to drive post-2015 development agenda discussions on the interlinkages among hunger, nutrition and climate change. 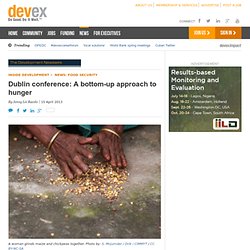 The Dublin Conference on Hunger, Nutrition, Climate Justice — hosted by the Mary Robinson Foundation-Climate Justice and the Irish government, which currently holds the EU presidency — will act as a platform for the aid community to exchange ideas on tackling hunger and malnutrition. About 870 million people — 563 million of them from Asia-Pacific — continue to suffer from hunger, according to the the FAO’s 2012 State of Food Insecurity in the World. Climate change is expected to add 10 to 20 percent more to this number by 2050.

It adds to the frequency and intensity of natural disasters, affects crop production and water access. Similarly important is ensuring food produced is packed with sufficient nutrients. Examiner on climate targets. 15/04/2013 - 09:42:48Back to Ireland Home A major conference on global hunger is taking place in Dublin today. 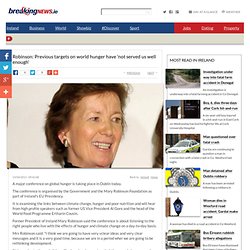 The conference is organised by the Government and the Mary Robinson Foundation as part of Ireland's EU Presidency. It is examining the links between climate change, hunger and poor nutrition and will hear from high profile speakers such as former US Vice President Al Gore and the head of the World Food Programme Ertharin Cousin. Former President of Ireland Mary Robinson said the conference is about listening to the right people who live with the effects of hunger and climate change on a day-to-day basis.

Mrs Robinson said: "I think we are going to have very vclear ideas and very clear messages and it is a very good time, because we are in a period wher we are going to be rethinking development. "It is coming to the end of the millenium development period, those goals have served us but not well enough. "We have one in seven still hungry, children stunted from malnutrtion. Gore calls for action on climate change - Irish Times. Guardian on Michael D. speech. Michael Higgins told the Dublin conference on hunger, nutrition and climate that hunger is the 'grossest of human rights violations'. 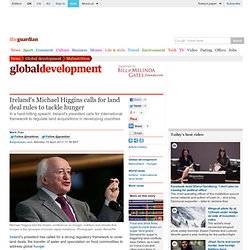 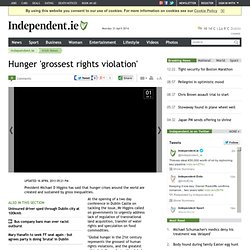 Hunger ‘at heart of Irish foreign policy’ - Irish Times. Impact of climate change, hunger and poor nutrition to be explored at major international conference. The FINANCIAL -- Former US Vice-President Al Gore and representatives of communities living on the frontline of climate change among those who will attend. 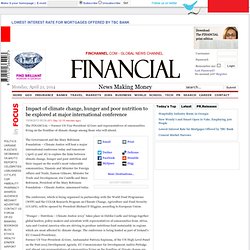 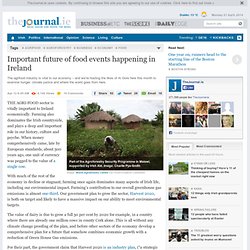 Image: Charlie Pye-Smith THE AGRI-FOOD sector is vitally important to Ireland economically. Farming also dominates the Irish countryside, and plays a deep and important role in our history, culture and psyche. When money comprehensively came, late by European standards, about 500 years ago, one unit of currency was pegged to the value of a single cow. With much of the rest of the economy in decline or stagnant, farming once again dominates many aspects of Irish life, including our environmental impact.

The value of dairy is due to grow a full 50 per cent by 2020 for example, in a country where there are already one million cows in county Cork alone. For their part, the government claim that Harvest 2020 is an industry plan, (“a strategic policy document”) and thus not in need of a proper environmental audit. Food Events Each event brings some important aspects to the table. Agroforestry. Irish Indo on Mary Robinson. Lise Hand – Published 16 April 2013 04:00 AM Mary Robinson was sporting the smile of a contented woman. She was about to welcome Michael D Higgins to the official opening session of a two-day global conference on world hunger which she was co-hosting along with the Government.

Mary had deployed her formidable reputation to attract a host of speakers to the event which was titled 'Hunger, Nutrition, Climate Justice'. Michael D was giving the opening address, while the keynote speech will be delivered this afternoon by former US vice-president Al Gore. Nonetheless, there was an informal feel to the event – each political speaker was 'twinned' with a person working in the frontline of hunger eradication. Michael D Higgins arrived along with his wife Sabina and Mr Gilmore, and the President was given a standing ovation as he entered the conference room. As is his wont, Michael D was forthright on the subject of inequality. Mrs Robinson added a personal touch to her speech.

Irish Independent. Tom Arnold & Tony Lake on stunting. UNICEF report to reveal link between hunger and climate change. Peter Power and Eamon Gilmore. Pic: Andres Poveda. 15/04/2013 - 07:57:44Back to Ireland Home A quarter of the world's children under five are undernourished, according to UNICEF. UNICEF: Climate food crisis a disaster for children. As Al Gore touches down in Dublin for the Hunger, Nutrition, Climate Justice conference in Dublin, UNICEF’s Natasha Adams explains why children will be hit the hardest by a climate induced food crisis. By Natasha Adams According to the International Food Policy Research Institute (IFPRI) 25 million more children will be malnourished in 2050 due to the effects of climate change. The impact of climate change on access to food is huge. Natural hazards like droughts and floods are becoming more frequent and more severe, and rainfall patterns are changing. As the climate changes, this affects how much food can be grown across the world.

In some places, the effects will be felt much sooner than that – arguably they are being felt already. Urgent need for international deal to tackle climate change, says Hogan. Louise Hogan – Updated 16 April 2013 02:10 PM Environment Minister Phil Hogan said Ireland was using its EU Presidency to help advance the negotiations on climate change which must be central to any new development goals drawn-up after 2015.