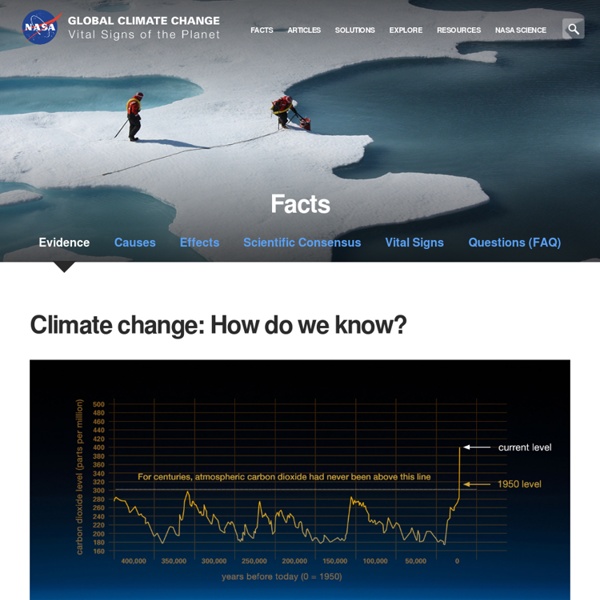 The Earth's climate has changed throughout history. Just in the last 650,000 years there have been seven cycles of glacial advance and retreat, with the abrupt end of the last ice age about 7,000 years ago marking the beginning of the modern climate era — and of human civilization. Most of these climate changes are attributed to very small variations in Earth’s orbit that change the amount of solar energy our planet receives. Scientific evidence for warming of the climate system is unequivocal. The current warming trend is of particular significance because most of it is very likely human-induced and proceeding at a rate that is unprecedented in the past 1,300 years.1 Earth-orbiting satellites and other technological advances have enabled scientists to see the big picture, collecting many different types of information about our planet and its climate on a global scale. The evidence for rapid climate change is compelling: Sea level rise Global temperature rise Warming oceans Glacial retreat

Understanding the Link Between Climate Change and Extreme Weather On This Page: Changes in Extreme Weather and Climate Events Scientists study many aspects of change in extreme weather and climate events. These include: Frequency: Are events occurring more often than they did in the past? Intensity: Are events getting more severe, with the potential for more damaging effects? Two degrees: Will we avoid dangerous climate change? 09 Dec 2014, 11:30Simon Evans Limiting warming to no more than two degrees has become the internationally accepted target for climate policy, as we saw in the first blog of our series of pieces looking at the two degrees limit. Scientists think the risks of climate change increase as temperatures rise.

Climate change What’s new On 27 February 2014 the Royal Society and the US National Academy of Sciences launched a new publication ‘Climate change: Evidence & Causes’. This new guide gives an overview of climate science, making clear what is well-established, current areas of active debate and ongoing research. Environmental Governance - United Nations Environment Programme United Nations Environment Programme environment for development Environmental Governance The new InforMEA learning platform is now live. Start learning! CO2 sinks - Oceans Carbon dioxide readily dissolves in water and the oceans provide a huge reservoir of carbon. Across the world's oceans there is a continual cycle of equilibration of dissolved carbon dioxide in water with carbon dioxide in the atmosphere. Around 88 thousand million tonnes of carbon is released from the surface of the world's oceans each year, with an annual uptake by the oceans of 90 thousand million tonnes. Consequently, the net uptake of carbon dioxide by oceans is estimated to be approximately 2 thousand million tonnes annually.

Oil Investors at Brink of Losing Trillions of Dollars in Assets. Gore: It's That Road Runner Moment Climate: Now or Never A major threat to fossil fuel companies has suddenly moved from the fringe to center stage with a dramatic announcement by Germany’s biggest power company and an intriguing letter from the Bank of England. A growing minority of investors and regulators are probing the possibility that untapped deposits of oil, gas and coal -- valued at trillions of dollars globally -- could become stranded assets as governments adopt stricter climate change policies. Targeted Killing in International Law Targeted Killing in International Law is a book about the legality of targeted killing, written by Nils Melzer. It was first published by Oxford University Press in May 2008. The book explores the history of targeted killing as a government strategy by multiple countries including the United States, the United Kingdom, Israel, Switzerland and Germany; for both military and law enforcement purposes. Melzer argues that directly after the September 11 attacks in the United States, perceptions of the tactic became more positive.

THE ECONOMICS OF ECOSYSTEMS AND BIODIVERSITY - Environment Additional tools Human well-being is dependent upon "ecosystem services" provided by nature for free. Such services include water provision, air purification, fisheries, timber production and nutrient cycling to name a few. These are predominantly public goods with no markets and no prices, so their loss often is not detected by our current economic incentive system and can thus continues unabated. A variety of pressures resulting from population growth, changing diets, urbanisation, climate change and many other factors is causing biodiversity to decline.

Giant iceberg poised to break off from Antarctic shelf A giant iceberg, with an area equivalent to Trinidad and Tobago, is poised to break off from the Antarctic shelf. A thread of just 20km of ice is now preventing the 5,000 sq km mass from floating away, following the sudden expansion last month of a rift that has been steadily growing for more than a decade. The iceberg, which is positioned on the most northern major ice shelf in Antarctica, known as Larsen C, is predicted to be one of the largest 10 break-offs ever recorded. Professor Adrian Luckman, a scientist at Swansea University and leader of the UK’s Midas project, said in a statement: “After a few months of steady, incremental advance since the last event, the rift grew suddenly by a further 18km during the second half of December 2016. Only a final 20km of ice now connects an iceberg one quarter the size of Wales to its parent ice shelf.” “If it doesn’t go in the next few months, I’ll be amazed,” Luckman told BBC News.

The Last Time This Awful Thing Happened, We Didn't Even Exist This is what it looked like over the last two years. See, it doesn't look so bad. Click image to Zoom If we zoom out, it looks a little bit more intimidating. Earth warming to climate tipping point, warns study Image copyright AP A warmer world will release vast volumes of carbon into the atmosphere, potentially triggering dangerous climate change, scientists warn. Writing in journal Nature, they project that an increase of 1C (1.8F) will release an additional 55 billion tonnes of carbon into the atmosphere by 2050. This could trigger a "positive feedback" and push the planet's climate system past the point of no-return. Previous assessments have not taken carbon released by soil into account. In their Nature paper, an international team of scientists said that the majority of the Earth's terrestrial store of carbon was in the soil.

Two degrees? Sounds nice. The reality will be rather different If we continue to emit ever-greater quantities of CO2 and other greenhouse gases into the atmosphere, then average global temperatures will rise by 2°C over the next three decades compared to pre-industrial times. Most scientists agree that anything higher is dangerous, though many argue that even this is too much. As the battles to reach an agreement in Paris begin, and with so much at stake, it is perhaps curious that few people really understand what a 2°C rise in average temperatures will mean.

Carbon bubble According to the UK MP Committee overvaluing companies that produce fossil fuels and greenhouse gases poses a serious threat to the economy. The UK MPs Committee warned British government and Bank of England of the risks of the carbon bubble in 2014.[1] Value[edit] Author Bill McKibben has estimated that to achieve human life to continue in the world up to $20tn worth of fossil fuel reserves will need to remain in the ground, essentially worthless.[2] British Stern report in 2006 stated that the benefits of strong, early action to decrase the use of oil, coal and gas considerably outweigh the costs. Fossil energy contributors, building industry and land use responsible ignore the responsibility in the external costs and ignore the Polluter pays principle according which the climate change costs will be paid by historical climate gas producers. History[edit]