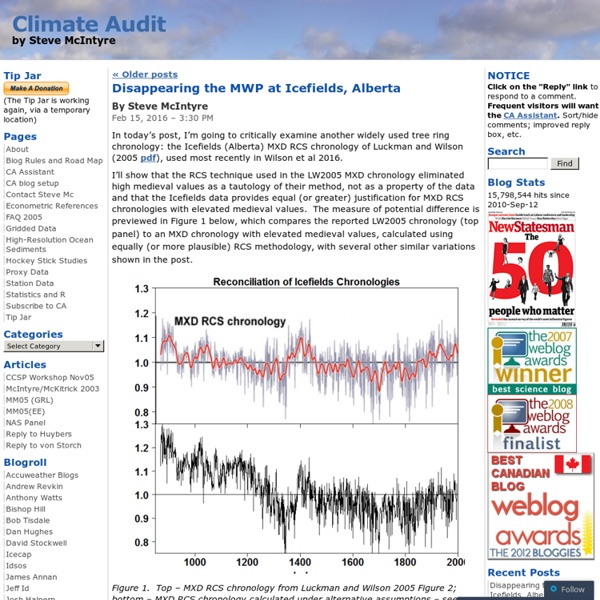 - Bishop Hill blog the Air Vent The Science of Doom Tom Nelson Watts Up With That? | The world's most viewed site on global warming and climate change Scientific heresy I'm grateful to Matt Ridley for allowing me to post the text of his Angus Millar lecture at the RSA in Edinburgh. [Update: I have prepared a PDF version of the talk, which has the important slides as well.] It is a great honour to be asked to deliver the Angus Millar lecture. I have no idea whether Angus Millar ever saw himself as a heretic, but I have a soft spot for heresy. My topic today is scientific heresy. Let us run through some issues, starting with the easy ones. Astronomy is a science; astrology is a pseudoscience. Evolution is science; creationism is pseudoscience. Molecular biology is science; homeopathy is pseudoscience. Vaccination is science; the MMR scare is pseudoscience. Oxygen is science; phlogiston was pseudoscience. Chemistry is science; alchemy was pseudoscience. Are you with me so far? A few more examples. Three more controversial ones. So is quite a lot, though not all, of the argument for organic farming. So, in a sense by definition, is religious faith. Lesson number 3.

Injustice Everywhere RealClimate Climate Depot RealClimate XKCD, the brilliant and hilarious on-line comic, attempts to answer the question How much CO2 is contained in the world’s stock of bottled fizzy drinks? How much soda would be needed to bring atmospheric CO2 back to preindustrial levels? The answer is, enough to cover the Earth with 10 layers of soda cans. However, the comic misses a factor of about two, which would arise from the ocean. At any rate, the oceans are acting as a CO2 buffer, meaning that it’s absorbing CO2 as it tries to limit the change to the atmospheric concentration. Ten layers of soda cans covering the whole earth sounds like a lot. Further Reading Tans, Pieter. Carbon dioxide capture and storage IPCC Report, 2005

Sound Stimulus: How Congress Can Find and Fund the Roads that Reduce Our Oil Addiction and Improve Our Quality of Life With input from the incoming Obama Administration, Congress is now building a stimulus bill that will likely result in the largest investment in U.S. infrastructure since the creation of the interstate highway system. For this hundred billion or more in spending to leave our country strategically stronger, not weaker, this moment must be used to chart a new direction for the nation’s transportation systems. The stimulus package must fund major investments in public transportation and high-speed rail, one of the causes the T4 America Campaign is leading with CNU’s full support. But perhaps most of all, the stimulus must distinguish between the right kind and wrong kind of pavement — those investments that make communities more livable and sustainable versus those that weaken our strategic position and make families frighteningly vulnerable to volatile energy prices. Image: A Civic Vision forTurnpike Air Rights, Boston, MA, by Goody Clancy and Associates.