Representative Concentration Pathways (RCPs) Climate Model Tuning and Initialization. Energy Budget. Feedbacks. Uncertainty. Error Propagation. Drivers of Climate. CO2 Climate Sensitivity. Notch-Delay Solar Theory. Climate Models for the Layman. Claims that the planet is threatened by man-made global warming are based on science that is based on inadequate computer modelling. 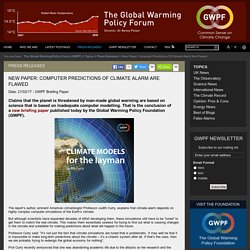 That is the conclusion of a new briefing paper published today by the Global Warming Policy Foundation (GWPF). The report’s author, eminent American climatologist Professor Judith Curry, explains that climate alarm depends on highly complex computer simulations of the Earth’s climate. But although scientists have expended decades of effort developing them, these simulations still have to be “tuned” to get them to match the real climate. This makes them essentially useless for trying to find out what is causing changes in the climate and unreliable for making predictions about what will happen in the future. There Are Models And There Are Models – Watts Up With That?

Guest Post by Willis Eschenbach I’m 74, and I’ve been programming computers nearly as long as anyone alive. 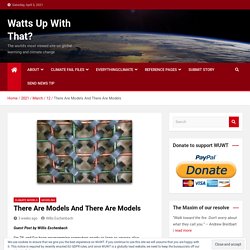 When I was 15, I’d been reading about computers in pulp science fiction magazines like Amazing Stories, Analog, and Galaxy for a while. I wanted one so badly. Why? Structural errors in global climate models. Posted on June 20, 2020 by Gerald Browning Climate model sensitivity to CO2 is heavily dependent on artificial parameterizations (e.g. clouds, convection) that are implemented in global climate models that utilize the wrong atmospheric dynamical system and excessive dissipation. 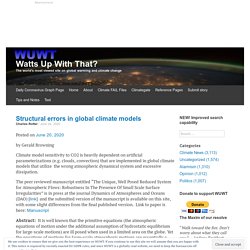 The peer reviewed manuscript entitled “The Unique, Well Posed Reduced System for Atmospheric Flows: Robustness In The Presence Of Small Scale Surface Irregularities” is in press at the journal Dynamics of Atmospheres and Oceans (DAO) [link] and the submitted version of the manuscript is available on this site, with some slight differences from the final published version. Link to paper is here: Manuscript. How much global warming should IPCC’s next report predict? – Watts Up With That? By Christopher Monckton of Brenchley Mainstream climate scientists have been busy in the last two years, publishing updated climatological data in time for IPCC’s forthcoming Sixth Assessment Report. 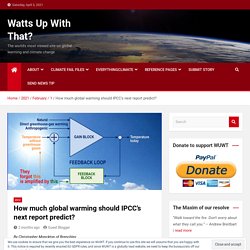 Ross McKitrick: The flaw in relying on worst-case-scenario climate model. Whenever you read a media story about how we’re heading toward catastrophe if we continue operating “business as usual” — i.e., if we don’t slash carbon emissions — the reports are almost always referring to a model simulation using RCP8.5. 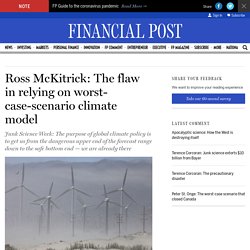 And you can bet that nowhere in the story will they explain that RCP8.5 is an implausible worst-case scenario that was never meant to represent a likely base case outcome, or that scientists have begun castigating its usage as a prediction of a doomed business-as-usual future. The term RCP8.5 refers to a greenhouse gas emissions scenario often used by scientists for climate model projections. Climatologist Dr. Judith Curry: Climate Scientists’ “Apocalyptic Predictions Depend On Unrealistic Climate Model Simulations” Dutch investigative journalist Marijn Poels recently interviewed leading climatologist Dr. 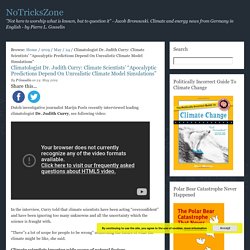 Judith Curry, see following video: In the interview, Curry told that climate scientists have been acting “overconfident” and have been ignoring too many unknowns and all the uncertainty which the science is fraught with. “There”s a lot of scope for people to be wrong” concerning the future of what the climate might be like, she said. Climate scientists ignoring wide scope of natural factors She tells viewers that the scientists were contracted to be “narrowly focused” on man’s impact and thus ended up ignoring “what may be the most important factors”, such as solar and oceanic cycles.

Escape from model land. By Judith Curry “Letting go of the phantastic mathematical objects and achievables of model- land can lead to more relevant information on the real world and thus better-informed decision- making.” – Erica Thompson and Lenny Smith The title and motivation for this post comes from a new paper by Erica Thompson and Lenny Smith, Escape from Model-Land. 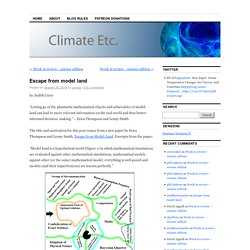 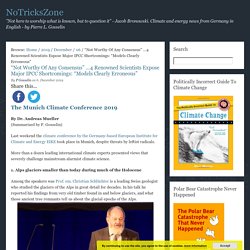 Andreas Mueller (Summarized by P. Gosselin) Last weekend the climate conference by the Germany-based European Institute for Climate and Energy EIKE took place in Munich, despite threats by leftist radicals. What do you mean by “mean”: an essay on black boxes, emulators, and uncertainty. Guest post by Richard Booth, Ph.D. 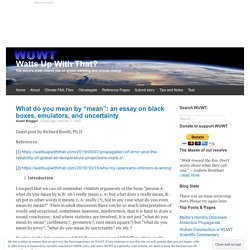 Climate Models Have Been Predicting Too Much Warming. By Paul Homewood John Christy has a new paper out about climate models are predicting too much warming: Below is the GWPF press release: Leading scientist warns that computer simulations are unreliable. 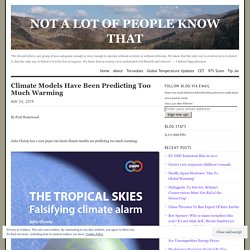 Models Wrong About the Past Produce Unbelievable Futures. Models vs. Observations. Christy and McKitrick (2018) Figure 3 The title of this post is the theme driven home by Patrick J. Two European Professors: IPCC Climate Modeling Methodology Opens Door To “Fake Conclusions” …”Manipulations”” Two European professors recently wrote that the IPCC projections of future warming are based on huge unknowns, and do not take the past properly into account. This means that projections of the future of the world’s climate are unreliable, according to Samuel Furfari, Professor at the Free University of Brussels, and Henri Masson, Professor (Emeritus), University of Antwerpen.

According to the two professors, the GISS Surface Temperature Analysis (GISTEMP v4) is an estimate of global surface temperature change (one that is often used by climate scientists for their reports to the media). New Study Shows Climate Models Not Even Close To Be Useful For Policymaking. “Precipitation Remains The Achilles’ Heel “

A new paper just appeared in the journal of Atmospheric Research titled: “Climate classifications from regional and global climate models: Performances for present climate estimates and expected changes in the future at high spatial resolution“. Hat tip: Reader Mary Brown Though the title itself reveals little about the quality of the performance of models, the study suggests that models still have a long way to go before really being useful for policymakers to go by. The study concludes, “The modeling of precipitation remains the Achilles’ heel of models and thus of multidimensional indices, which are very sensitive to this variable.”

Well, just about every major climate index is directly related to precipitation. Thus if the models cannot get precipitation right, then everything else will also be wrong – or at least so far off the mark as to be useless. The plea for us to worship crude models. User's Guide to the Community Atmosphere Model CAM-5.0. This chapter describes how to build and run CAM in its standalone configuration. We do not provide scripts that are setup to work out of the box on a particular set of platforms. If you would like this level of support then consider running CAM from the CESM scripts (see CESM-1.0 User's Guide). We do however provide some examples of simple run scripts which should provide a useful starting point for writing your own scripts (see the Section called Sample Run Scripts). To build CAM for SPMD execution it will also be necessary to have an MPI library (version 1 or later). Description of the NCAR Community Atmosphere Model 3.0. CESM1.2: CAM Documentation. Introduction Version 5.3 of the Community Atmosphere Model (CAM) is the latest in a series of global atmosphere models developed primarily at the National Center for Atmospheric Research (NCAR).

The notable improvements for CAM are now detailed along with the improvements for all model components in the section What's new in CESM1.2.0 - Science. IPCC DDC Glossary. Detection and Attribution of Man-Made Climate Change. What can we learn from climate models? What can we learn from climate models? Part II. EXAMPLES OF HOW AND WHY THE USE OF A “CLIMATE MODEL MEAN” AND THE USE OF ANOMALIES CAN BE MISLEADING. Alternate Title: An Average of Climate Models, Which Individually Give Wrong Answers, Cannot, By Averaging Them, Give the Right Answer, So A Model Mean Can Be Very Misleading. And The Use of Anomalies in Model-Data Comparisons, When Absolute Values Are Known, Can Also Be Very Misleading For the purposes of examples only, I’m going to initially present comparison graphs of monthly global land-ocean surface temperature data and model outputs, all of which include (roughly) 3.5 to 4 deg C annual cycles. Why am I presenting model-data comparisons with overlapping annual cycles, you ask?

There’s something very unusual about a couple of ensemble members from the CMIP5 archive (the simulations with Historic & RCP8.5 Forcings) when you compare them to the Berkeley Earth data. You’ve got to see this to believe it! Study: A new method to evaluate overall performance of a climate model. On the Elusive Absolute Global Mean Surface Temperature – A Model-Data Comparison.

How the IPCC turn calculated numbers into heat « Okulær. Okulær « Eyeing the World – Climate Musings. Model falsifiability and climate slow modes. Expert Climate Scientists Conclude From Historical Trends That Anthropogenic Factors Are Overweighted In Models. By P Gosselin on 4. November 2017 What follows is another paper to add to the list of 400 peer-reviewed papers published this year which show claims surrounding man-made global warming are in fact hyped up. ================================== By Dr.

An eminent climate scientist describes the frontiers of climate science. Important study: Waste heat is a major source of national warming, significantly pollutes climatic record. Feet of clay: The official errors that exaggerated global warming. The Difference Between Energy, Work and Power – and Why it Matters to Climate Prediction.