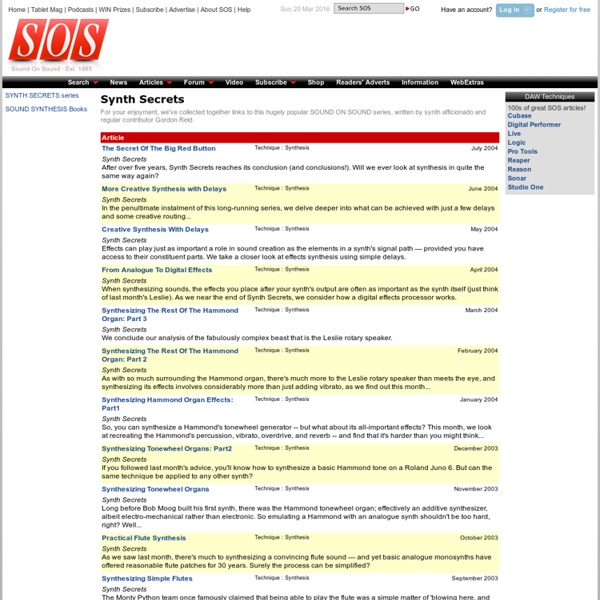 The 10 best lectures on electronic music ever; watch them now Thanks to the wonders of the internet, one’s quest for knowledge really has no limitations. Between the plethora of digitized articles, documentaries, and—on the technical side of things—instructional videos and guides around, there is no shortage of information accessible to those who seek to learn more about the ever-expanding world of electronic music. The lecture, however, makes for a unique form of information sharing as it not only provides the necessary facts and details, but also allows for attendees (and, eventually, viewers) to get a sense of the person behind these facets of knowledge.

Music Treasures Consortium (Performing Arts Encyclopedia, Library of Congress) - Vimperator "Um mitternacht" by Franz Schubert. [manuscript score]. Music Division, Library of Congress. view manuscript Calculus I Show Mobile NoticeShow All NotesHide All Notes You appear to be on a device with a "narrow" screen width (i.e. you are probably on a mobile phone). Due to the nature of the mathematics on this site it is best views in landscape mode. If your device is not in landscape mode many of the equations will run off the side of your device (should be able to scroll to see them) and some of the menu items will be cut off due to the narrow screen width. Here are the notes for my Calculus I course that I teach here at Lamar University.

PROJECT: Mooncircle Project: Mooncircle, as the name reveals, has been on a journey to the moon since day one, exploring the frontiers of music and art, always looking for new discoveries and giving a different perspective to look at the earth. In it’s 10 year history the label has published roughly 100 releases by equally as many artists from all corners of this globe and, therefore, the selection of sounds on this compilation represents the development of the label from the past, present and going into the future. Some of the artists featured on this compilation have been a part of the label from its very beginning, like CYNE, Manuvers and Jahbitat, whose song will be the last one he produced and published under this moniker, while others, like Robot Koch, fLako and Long Arm, are outstanding examples of its growing popularity and success. The logo and artwork represent someone who was very close to the label, especially in the early years but unfortunately passed on and whom this box is dedicated to.

The Basic Blown Pipe The Basic Blown Pipe Tutorial home Blown pipes include flutes, recorders, and many organ pipes. A blown pipe is probably the simplest wind model, so it’s a good place to start. DIY @ Detachment 3 Laboratories - ph33r t3h m4g1k sm0k3 The Master Synthesizer Book List r1.1 This is intended as a one-stop reference for analog and digital synthesizer design, covering both the specifics of design and the general fields that encompass them. Wherever possible, I have used books from Dover Publications because of their technical depth, illustrious authors, and budget-minded pricing. Al Bregman's Website - Vimperator Audio demonstrations of auditory scene analysis Note: The following material originally accompanied an audio compact disk of demonstrations,Bregman, A.S., & Ahad, P. (1996) Demonstrations of Auditory Scene Analysis: The Perceptual Organization of Sound. That is why the word "disk" appears occasionally in the explanations. In the present context, this word should be understood as "demonstration" or "set of demonstrations". Table of Contents Sequential integration

Learn about the Initiative toward Computer-Based Math Education Whether it's bored students, dissatisfied employers, bewildered governments, or frustrated teachers, almost everyone thinks there's a problem with math (and STEM) education today. There is a solution, but it needs a fundamental change to the school subject we call math. It needs to be clearly articulated and decisively acted upon. That's why Conrad Wolfram has founded computerbasedmath.org. He and many others see a growing chasm between math in education and math outside, between the increasingly irrelevant school math curriculum that contrasts with the critical and growing importance of math and its uses in the real world.