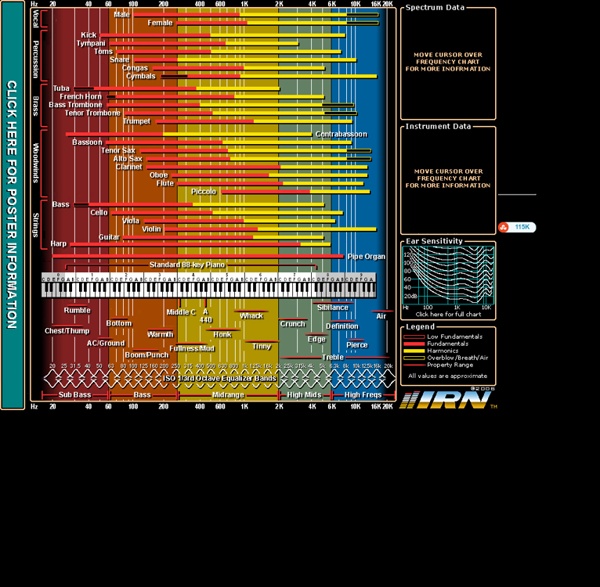 6 Different Frequencies and How to Spot Them I can never get enough information on EQ. I love to know how everybody EQed a certain vocal or drum sound to get that tight punch or shimmering highs so prominent in a mix. When you've mastered the EQ spectrum and you know where to go when you need to fix or embellish something, you are definitely ahead of the game. TT Dynamic Range Meter - Fight the Loudness War ( Or, how to NOT smash it to hell ! ) Update – I wrote this post a few years ago now, and the TT meter is no longer the only kid on the block – although it’s still a great choice. To see a new video round-up of some currently available dynamic range meters, click here . Loudness has always been an important topic in mixing, and especially mastering – never more so than today. Knowing how loud is too loud has always been difficult.

Black Midi: compositions so complex humans can't perform them / Boing Boing Rhizome takes a look at the world of Black Midi, compositions with so many notes that to print them as musical notation would result simply in a giant blob of ink on the page. We've previously written about Circus Galop, an inhumanly-polyphonic test suite for automatic pianos. This stuff makes it look rather minimalist. Making Music(Beats) on Linux/Ubuntu with Hydrogen I am going to review a couple of Music Making Softwares for Linux and am starting with the simplest and one of the best!HYDROGEN. Hydrogen basically is a pattern based drum programming software which in layman terms means, it allows you to make your own beats.And in case you aren't much into music, you might be wondering “what the hell will i do with this piece of software”...well here is a word from my friends who've tried this: “Its pretty fun playing with this software, n even without knowing much, you could actually MAKE SUM MUSIC!!!” About the software:(technical:from the software's website itself!) General Very user-friendly, modular, fast and intuitive graphical interface based on QT 3.

Music Theory - Expression Marks As of July 1, 2013 ThinkQuest has been discontinued. We would like to thank everyone for being a part of the ThinkQuest global community: Students - For your limitless creativity and innovation, which inspires us all. Teachers - For your passion in guiding students on their quest. Partners - For your unwavering support and evangelism. Create Cool 8-Bit Style Pixel Art from Ordinary Images I have to be honest. I love the look of pixelated graphics! If you’re also a fan of jaggies or old school video game graphics, here is a simple trick to relive a little bit of that low pixel-depth goodness in any version of Photoshop.

EQ GUIDE FOR NEWBIES This really helped me out when i first started. Some History Dating as far back as the 1930's, the equalizer is the oldest and probably the most extensively used signal processing device available to the recording or sound reinforcement engineer. Today there are many types of equalizers available, and these vary greatly in sophistication, from the simple bass and treble tone control of the fifties to advanced equipment like the modern multi-band graphic equalizer and the more complex parametric types. Basically, an equalizer consists of a number of electronic filters which allow frequency response of a sound system or signal chain to be altered. Over the past half century, equalizers design has grown increasingly sophisticated.

The history of electronic music from 1800 to 2015 120 Years of Electronic Music* is a project that outlines and analyses the history and development of electronic musical instruments from around 1880 onwards. This project defines ‘Electronic Musical Instrument’ as an instruments that generate sounds from a purely electronic source rather than electro-mechanically or electro-acoustically (However the boundaries of this definition do become blurred with, say, Tone Wheel Generators and tape manipulation of the Musique Concrète era). The focus of this project is in exploring the main themes of electronic instrument design and development previous to 1970 (and therefore isn’t intended as an exhaustive list of recent commercial synthesisers or software packages.) Modes of interaction for performers and composers: Atonality and just intonation as a theme in instrument design. New composition tools: Musician-free composition ’120 Years Of Electronic Music’ is an ongoing web project initiated in 1995 by the author simon.crab@gmail.com .

Recording in Ubuntu Linux (aka Free and Open Source Digital Audio Workstation) Editors Most of these toolbar buttons should be familiar to anyone that uses multitrack and sequencing programs, but the editors deserve a little extra explanation. Editors Paul Epworth People + Opinion : Artists / Engineers / Producers / Programmers With credits ranging from Kate Nash to Bloc Party, Primal Scream and the Rapture, Paul Epworth might just be Britain's busiest producer. Sam Inglis Recent years have not been kind to record producers. It's harder than ever for new talent to establish itself, while many well-known names have found themselves with more time than they would have wished to work on their golf swings. Conventional wisdom has it that the downturn in the music business and the explosion of affordable home recording are responsible, but looking at Paul Epworth's list of credits, it's tempting to offer an alternative explanation: one man is doing all the work himself.

What Do Great Musicians Have in Common? DNA At age 13, jazz great Thelonious Monk ran into trouble at Harlem's Apollo Theater. The reason: he was too good. The famously precocious pianist was, as they say, a “natural,” and by that point had won the Apollo’s amateur competition so many times that he was barred from re-entering. To be sure, Monk practiced, a lot actually. But two new studies, and the fact that he taught himself to read music as a child before taking a single lesson, suggest that he likely had plenty of help from his genes.

The Ultimate EQ Guide Please Note - The values below are merely guides, each mix is unique and individual so experimentation is advised. Low Bass: anything less than 50Hz This range is often known as the sub bass and is most commonly taken up by the lowest part of the kick drum and bass guitar, although at these frequencies it's almost impossible to determine any pitch. Sub bass is one of the reasons why 12" vinyl became available: low frequencies require wider grooves than high frequencies - without rolling off everything below 50Hz you couldn't fit a full track onto a 7" vinyl record. However we do NOT recommend applying any form of boost around this area without the use of very high quality studio monitors (not home monitors - there is a vast difference between home nearfield and studio farfield monitors costing anywhere between £5,000 and £20,000). Boosting blindly in this area without a valid reference point can and will permanently damage most speakers, even PA systems.