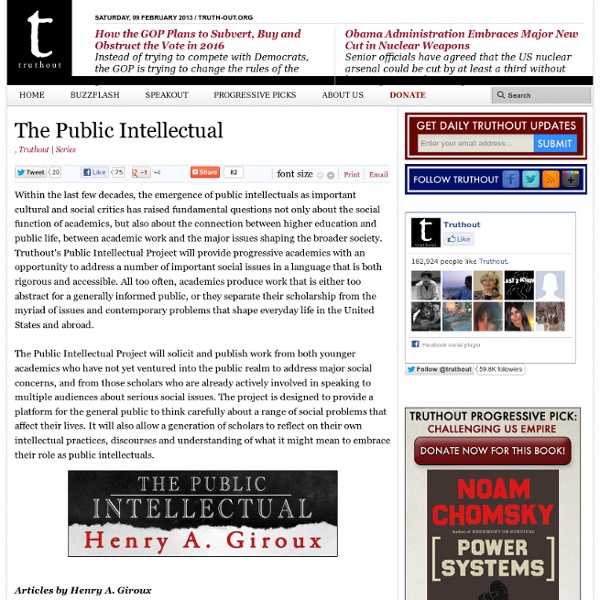 Within the last few decades, the emergence of public intellectuals as important cultural and social critics has raised fundamental questions not only about the social function of academics, but also about the connection between higher education and public life, between academic work and the major issues shaping the broader society. Truthout's Public Intellectual Project will provide progressive academics with an opportunity to address a number of important social issues in a language that is both rigorous and accessible. All too often, academics produce work that is either too abstract for a generally informed public, or they separate their scholarship from the myriad of issues and contemporary problems that shape everyday life in the United States and abroad. Articles by Henry A. Giroux Articles by (or About) Other Authors in the Public Intellectual Project Seth Adler Ian Angus Stanley Aronowitz Salvatore Babones Zygmunt Bauman Carol Becker Dr. Megan Boler Noam Chomsky David L. Simon Dawes

ISSC Welcome to The Hampton Institute: A Working-Class Think Tank So you want to Run for Office? Christopher Crotty Is there a local issue that has you hopping mad? Think you can do a better job than the people who represent you? Dont just sit there - help fix the problem by running for office. Whether youre seeking a seat on the local school board or a term as U.S. President, running for office is a challenging endeavor. 2) Check the qualifications for the office. 3) File the required papers to get yourself on the ballot. Research the office you want to hold. Share with your family all the information youve gathered, and decide if running for office is right for you. 1) Are you already involved in your community? 2) Do you volunteer for causes like the PTA or the neighborhood watch? Make a list of your fellow club members, family, friends, and colleagues you think will support you. Exploratory Committee Meeting You are not going to run for office alone. The people in the room like you. People will feel flattered to have been invited to this kind of “inner circle” meeting. Scheduler

Consumer Watchdog | Home Core Secrets: NSA Saboteurs in China and Germany The National Security Agency has had agents in China, Germany, and South Korea working on programs that use “physical subversion” to infiltrate and compromise networks and devices, according to documents obtained by The Intercept. The documents, leaked by NSA whistleblower Edward Snowden, also indicate that the agency has used “under cover” operatives to gain access to sensitive data and systems in the global communications industry, and that these secret agents may have even dealt with American firms. The documents describe a range of clandestine field activities that are among the agency’s “core secrets” when it comes to computer network attacks, details of which are apparently shared with only a small number of officials outside the NSA. “It’s something that many people have been wondering about for a long time,” said Chris Soghoian, principal technologist for the American Civil Liberties Union, after reviewing the documents. Sentry Eagle “Under Cover” Agents Corporate Partners

Craig McKie Sociological Writing What this handout is about This handout introduces you to the wonderful world of writing sociology. Before you can write a clear and coherent sociology paper, you need a firm understanding of the assumptions and expectations of the discipline. You need to know your audience, the way they view the world and how they order and evaluate information. What is sociology, and what do sociologists write about? Unlike many of the other subjects here at UNC, such as history or English, sociology is a new subject for many students. So, just what is a sociological perspective? Key assumptions and characteristics of sociological writing What are the most important things to keep in mind as you write in sociology? Argument The first thing to remember in writing a sociological argument is to be as clear as possible in stating your thesis. Although each of these three arguments seems quite different, they all share one common feature: they assume exactly what they need to be explaining. Evidence

Home In our self-governing society Who should we call on to fix broken government? We can blame politicians, the media, or special interests Till we're red or blue in the face But sometimes you just have to turn the mirror around. Want to become more effective as a citizen? Want to help shape public policy rather than be shaped by it? Want to make your voice heard loudly -- without screaming? "Song Of A Citizen" is a resource to help you do all that and more. And to help you inspire others to do the same. So read on -- and check out our videos -- and prepare to transform yourself from a frustrated civic spectator into a powerful political problem-solver. Note: This site is a temporary placeholder until the official site goes live.

Category:Government watchdog groups in the United States This category includes non-partisan, non-governmental groups in the United States whose stated mission includes monitoring branches of the state or federal governments for fraud, waste, abuse, corruption, mismanagement, illegal activity, campaign donor influence, abuse of authority, miscarriage of justice, and so forth. Groups whose primary mission is one of political or issue advocacy are not included; examples of such groups include the Reform Party and the National Rifle Association, both of which are categorized elsewhere. Truth in American Education Subcategories This category has the following 2 subcategories, out of 2 total. Pages in category "Government watchdog groups in the United States" The following 54 pages are in this category, out of 54 total.

5 Strategies to Read People’s Emotional Energy Emotions are a stunning expression of our energy, the “vibe” we give off. We register these with intuition. Some people feel good to be around; they improve your mood and vitality. Others are draining; you instinctively want to get away. This “subtle energy” can be felt inches or feet from the body, though it‘s invisible. Emotional energy is contagious. When reading emotions, realize that what others say or how they appear frequently don‘t match their energy. Here, the surrender to focus on is saying “yes” to the messages your body sends. Strategies to read emotional energy Sense people’s presence - This is the overall energy we emit, not necessarily congruent with words or behaviour. As you read people notice: does their overall energy feel warm? Watch people’s eyes – We can make love or hate with our eyes. Take time to observe people‘s eyes. Notice the feel of a handshake, hug and touch – We share emotional energy through physical contact much like an electrical current.