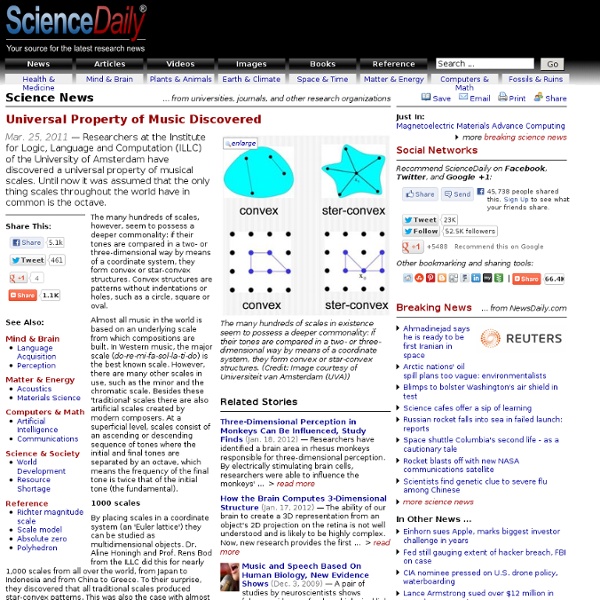 Researchers at the Institute for Logic, Language and Computation (ILLC) of the University of Amsterdam have discovered a universal property of musical scales. Until now it was assumed that the only thing scales throughout the world have in common is the octave. The many hundreds of scales, however, seem to possess a deeper commonality: if their tones are compared in a two- or three-dimensional way by means of a coordinate system, they form convex or star-convex structures. Convex structures are patterns without indentations or holes, such as a circle, square or oval. Almost all music in the world is based on an underlying scale from which compositions are built. In Western music, the major scale (do-re-mi-fa-sol-la-ti-do) is the best known scale. 1000 scales By placing scales in a coordinate system (an 'Euler lattice') they can be studied as multidimensional objects. The research results were recently published in the scientific Journal of New Music Research.

Easy Way To Remember Sharps & Flats So starting off you have all probably heard of this "Circle of fifths" thing. I thought it was a piece of crap when I first learnt it and couldn't get it at all. So I discovered an easier way to remember the sharps and flats, and it also helped me to understand the Circle of fifths, too. So, for the sharps, I'll name the keys in order of how many sharps there are. Free Music Theory Worksheets! Material on this page is free.NEW! you can now consult an index of terms used in these worksheets.Also explore a page of worksheet extras: Worksheet Answers, Test Templates and Flash Presentations. Here are some testimonials from music teachers about these workbook chapters: I have been using your fantastic music theory sheets and PDF downloads to teach high school piano theory to 28 students per class, all of whom are at different levels of study and accomplishment. Your method is comprehensive and easily accessible to students of all ages.

Tom Lehrer's "The Elements". A Flash animation by Mike Stanfill, Private Hand The Periodic Table The periodic table of the chemical elements (also periodic table of the elements or just the periodic table) is a tabular display of the chemical elements. Although precursors to this table exist, its invention is generally credited to Russian chemist Dmitri Mendeleev in 1869, who intended the table to illustrate recurring ("periodic") trends in the properties of the elements. The layout of the table has been refined and extended over time, as new elements have been discovered, and new theoretical models have been developed to explain chemical behavior. The periodic table is now ubiquitous within the academic discipline of chemistry, providing a useful framework to classify, systematize, and compare all of the many different forms of chemical behavior. The table has found many applications in chemistry, physics, biology, and engineering, especially chemical engineering.

6 Essentials to Master the Blues photo from Flickr Blues is one of the most important things to learn when you want to become a rock – jazz – metal – country – all round guitar player All these genres are related to or arisen from the blues. There is also a lot of blues in the songs you hear on the radio without even realizing it. Why the circle of fourths is so important when learning major scales Playing your major scales should be a part of your daily practice regimen. However, practicing them in a “circle of fourths” or “circle of fifths” pattern is even better. Let’s focus more on circle of fourths. If you type “circle of fourths” or “circle of fifths” in google, you can actually find a host of other examples. Notice that the keys go from: C >>> F >>> Bb >>> Eb and so forth. If this were a clock, C would be at 12 o’ clock.

Ear training Functional pitch recognition[edit] Many musicians use functional pitch recognition in order to identify, understand, and appreciate the roles and meanings of pitches within a key. To this end, scale-degree numbers or movable-do solmization (do, re, mi, etc.) can be quite helpful. Using such systems, pitches with identical functions (the key note or tonic, for example) are associated with identical labels (1 or do, for example). J. Mayer H. Architects’ Metropol Parasol opening this Sunday We’ve told you before about “Metropol Parasol”, the Redevelopment of Plaza de la Encarnación in Sevilla, designed by J. MAYER H. Architects. March 27 marks the opening, while the final completion of the project is scheduled for April 2011. More images and complete press release after the break. Gypsy scale The term Gypsy scale,[a] refers to one of several musical scales named after their association with Romani or stereotyped "Gypsy" music: Hungarian minor scale, minor scale with raised fourth and seventh degrees, also called double harmonic minor scale.Minor gypsy scale, minor scale with raised fourth but natural seventh. [1] Both these scales are also called Hungarian gypsy scale.Spanish Gypsy scale, another name for the Phrygian dominant scale. [1][2]Double harmonic scale, the fifth mode of the Hungarian gypsy scale. [3] Notes[edit] References[edit]

Outline of music The following outline is provided as an overview of and topical guide to music: General topics[edit] History of music[edit] Timeline of musical events – By region or ethnicity[edit]