Heutagogy and lifelong learning: A review of heutagogical practice and self-determined learning 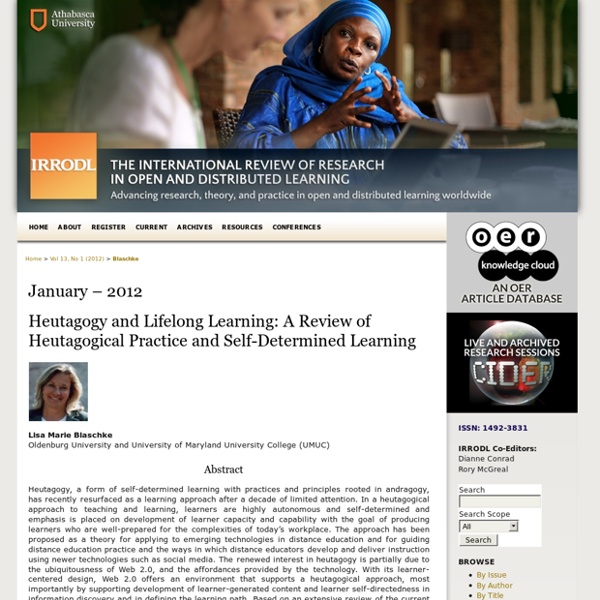 Lisa Marie Blaschke Oldenburg University and University of Maryland University College (UMUC) Abstract Heutagogy, a form of self-determined learning with practices and principles rooted in andragogy, has recently resurfaced as a learning approach after a decade of limited attention. In a heutagogical approach to teaching and learning, learners are highly autonomous and self-determined and emphasis is placed on development of learner capacity and capability with the goal of producing learners who are well-prepared for the complexities of today’s workplace. The approach has been proposed as a theory for applying to emerging technologies in distance education and for guiding distance education practice and the ways in which distance educators develop and deliver instruction using newer technologies such as social media. The renewed interest in heutagogy is partially due to the ubiquitousness of Web 2.0, and the affordances provided by the technology. Introduction Research Method Conclusion

The Progressive-Traditional Pedagogy Tree This post is based on my talk for #PedagooLondon14 at the IoE. Having offered to run a workshop ages ago, when finally pressed for a title by the wonderful, patient organiser Helene Galdinoshea, I’d just been reading another rather tedious, acrimonious tit-for-tat twitter exchange. Progressives vs Traditionalists acting out The North vs The South or Roundheads vs Cavaliers. My thought was: I don’t get this. Information by country:- Greece Greece's skills snapshot Developing the relevant skills How well does Greece’s education system perform? In the 2009 PISA test of 15-year-olds, Greece performs below the OECD average in reading (rank 32), mathematics (rank 39) and science (rank 40).1How much are Greek citizens undertaking further education? In 2008, only 13% of Greek citizens participated in continuing non-formal education compared to the OECD average of 34%.2How equal is access to opportunities for further training in Greece? In 2007, 32% of people aged 25-64 with a tertiary-level education participated in formal and/or non-formal education, compared with 4% for people in the same age group with below upper secondary education.3Should more be done to prevent skills shortages?

Vygotsky on Collective Creativity Posted by keithsawyer in Everyday life. Tags: Collective creativity, creativity, lev vygotsky, vygotsky, walter isaacson trackback I just re-read a classic article about creativity, written almost 100 years ago by the legendary Russian psychologist Lev Vygotsky. Vygotsky’s theory–that innovations emerge from social networks and collaborative groups–has been supported by decades of research. Here are a few choice quotations: Our everyday understanding of creativity does not fully conform to the scientific understanding of this word.

Learning, Technology and Community: A Journey of the Self Look at how ALT defines itself on its website. It's an identity that's very much at the boundary of different things: technology, but also change management, learning theory, etc. How I (Wenger) came to be known as a social learning theorist: I was a learning technologist, I wrote a book. About a third was about the work of John Seely Brown, who invited me to his institute. It was started with the charter of rethinking learning. ‘To create is to hurt a little’ – a Dutch perspective on creative learning This is a guest blog written by Richard Gerver and Rik Seveke. In a world of growing complexity and accelerating change the creative capacities of people are increasingly important to design our personal and collective lives. If we truly value the development of creativity in our children, we need to redeem ourselves of our addiction to measurable development. In the Netherlands and the United Kingdom there is little doubt of the importance of creativity. The Dutch minister for Education Jet Bussemaker spoke of ‘capabilities for the future’ at a symposium of the Royal Dutch Academy for Science and said: ‘Education as a source of equipment, capabilities as conditions for imagination and the development of creative rebels.’

Key Pedagogic Thinkers - Dave Cormier Introduction/Background Who is Dave? Dave Cormier of the University of Prince Edward Island in Canada is renowned for coining the term MOOC (Massive Open Online Course) and for developing the notion of rhizomatic learning. Using Education to Serve the Individual: A Conversation with Steve Hargadon (Part 2 of 2) We’re not recognizing that there’s something profoundly important in the dialogue around the philosophy of education, rather than the structured reform of it. — Steve Hargadon This is the second part of a two part interview with Steve Hargadon, founder of the Learning Revolution conference series and the Classroom 2.0 social network for educators. In the first post (Thursday February, 5), Steve address our recent interview with Jordan Shapiro, and its vision for creating a better world through the education system. In this post, Steve answers our questions about creating his own ideal, the support of learning cultures with individuals at the heart of them.

Insight: knowledge base for new technology and education The Observatory is intended to highlight evidence in the area of innovation in education, especially: statistics evidence (e.g. Survey of Schools: ICT in Education)evidence from practice (and policy)evidence from research (e.g. literature review on the KeyCoNet project)Findings from surveys of end users in schools. From Andragogy to Heutagogy Author: Stewart Hase and Chris Kenyon (2001) Southern Cross University Keywords: Southern Cross University, pedagogy, andragogy, heutagogy, higher education, vocational education, self-determined learning. Maps of Neolithic, Bronze Age & Iron Age migrations in Europe and the Near East Mesolithic tribes and the origins of agriculture in the Near East (9000-7000 BCE) Click to enlarge. Expansion of agriculture from the Middle East to Europe (9500-3800 BCE)

Teaching and Learning in the Rhizome: challenges and possibilities June 22, 2015 by jennymackness On Thursday 18th June Frances Bell and I presented a session at Liverpool John Moores University’s Teaching and Learning Conference, which earlier in the year put out a call for papers which could address the theme: ‘Locations for learning: where does the learning take place?’ We immediately recognized that our research into rhizomatic learning would fit this theme. The rhizome has been used as a metaphor for teaching and learning by many educators who are interested in encouraging learners to explore new spaces for learning. This is the Abstract we submitted. We can no longer preserve the illusion that learning is bounded by the classroom or other formal educational structures.

Composing and Decomposing Numbers One of the reasons I love teaching math is that it is so much different now than when I was in elementary school (Google paleolithic age for a frame of reference). Take composing and decomposing numbers. I don't remember ever "playing" with numbers. I learned to count, I learned to write my numbers, I learned addition and subtraction facts, but I don't remember ever learning that there are lots of ways to make 5, or any number for that matter. John Van de Walle devotes pages to explaining the importance of composing and decomposing numbers, and parts and wholes (also called part-part-whole) are foundational to Singapore Math. Under a Rock is my take on an activity that is commonly used in classrooms to explore parts and wholes.