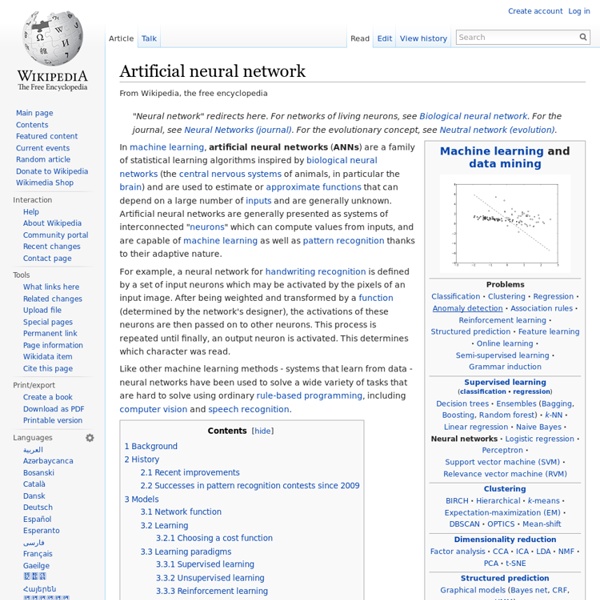 An artificial neural network is an interconnected group of nodes, akin to the vast network of neurons in a brain. Here, each circular node represents an artificial neuron and an arrow represents a connection from the output of one neuron to the input of another. For example, a neural network for handwriting recognition is defined by a set of input neurons which may be activated by the pixels of an input image. After being weighted and transformed by a function (determined by the network's designer), the activations of these neurons are then passed on to other neurons. This process is repeated until finally, an output neuron is activated. This determines which character was read. Like other machine learning methods - systems that learn from data - neural networks have been used to solve a wide variety of tasks that are hard to solve using ordinary rule-based programming, including computer vision and speech recognition. Background[edit] History[edit] Farley and Wesley A. Models[edit] or both

Neural Network Package Torch7 This package provides an easy way to build and train simple or complex neural networks. Each module of a network is composed of Modules and there are several sub-classes of Module available: container classes like Sequential, Parallel and Concat , which can contain simple layers like Linear, Mean, Max and Reshape, as well as convolutional layers, and transfer functions like Tanh. Loss functions are implemented as sub-classes of Criterion.

Dimensionality reduction In machine learning and statistics, dimensionality reduction or dimension reduction is the process of reducing the number of random variables under consideration,[1] and can be divided into feature selection and feature extraction.[2] Feature selection[edit] Feature extraction[edit] The main linear technique for dimensionality reduction, principal component analysis, performs a linear mapping of the data to a lower-dimensional space in such a way that the variance of the data in the low-dimensional representation is maximized. In practice, the correlation matrix of the data is constructed and the eigenvectors on this matrix are computed. The eigenvectors that correspond to the largest eigenvalues (the principal components) can now be used to reconstruct a large fraction of the variance of the original data.

Applications of adaptive systems - Piki From Piki Asking what you can do with adaptive systems such as neural networks is a bit like asking what you can do with computer programming. The answer is the same: more or less anything that deals with information. The B2B2C model Jessica Tayenjam is a consultant at Rapid Innovation Group, where she helps high potential, technology-enabled companies mitigate market risk and create scalable growth. She is one of the speakers at our Startup 101 course on Saturday 9th March (tickets still available – download the free preview book here). Here, she shares her thoughts on the B2B2C model. Many definitions of B2B2C businesses focus on e-commerce relationships where the ‘C’ is the buyer. However, I think there is a more interesting segment of B2B2C: a business selling a product to another business which its customers will engage with.

Social Curation Service Pearltrees Revamps Web and Mobile Apps Pearltrees, the service that allows you to arrange Web content, photos and more (‘pearls’) into mindmap-style ‘trees’, has updated its Web and mobile apps today in order to bring a more seamless user experience and new features to the platform. The company said the Web platform has been fully redesigned and rebuilt in HTML5, making it more easily accessible on a range of different devices, as well as introducing new features also now found in its iOS and Android apps. It seems it’s becoming a bit of a habit for Pearltrees to significantly revamp its website at about this time each year, and this time around it’s gone all-out to make collections, and collecting, “simpler, more accessible and more shareable,” CEO and co-founder Patrice Lamothe said.

Neural Network Tutorial Introduction I have been interested in artificial intelligence and artificial life for years and I read most of the popular books printed on the subject. I developed a grasp of most of the topics yet neural networks always seemed to elude me. Sure, I could explain their architecture but as to how they actually worked and how they were implemented… well that was a complete mystery to me, as much magic as science.