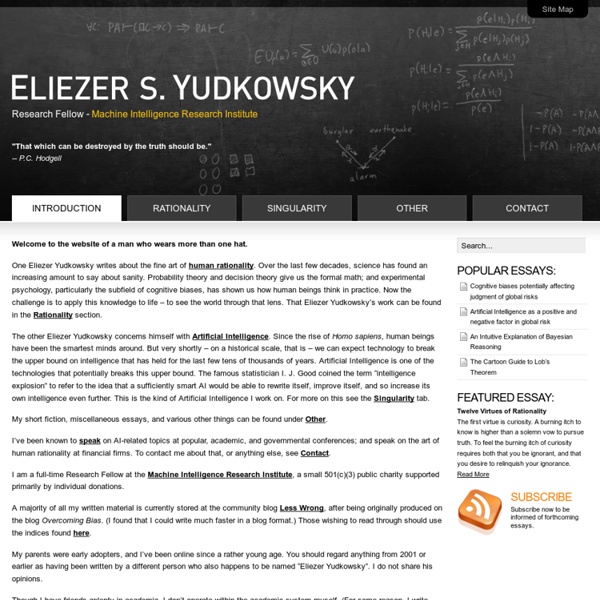 Yehuda Yudkowsky - (Build 20100722150226) Background for non-transhumanists: Transhumanists are not fond of death. We would stop it if we could. Confessions of a Car Salesman - How to Buy a New Car Don't bother dangling that "all cash" offer to a salesman. He doesn't care. We make less money on cash deals. We make more money on the financing and get the money from the bank within the same time-frame. But no matter what the deal looks like, it's the hardcore hagglers that get the best prices. There are definitely those "grinders" that come into the store—people who will keep you in the process, chiseling the price of the car down and asking you to throw in some perks on top of it. Rationality Over the last several decades, science has developed a new picture of how we succeed or fail to seek true beliefs and achieve our goals. The heuristics and biases program in cognitive psychology has exposed dozens of major flaws in human reasoning, and along with them, insight into the mental processes that produce these flaws. Bayesian probability theory and decision theory have been used in increasingly powerful statistical methods and machine learning algorithms; I believe that they also provide a lens through which to view everyday life.

Alvin Toffler Alvin Toffler (born October 4, 1928) is an American writer and futurist, known for his works discussing the digital revolution, communication revolution and technological singularity. He founded Toffler Associates, a management consulting company, and was a visiting scholar at the Russell Sage Foundation, visiting professor at Cornell University, faculty member of the New School for Social Research, a White House correspondent, an editor of Fortune magazine, and a business consultant.[3] Toffler is married to Heidi Toffler, also a writer and futurist. They live in the Bel Air section of Los Angeles, California, just north of Sunset Boulevard. The couple’s only child, Karen Toffler, (1954–2000), died at the age of 46 after more than a decade suffering from Guillain–Barré syndrome.[4][5]

Paul Feyerabend's Against Method Paul Feyerabend (1975) Against Method Outline of an anarchistic theory of knowledge Can 'friendly' AI save humans from irrelevance or extinction? The fate of the human species depends on AI (Artificial Intelligence) entities far smarter than us and who aren't prone to wipe out or enslave us. That is one of the topics to be discussed by luminaries in the AI world at the Singularity Summit 2007 held at the Palace of Fine Arts in San Francisco September 8-9. I spoke with Eliezer Yudkowsky, co-founder of the Singularity Institute for Artificial Intelligence about his idea of Friendly AI and the challenges to achieving self-reflective AI systems far beyond the capacity of human intelligence. It is the stuff of science fiction, yet our ancestors from 10,000 years ago with the same grey matter would have never dreamed of people on the moon or the iPhone. (You can download the podcast here.)

Locksmiths Blog » How to pick a lock with a business card May 4, 2011 Image Source The impressive multi-functional business card you see above belongs to “Melvin,” a hacker who decided some years ago to design a piece of business identification that was both appropriate and unique. He scored on both fronts, but most impressive is the card’s dual purpose: as well as providing contact info for clients, the card can be easily dismantled – each individual tool can be popped out and detached – and cleverly used as a lock-picking kit. It’s a great idea.

Singularity The term “Singularity” had a much narrower meaning back when the Machine Intelligence Research Institute was founded. Since then the term has acquired all sorts of unsavory connotations. The kind of Singularity I work on has little to do with Moore’s Law. So forget the word; here’s the issue: Since the rise of Homo sapiens, human beings have been the smartest minds around.

Singularity Hypotheses: A Scientific and Philosophical Assessment What is the Singularity? Existential risk or cultist fantasy? Rapture of the nerds? Unspeakableness Investigation in Emotion Classification This is the early stage research of the project. In late January, 2012, I emailed around Royal College of Art asking for words describing emotions in languages other than English that are untranslatable into English. Interesting enough, in order to understand the untranslatable words I had to have several correspondence with the person who contributed the word, and through this back-and-forth discussion can I actually get the glimpse of the emotion itself. These explanation of the untranslatable words are often in the format of "it is a kind of (emotion A), close to (emotion B), and somehow between (emotion C) and (emotion D)." This triggers me to map out the emotions based on the classification of emotions provided in Shaver et al. - "Emotion Knowledge - Futher Exploration of a Prototype Approach." in the book Emotions in Social Psychology by W.

Dennis Bray - (Build 20100722150226) Emeritus Professor (active) Tel: +44 (0)1223 333771, Fax: +44 (0)1223 333786, E-mail: db10009@cam.ac.uk Bacterial Chemotaxis: Using Computers to Represent Biology The set of biochemical reactions by which an E. coli bacterium detects and responds to distant sources of attractant or repellent molecules is probably the simplest and best understood example of a cell-signalling pathway. The pathway has been saturated genetically and all of its protein components have been isolated, measured biochemically and their atomic structures determined.

OccupyWriters.com Thirteen Observations made by Lemony Snicket while watching Occupy Wall Street from a Discreet Distance 1. If you work hard, and become successful, it does not necessarily mean you are successful because you worked hard, just as if you are tall with long hair it doesn’t mean you would be a midget if you were bald. 2. 02002-02029 (27 years): By 2029 no computer - or &machine intelligence& - will have passed the Turing Test. - Long Bets - StumbleUpon The Significance of the Turing Test. The implicit, and in my view brilliant, insight in Turing's eponymous test is the ability of written human language to represent human-level thinking. The basis of the Turing test is that if the human Turing test judge is competent, then an entity requires human-level intelligence in order to pass the test. The human judge is free to probe each candidate with regard to their understanding of basic human knowledge, current events, aspects of the candidate's personal history and experiences, as well as their subjective experiences, all expressed through written language.

Singularity Summit at Stanford An Annual Conference onScience, Technology, and the Future The Singularity Summit is an annual conference on science, technology, and the future co-produced by MIRI and Singularity University. Topics explored include artificial intelligence, brain-computer interfaces, the Singularity, robotics, regenerative medicine, and big picture issues on the trajectory of human civilization. Each year, about 25 eminent speakers share their latest views over the course of two days.