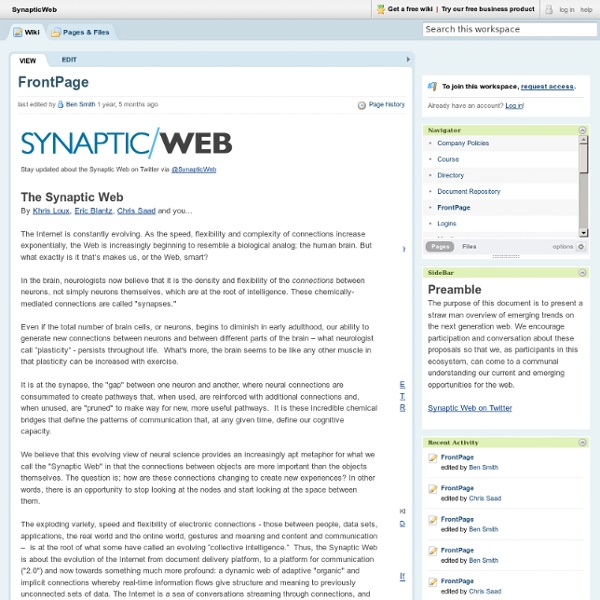 Stay updated about the Synaptic Web on Twitter via @SynapticWeb The Synaptic Web By Khris Loux, Eric Blantz, Chris Saad and you... The Internet is constantly evolving. In the brain, neurologists now believe that it is the density and flexibility of the connections between neurons, not simply neurons themselves, which are at the root of intelligence. Even if the total number of brain cells, or neurons, begins to diminish in early adulthood, our ability to generate new connections between neurons and between different parts of the brain – what neurologist call “plasticity” - persists throughout life. It is at the synapse, the "gap" between one neuron and another, where neural connections are consummated to create pathways that, when used, are reinforced with additional connections and, when unused, are "pruned" to make way for new, more useful pathways. Signs of the emerging Synaptic Web abound. The same is true for Social Networks. Social profiles are becoming real-time streams. Related:  `test 1022 • *

SynapticWeb / FrontPage synaptic web « Collective Web In previous posts, especially in those related to content mapping, I frequently referred to collective actions and efforts in describing certain concepts, but never elaborated on the exact meaning of these terms. One could think that collectivity and collaboration are identical (they often are mentioned in the same context) as both have something to do with individuals working together. In fact, I find it important to highlight their differences for I expect collectivity to play as vital a role in Web 3.0 as collaboration did in Web 2.0. Transition As already understood from popular Web 2.0 applications such as Wikipedia, Google Docs, or WordPress, we define collaboration as sharing workload in a group of individuals who engage in a complex task, working towards a common goal in a managed fashion, and are conscious of the process’ details all the way. Different realms Collaboration and collectivity operate in different realms. The synaptic web Hence the synaptic web calls for collectivity.

Twitter is closer to emulate a Neural Network than Facebook When we think of Twitter and the innovation behind it, the first thing we all think is 140. 140 characters is without a doubt an amazing innovation that Twitter introduced which makes communication flow faster, forces twitters to summarize a piece of news or information, or an idea or an opinion and allows followers to get information or an idea faster as well. Also, after the introduction of url shorteners (tinyurl,com originally and many others later on such as bit.ly) an emergent property of Twitter came to life: the linked web. Any blog post or news article out there could be potentially linked multiple times in Twitter with quick summaries and opinions. Other emerging properties or elements in Twitter are:. There is one more original Twitter property we don't hear much about and I believe it's a key element to the Twitter success. When you look at a Neural Network, you'll find that it is also an Asymmetric Network.

DARPA SyNAPSE Program Last updated: Jan 11, 2013 SyNAPSE is a DARPA-funded program to develop electronic neuromorphic machine technology that scales to biological levels. More simply stated, it is an attempt to build a new kind of computer with similar form and function to the mammalian brain. Such artificial brains would be used to build robots whose intelligence matches that of mice and cats. SyNAPSE is a backronym standing for Systems of Neuromorphic Adaptive Plastic Scalable Electronics. It started in 2008 and as of January 2013 has received $102.6 million in funding. The ultimate aim is to build an electronic microprocessor system that matches a mammalian brain in function, size, and power consumption. Latest news As of January 2013 the program is currently progressing through phase 2, the third of five phases. Background The following text is taken from the Broad Agency Announcement (BAA) published by DARPA in April 2008 (see the original document): Project phases No phase should last more than 18 months.

Announcing Echo StreamServer, AppStore 02.08.2011– SAN FRANCISCO—Echo (www.aboutecho.com) today launched StreamServer, a new cloud platform that gives media companies, brands and startups the power to aggregate and control content and activity from their site, social networks, applications and more into one real-time database. Echo unveiled the new platform this morning before a large audience at the San Francisco Museum of Modern Art alongside NBC, Reuters, Sports Illustrated, Interscope, and other customers already working with the new service. Like never before, the Internet is awash with activity information. Those that have determined how to capture this data and create highly relevant social experiences have prospered. They are now household brand names. In response, many have tried to integrate simple Facebook, Twitter and other social media point solutions into their sites — but point solutions are not enough. Given the power but elusive nature of social media, today’s brands want: Control of the user experience

Basics of Attention Profiling through APML at CleverClogs “If you want to inform yourself of the basic principles of attention profiling or need to explain the concept to others then please read on. Feel free to add your clarifications, your conclusions and your constructive criticism to this deliberately non-geek conversation.” In recent months quite a few bloggers covered the growing adoption of APML, a proposed standard for attention profiling. What is attention profiling and what are the benefits? As usual, this post concludes with a news radar. I encourage you to participate in this deliberately non-geek conversation about attention profiling, either by posting a comment or by writing a blog post of your own. Attention Profiling I like introducing attention profiles as consolidated, structured descriptions of people’s interests and dislikes. In today’s post I confine myself to describe services that are capable of handling attention profiles based on the proposed APML standard. I strongly suggest you read Emily’s post in full.

Ontology of Folksonomy Thomas Gruber TomGruber.org and RealTravel.com Published in Int’l Journal on Semantic Web & Information Systems, 3(2), 2007. Ontologies are enabling technology for the Semantic Web. A while ago, the Artificial Intelligence research community got together to find a way to “enable knowledge sharing” (Neches et al., 1991). In the context of the Semantic Web, “ontology” is an enabling technology — a layer of the enabling infrastructure — for information sharing and manipulation. Not so long ago, keen observers of the Internet (Vander Wal, 2004),(Sterling, 2005), (Mieszkowski, 2005) and inventors of social software (Shachter, 2003), (Fake and Butterfield, 2003) began to notice that people who don’t write computer programs were happily “tagging” with keywords the content they created or encountered. Like all vague but evocative terms, both of the words ontology and folksonomy have taken on many senses. Yes, we agree, tags are cool. How to proceed? Let us focus on the ontology layer here.