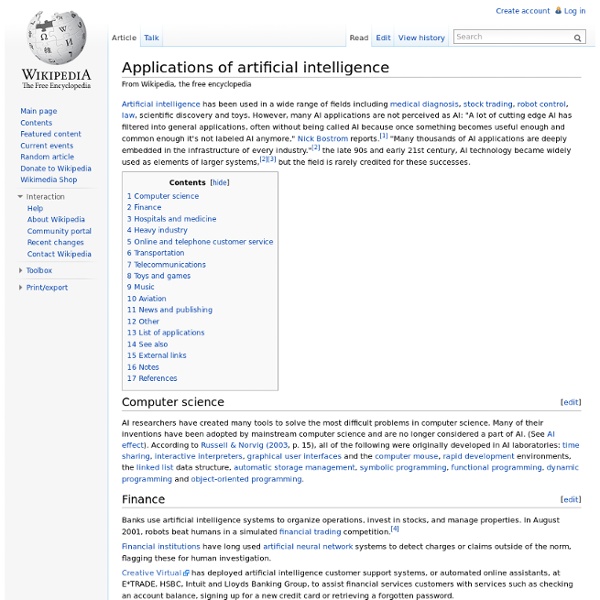 Artificial intelligence has been used in a wide range of fields including medical diagnosis, stock trading, robot control, law, remote sensing, scientific discovery and toys. However, many AI applications are not perceived as AI: "A lot of cutting edge AI has filtered into general applications, often without being called AI because once something becomes useful enough and common enough it's not labeled AI anymore," Nick Bostrom reports.[1] "Many thousands of AI applications are deeply embedded in the infrastructure of every industry." In the late 90s and early 21st century, AI technology became widely used as elements of larger systems, but the field is rarely credited for these successes. Computer science[edit] AI researchers have created many tools to solve the most difficult problems in computer science. Many of their inventions have been adopted by mainstream computer science and are no longer considered a part of AI. Finance[edit] Hospitals and medicine[edit] Heavy industry[edit] Related:  Artificial Intelligence • Saved Wiki

Knowledge engineering Knowledge engineering (KE) was defined in 1983 by Edward Feigenbaum, and Pamela McCorduck as follows: KE is an engineering discipline that involves integrating knowledge into computer systems in order to solve complex problems normally requiring a high level of human expertise.[1] It is used in many computer science domains such as artificial intelligence,[2][3] including databases, data mining, bioinformatics, expert systems, decision support systems and geographic information systems. Various activities of KE specific for the development of a knowledge-based system: Assessment of the problemDevelopment of a knowledge-based system shell/structureAcquisition and structuring of the related information, knowledge and specific preferences (IPK model)Implementation of the structured knowledge into knowledge basesTesting and validation of the inserted knowledgeIntegration and maintenance of the systemRevision and evaluation of the system. Knowledge engineering principles[edit] Bibliography[edit]

Araucaria (software) The user interface is composed of a main window (diagramming), a schemes editor and the AraucariaDB online interface. While Araucaria helps identify the structure of an argument, it provides freedom of analysis resources. The scheme editor allows the user to create argumentation schemes, group them together and save them into a scheme set file. The AraucariaDB Online Repository can be browsed to retrieve specific arguments to fit a diagram. Because it is based on XML, a standard widely used by developers, AML content can be accessed through other software that support XML.

Our Fear of Artificial Intelligence Years ago I had coffee with a friend who ran a startup. He had just turned 40. His father was ill, his back was sore, and he found himself overwhelmed by life. “Don’t laugh at me,” he said, “but I was counting on the singularity.” My friend worked in technology; he’d seen the changes that faster microprocessors and networks had wrought. But what if it wasn’t so benevolent? No worries, you might say: you could just program it to make exactly a million paper clips and halt. Things Reviewed “Superintelligence: Paths, Dangers, Strategies” By Nick Bostrom Oxford University Press, 2014 Bostrom does not believe that the paper-clip maximizer will come to be, exactly; it’s a thought experiment, one designed to show how even careful system design can fail to restrain extreme machine intelligence. If this sounds absurd to you, you’re not alone. Yet a lot of smart, thoughtful people agree with Bostrom and are worried now. Volition The question “Can a machine think?” Insurance policy

Redwood Center for Theoretical Neuroscience Artificial intelligence AI research is highly technical and specialized, and is deeply divided into subfields that often fail to communicate with each other.[5] Some of the division is due to social and cultural factors: subfields have grown up around particular institutions and the work of individual researchers. AI research is also divided by several technical issues. Some subfields focus on the solution of specific problems. The central problems (or goals) of AI research include reasoning, knowledge, planning, learning, natural language processing (communication), perception and the ability to move and manipulate objects.[6] General intelligence is still among the field's long-term goals.[7] Currently popular approaches include statistical methods, computational intelligence and traditional symbolic AI. The field was founded on the claim that a central property of humans, intelligence—the sapience of Homo sapiens—"can be so precisely described that a machine can be made to simulate it History[edit]

AI effect The AI effect occurs when onlookers discount the behavior of an artificial intelligence program by arguing that it is not real intelligence. Pamela McCorduck writes: "It's part of the history of the field of artificial intelligence that every time somebody figured out how to make a computer do something—play good checkers, solve simple but relatively informal problems—there was chorus of critics to say, 'that's not thinking'."[1] AI researcher Rodney Brooks complains "Every time we figure out a piece of it, it stops being magical; we say, Oh, that's just a computation. AI is whatever hasn't been done yet[edit] As soon as AI successfully solves a problem, the problem is no longer a part of AI. Douglas Hofstadter expresses the AI effect concisely by quoting Tesler's Theorem: "AI is whatever hasn't been done yet When problems have not yet been formalised, they can still be characterised by a model of computation that includes human computation. AI applications become mainstream[edit]

Argument map A schematic argument map showing a contention (or conclusion), supporting arguments and objections, and an inference objection. Argument maps are commonly used in the context of teaching and applying critical thinking.[2] The purpose of mapping is to uncover the logical structure of arguments, identify unstated assumptions, evaluate the support an argument offers for a conclusion, and aid understanding of debates. Argument maps are often designed to support deliberation of issues, ideas and arguments in wicked problems.[3] Key features[edit] A number of different kinds of argument map have been proposed but the most common, which Chris Reed and Glenn Rowe called the standard diagram,[5] consists of a tree structure with each of the reasons leading to the conclusion. According to Doug Walton and colleagues, an argument map has two basic components: "One component is a set of circled numbers arrayed as points. Statements 1 and 2 are dependent premises or co-premises History[edit] Notes[edit]