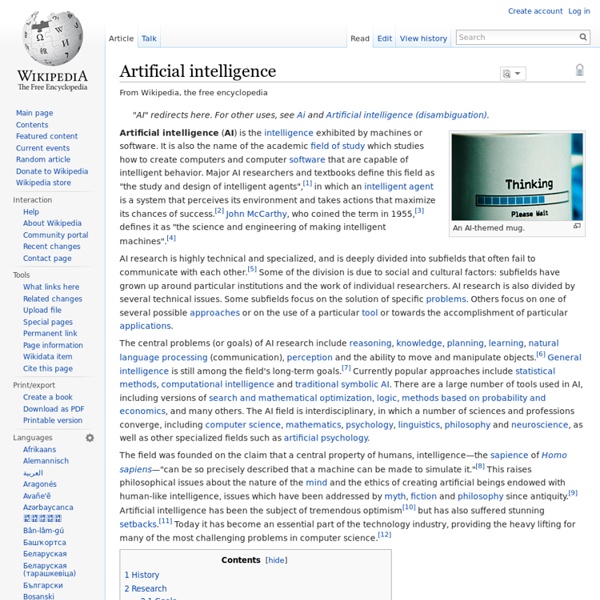 AI research is highly technical and specialized, and is deeply divided into subfields that often fail to communicate with each other.[5] Some of the division is due to social and cultural factors: subfields have grown up around particular institutions and the work of individual researchers. AI research is also divided by several technical issues. Some subfields focus on the solution of specific problems. Others focus on one of several possible approaches or on the use of a particular tool or towards the accomplishment of particular applications. The central problems (or goals) of AI research include reasoning, knowledge, planning, learning, natural language processing (communication), perception and the ability to move and manipulate objects.[6] General intelligence is still among the field's long-term goals.[7] Currently popular approaches include statistical methods, computational intelligence and traditional symbolic AI. History[edit] Research[edit] Goals[edit] Planning[edit] Logic-based

AI Gaydar and Other Stories of the Death of Ignorance After the fall of the Berlin Wall, East German citizens were offered the chance to read the files kept on them by the Stasi, the much-feared Communist-era secret police service. To date, it is estimated that only 10 percent have taken the opportunity. In 2007, James Watson, the co-discoverer of the structure of DNA, asked that he not be given any information about his APOE gene, one allele of which is a known risk factor for Alzheimer’s disease. Most people tell pollsters that, given the choice, they would prefer not to know the date of their own death—or even the future dates of happy events. Each of these is an example of willful ignorance.

Novel Finding: Reading Literary Fiction Improves Empathy How important is reading fiction in socializing school children? Researchers at The New School in New York City have found evidence that literary fiction improves a reader’s capacity to understand what others are thinking and feeling. Emanuele Castano, a social psychologist, along with PhD candidate David Kidd conducted five studies in which they divided a varying number of participants (ranging from 86 to 356) and gave them different reading assignments: excerpts from genre (or popular) fiction, literary fiction, nonfiction or nothing. After they finished the excerpts the participants took a test that measured their ability to infer and understand other people’s thoughts and emotions. The researchers found, to their surprise, a significant difference between the literary- and genre-fiction readers.

How Robots Work" On the most basic level, human beings are made up of five major components: A body structureA muscle system to move the body structureA sensory system that receives information about the body and the surrounding environmentA power source to activate the muscles and sensorsA brain system that processes sensory information and tells the muscles what to do Of course, we also have some intangible attributes, such as intelligence and morality, but on the sheer physical level, the list above about covers it. A robot is made up of the very same components.

Applications of artificial intelligence Artificial intelligence has been used in a wide range of fields including medical diagnosis, stock trading, robot control, law, remote sensing, scientific discovery and toys. However, many AI applications are not perceived as AI: "A lot of cutting edge AI has filtered into general applications, often without being called AI because once something becomes useful enough and common enough it's not labeled AI anymore," Nick Bostrom reports.[1] "Many thousands of AI applications are deeply embedded in the infrastructure of every industry." In the late 90s and early 21st century, AI technology became widely used as elements of larger systems, but the field is rarely credited for these successes. Computer science[edit] AI researchers have created many tools to solve the most difficult problems in computer science.

singular hubbing Udacity gives students videos that they can watch at their own pace and be continually quizzed on. This past August fellow Singularity Hub writer Aaron Saenz wrote about Udacity, the online university created by Stanford artificial intelligence professor and Google autonomous vehicle leader, Sebastian Thrun. At the time Thrun was gearing up to teach his Introduction to Artificial Intelligence course to a class of 200 at Stanford. But why teach 200 when you can teach 1,000…or 160,000? With Udacity, Thrun and fellow AI giant Peter Norvig created an online version of the course, and anyone that wanted to enroll could – for free.

Banking and financial services: New technology solves GDPR Data privacy is driving the European Union’s General Data Protection Regulations (GDPR) in the UK, and yet it’s widely felt that banks and other financial services institutions have run out of time to find ways to comply with the requirements. Looming on the horizon for failing to comply is a dark cloud of significant financial penalties. Banking and financial services: New technology solves GDPR Ashton Young, writing for Data Centre News on 26th July 2017 in his article ‘Majority of Organisations Think They’re GPDR Compliant Actually Aren’t’, says a global study by Veritas says the fines that could be imposed for non-compliance could be up 4 percent of global annual turnover or 20 million euros – whatever is the greater – writes Graham Jarvis, Business and Technology Journalist.

Worried Sick Something strange was happening in New Zealand. In the fall of 2007, pharmacies across the country had begun dispensing a new formulation of Eltroxin—the only thyroid hormone replacement drug approved and paid for by the government and used by tens of thousands of New Zealanders since 1973. Within months, reports of side effects began trickling in to the government’s health-care monitoring agency. These included known side effects of the drug, such as lethargy, joint pain, and depression, as well as symptoms not normally associated with the drug or disease, including eye pain, itching, and nausea. Then, the following summer, the floodgates opened: in the 18 months following the release of the new tablets, the rate of Eltroxin adverse event reporting rose nearly 2,000-fold.1

Luigi Luigi first appeared in the 1983 arcade game Mario Bros. as the character controlled by the second player, and retained this role in Super Mario Bros., Super Mario Bros. 3, Super Mario World, and other titles. The first game where he was available as a primary character was Super Mario Bros. 2. In more recent appearances, Luigi's role became increasingly restricted to spinoffs such as the Mario Party and Mario Kart series, though he has been featured in a starring role on three occasions: first in the 1991 educational game Mario is Missing, in Luigi's Mansion for the Nintendo GameCube in 2001, and in Luigi's Mansion: Dark Moon for the 3DS. In all three of these games, he is called upon to act as the hero because Mario, the usual hero within the franchise, is in need of rescue.