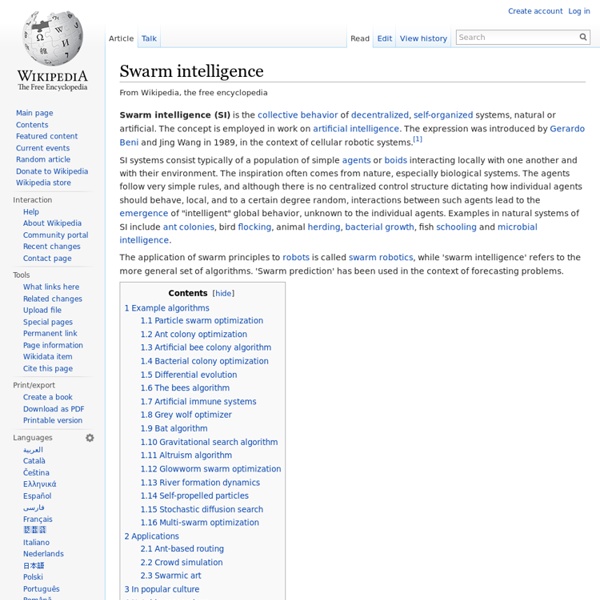 Swarm intelligence (SI) is the collective behavior of decentralized, self-organized systems, natural or artificial. The concept is employed in work on artificial intelligence. The expression was introduced by Gerardo Beni and Jing Wang in 1989, in the context of cellular robotic systems.[1] The application of swarm principles to robots is called swarm robotics, while 'swarm intelligence' refers to the more general set of algorithms. Example algorithms[edit] Particle swarm optimization[edit] Ant colony optimization[edit] Artificial bee colony algorithm[edit] Artificial bee colony algorithm (ABC) is a meta-heuristic algorithm introduced by Karaboga in 2005,[5] and simulates the foraging behaviour of honey bees. Bacterial colony optimization[edit] The algorithm is based on a lifecycle model that simulates some typical behaviors of E. coli bacteria during their whole lifecycle, including chemotaxis, communication, elimination, reproduction, and migration.[6] Differential evolution[edit]

The Wisdom of Crowds The Wisdom of Crowds: Why the Many Are Smarter Than the Few and How Collective Wisdom Shapes Business, Economies, Societies and Nations, published in 2004, is a book written by James Surowiecki about the aggregation of information in groups, resulting in decisions that, he argues, are often better than could have been made by any single member of the group. The book presents numerous case studies and anecdotes to illustrate its argument, and touches on several fields, primarily economics and psychology. The opening anecdote relates Francis Galton's surprise that the crowd at a county fair accurately guessed the weight of an ox when their individual guesses were averaged (the average was closer to the ox's true butchered weight than the estimates of most crowd members, and also closer than any of the separate estimates made by cattle experts).[1] Types of crowd wisdom[edit] Surowiecki breaks down the advantages he sees in disorganized decisions into three main types, which he classifies as

Craig Reynolds (computer graphics) Craig W. Reynolds (born March 15, 1953), is an artificial life and computer graphics expert, who created the Boids artificial life simulation in 1986.[1] Reynolds worked on the film Tron (1982) as a scene programmer, and on Batman Returns (1992) as part of the video image crew. Reynolds won the 1998 Academy Scientific and Technical Award in recognition of "his pioneering contributions to the development of three-dimensional computer animation for motion picture production.

Boids As with most artificial life simulations, Boids is an example of emergent behavior; that is, the complexity of Boids arises from the interaction of individual agents (the boids, in this case) adhering to a set of simple rules. The rules applied in the simplest Boids world are as follows: separation: steer to avoid crowding local flockmatesalignment: steer towards the average heading of local flockmatescohesion: steer to move toward the average position (center of mass) of local flockmates More complex rules can be added, such as obstacle avoidance and goal seeking. The basic model has been extended in several different ways since Reynolds proposed it. For instance, Delgado-Mata et al.[3] extended the basic model to incorporate the effects of fear. The movement of Boids can be characterized as either chaotic (splitting groups and wild behaviour) or orderly. The boids model has been used for other interesting applications. See also[edit] Swarm intelligence References[edit] External links[edit]

Extraordinary Popular Delusions and the Madness of Crowds A satirical "Bubble card" An Alchemist "Witch Hunter", Matthew Hopkins The Cock Lane "ghost" Extraordinary Popular Delusions and the Madness of Crowds is a history of popular folly by Scottish journalist Charles Mackay, first published in 1841. In later editions Mackay added a footnote referencing the Railway Mania of the 1840s as another "popular delusion", of importance at least comparable with the South Sea Bubble. Volume I[edit] Economic bubbles[edit] Among the bubbles or financial manias described by Mackay are the South Sea Company bubble of 1711–1720, the Mississippi Company bubble of 1719–1720, and the Dutch tulip mania of the early seventeenth century. Two modern researchers, Peter Garber and Anne Goldgar, independently conclude that Mackay greatly exaggerated the scale and effects of the Tulip bubble,[6] and Mike Dash, in a footnote to his modern popular history of the alleged bubble states that he believes the importance and extent of the tulip mania was overstated.[7] Notes