Networks, Crowds, and Markets: A Book by David Easley and Jon Kleinberg 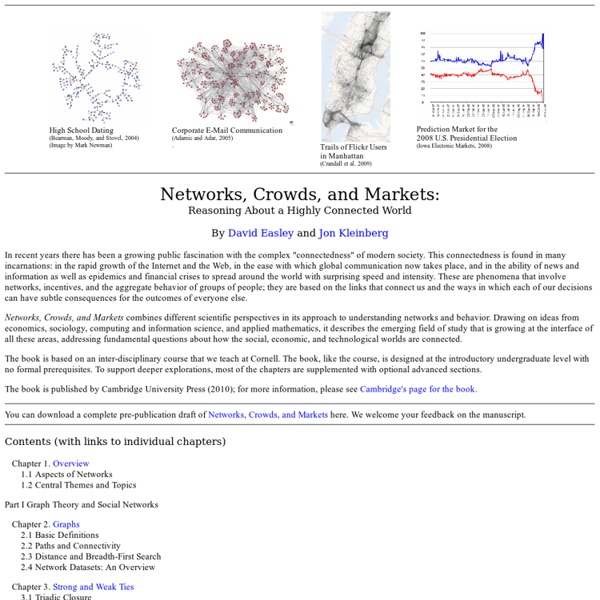 In recent years there has been a growing public fascination with the complex "connectedness" of modern society. This connectedness is found in many incarnations: in the rapid growth of the Internet and the Web, in the ease with which global communication now takes place, and in the ability of news and information as well as epidemics and financial crises to spread around the world with surprising speed and intensity. These are phenomena that involve networks, incentives, and the aggregate behavior of groups of people; they are based on the links that connect us and the ways in which each of our decisions can have subtle consequences for the outcomes of everyone else. Networks, Crowds, and Markets combines different scientific perspectives in its approach to understanding networks and behavior. The book is based on an inter-disciplinary course that we teach at Cornell. The book, like the course, is designed at the introductory undergraduate level with no formal prerequisites.

Introduction to Computer Science Class Online (CS101) When does the course begin? This class is self paced. You can begin whenever you like and then follow your own pace. Creating a graph — NetworkX 1.7 documentation Start here to begin working with NetworkX. Create an empty graph with no nodes and no edges. >>> import networkx as nx>>> G=nx.Graph() By definition, a Graph is a collection of nodes (vertices) along with identified pairs of nodes (called edges, links, etc). In NetworkX, nodes can be any hashable object e.g. a text string, an image, an XML object, another Graph, a customized node object, etc.

Steffen Wischmann - Research Social behavior can be found on almost every level of life, ranging from microorganisms to human societies. However, explaining the evolutionary emergence of cooperation, communication, or competition still challenges modern biology. The most common approaches to this problem are based on game-theoretic models. Motor cognition The concept of motor cognition grasps the notion that cognition is embodied in action, and that the motor system participates in what is usually considered as mental processing, including those involved in social interaction.[1] The fundamental unit of the motor cognition paradigm is action, defined as the movements produced to satisfy an intention towards a specific motor goal, or in reaction to a meaningful event in the physical and social environments. Motor cognition takes into account the preparation and production of actions, as well as the processes involved in recognizing, predicting, mimicking and understanding the behavior of other people. This paradigm has received a great deal of attention and empirical support in recents years from a variety of research domains including developmental psychology, cognitive neuroscience, and social psychology. Perception-action coupling[edit] Shared representations between other and self[edit]

several dots on a map « …and then the world 2010 is already looking like it’ll be fairly busy, not least because nearly a quarter of it is gone already. Over the next twelve months, I should finish my thesis, while other projects are also being developed and carried out: I’m tutoring in a first-year unit this semester, and am currently writing up new work on the French political blog research, first outlined at IR10 last year, for both my thesis and a conference presentation. That presentation will be in June, at the International Communication Association conference in Singapore, as a paper co-authored with Lars Kirchhoff and Thomas Nicolai from Sociomantic Labs in Germany. Where my IR10 presentation looked at the text content of blog posts, this paper will be covering the links being made, in their various guises. [Because I was using a slightly older version of Gephi, I was also converting the spreadsheet into Pajek's .net format in order to import it into Gephi using Excel 2 Pajek.

Zachman Framework The Zachman Framework of enterprise architecture The Zachman Framework is not a methodology in that it does not imply any specific method or process for collecting, managing, or using the information that it describes.;[2] rather, it is an Ontology whereby a schema for organizing architectural artifacts (in other words, design documents, specifications, and models) is used to take into account both whom the artifact targets (for example, business owner and builder) and what particular issue (for example, data and functionality) is being addressed.[3] The framework is named after its creator John Zachman, who first developed the concept in the 1980s at IBM.

OpenClassroom Full courses. Short Videos. Free for everyone. Learn the fundamentals of human-computer interaction and design thinking, with an emphasis on mobile web applications. A practical introduction to Unix and command line utilities with a focus on Linux. Introduction to fundamental techniques for designing and analyzing algorithms, including asymptotic analysis; divide-and-conquer algorithms and recurrences; greedy algorithms; data structures; dynamic programming; graph algorithms; and randomized algorithms. Using Netvizz & Gephi to Analyze a Facebook Network « persuasion This post was originally featured on published on May 6th, 2010. Since the website will be relaunched and the post removed, I have relocated the tutorial to my personal page so that the Gephi community can continue to benefit from it. If a picture is worth a thousand words, then a graph must be worth a thousand spreadsheet rows, right?

Lynn Margulis and Dorion Sagan - Microbial Microcosm Just how interconnected are we? The work of biologist Lynn Margulis and writer Dorion Sagan indicates we’re interconnected in ways few of us have probably ever considered. In fact, instead of viewing ourselves as the pinnacle of evolution, it may be more accurate to think of ourselves as a colony of closely associated bacteria. Carla Cole based the following on the work of Lynn Margulis and Dorion Sagan, including an article of theirs, The Parts: Power to the Protoctists, which appeared in the September/October 1992 issue of Earthwatch. (See the sidebar for more information on their work.)

Mimivirus Mimivirus is a viral genus containing a single identified species named Acanthamoeba polyphaga mimivirus (APMV). It also refers to a group of phylogenetically related large viruses, designated usually "MimiN. ISSS paper - 1999 This paper brought together a number of subjects, in an early, almost extended outline. The sections of this paper provide starting positions for several subjects that will be further explored in enterprisography. Full paper can be downloaded from here.