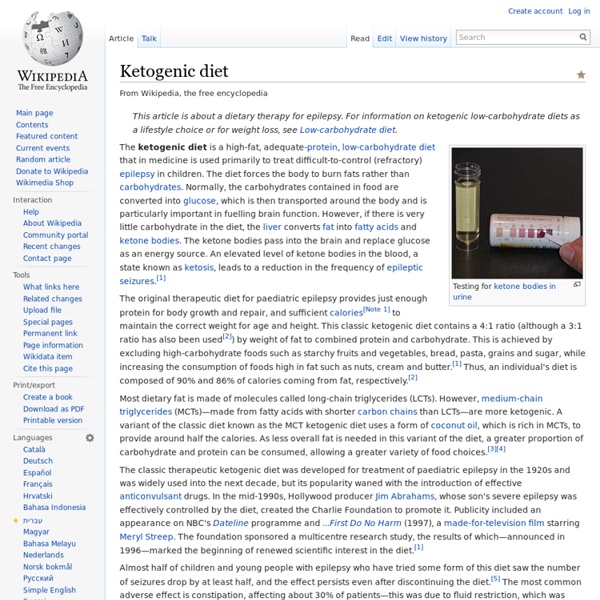 This article is about a dietary therapy for epilepsy. For information on ketogenic low-carbohydrate diets as a lifestyle choice or for weight loss, see Low-carbohydrate diet. The ketogenic diet is a high-fat, adequate-protein, low-carbohydrate diet that in medicine is used primarily to treat difficult-to-control (refractory) epilepsy in children. The original therapeutic diet for paediatric epilepsy provides just enough protein for body growth and repair, and sufficient calories[Note 1] to maintain the correct weight for age and height. Most dietary fat is made of molecules called long-chain triglycerides (LCTs). The classic therapeutic ketogenic diet was developed for treatment of paediatric epilepsy in the 1920s and was widely used into the next decade, but its popularity waned with the introduction of effective anticonvulsant drugs. Epilepsy[edit] History[edit] Fasting[edit] A news report of Dr Hugh Conklin's "water diet" treatment from 1922 Diet[edit] Anticonvulsants and decline[edit] Related:  The diet debate

Deep brain stimulation Deep brain stimulation (DBS) is a surgical treatment involving the implantation of a medical device called a brain pacemaker, which sends electrical impulses to specific parts of the brain. DBS in select brain regions has provided therapeutic benefits for otherwise-treatment-resistant movement and affective disorders such as Parkinson's disease, essential tremor, dystonia, and chronic pain.[1] Despite the long history of DBS,[2] its underlying principles and mechanisms are still not clear.[3][4] DBS directly changes brain activity in a controlled manner, its effects are reversible (unlike those of lesioning techniques), and it is one of only a few neurosurgical methods that allow blinded studies.[citation needed] Components and placement[edit] All three components are surgically implanted inside the body. Applications[edit] Parkinson's disease[edit] Chronic pain[edit] Major depression[edit] Tourette syndrome[edit] The procedure is invasive and expensive, and requires long-term expert care.

Anti-Inflammatory Diet Courtesy of Dr. Weil on Healthy Aging, Your Online Guide to the Anti-Inflammatory Diet. It is becoming increasingly clear that chronic inflammation is the root cause of many serious illnesses - including heart disease, many cancers, and Alzheimer's disease. The Anti-Inflammatory Diet is not a diet in the popular sense - it is not intended as a weight-loss program (although people can and do lose weight on it), nor is the Anti-Inflammatory Diet an eating plan to stay on for a limited period of time. You can also adapt your existing recipes according to these anti-inflammatory diet principles: General Diet Tips: Aim for variety.Include as much fresh food as possible.Minimize your consumption of processed foods and fast food.Eat an abundance of fruits and vegetables. Caloric Intake Carbohydrates Fat On a 2,000-calorie-a-day diet, 600 calories can come from fat - that is, about 67 grams. Protein On a 2,000-calorie-a-day diet, your daily intake of protein should be between 80 and 120 grams. Fiber

Brodmann area 25 Sagittal MRI slice with highlighting indicating location of the subgenual anterior cingulate cortex. Brodmann area 25 (BA25) is an area in the cerebral cortex of the brain and delineated based on its cytoarchitectonic characteristics. It is also called the subgenual area, area subgenualis or subgenual cingulate. History[edit] Brodmann described this area as it is labeled now in 1909. Function[edit] This region is extremely rich in serotonin transporters and is considered as a governor for a vast network involving areas like hypothalamus and brain stem, which influences changes in appetite and sleep; the amygdala and insula, which affect the mood and anxiety; the hippocampus, which plays an important role in memory formation; and some parts of the frontal cortex responsible for self-esteem.[3] This region is particularly implicated in the normal processing of sadness.[4][5] Involvement in depression[edit] In 2005 Helen S. Image[edit] See also[edit] Notes and references[edit]

Enviromedica by Lau'ana Lei There are two main approaches to healing disease from a holistic perspective. These are, first, detoxification and second, immune system improvement. Magnetic Clay Baths are excellent for detoxification. They pull from the body metals and chemicals, which inhibit immune function. But detoxification is only half the solution. When the body is terribly compromised from metals and chemicals, it is difficult to clear out all toxins. THE CORRELATION OF THE pH FACTOR AND LEAKY GUT SYNDROME IN RELATION TO CHRONIC DISEASE The imbalance of pH, acidity and alkalinity in the body, is a key factor in chronic illness. Leaky gut syndrome is an advanced stage of toxicity characterized by lesions in the walls of the intestinal system, which allow toxins to be reabsorbed into the body instead of being eliminated through the normal procedure. A visual analogy helps here. PROGRAMS FOR HELPING THE LEAKY GUT, BALANCING THE pH AND IMPROVING CELLULAR NUTRITION NICKEL: Poppy seeds.

Anterograde amnesia Anterograde amnesia is a loss of the ability to create new memories after the event that caused the amnesia, leading to a partial or complete inability to recall the recent past, while long-term memories from before the event remain intact. This is in contrast to retrograde amnesia, where most memories created prior to the event are lost while new memories can still be created. Both can occur together in the same patient. To a large degree, anterograde amnesia remains a mysterious ailment because the precise mechanism of storing memories is not yet well understood, although it is known that the regions involved are certain sites in the temporal cortex, especially in the hippocampus and nearby subcortical regions. Causes[edit] This disorder is usually acquired in one of few ways: One cause is benzodiazepine drugs, such as midazolam, flunitrazepam, lorazepam, temazepam, nitrazepam, triazolam, and nimetazepam, which are known to have powerful amnesic effects. Alcohol intoxication[edit]

Dr. Sebi: The Man Who Cures AIDS, Cancer, Diabetes and More By Carolanne Wright Contributing Writer for Wake Up World Editor’s note, 7th of August 2016: We are sad to report that Dr. Sebi died yesterday while imprisoned in Honduras. He was 82 years old. To read about the circumstances surrounding his death, as well as tributes to his life and work, please read the article Dr. Meet Dr. Standing Up to the Food and Drug Administration Back in the 1980’s, Dr. The judge presiding over the case requested that Dr. Even with his outstanding victory in court, along with testimonials from celebrities and a multitude of people cured by his method, Dr. The basis behind Dr. “Our research reveals that all manifestation of disease finds it genesis when and where the mucous membrane has been compromised. Moreover, mucous in the retina of the eye will cause blindness; if it is found around the thyroid gland, cancer of the thyroid is the result. According to Dr. You may have guessed by this point that consuming an alkaline diet is key. Vegetables Fruits Herbal Teas

Vagus nerve stimulation Vagus nerve stimulation (VNS) is an adjunctive treatment for certain types of intractable epilepsy and treatment-resistant depression. Mechanism of action[edit] Vagus, the tenth cranial nerve, arises from the medulla and carries both afferent and efferent fibers. The afferent vagal fibers connect to the nucleus of the solitary tract which in turn projects connections to other locations in the central nervous system. Little is understood about exactly how vagal nerve stimulation modulates mood and seizure control but proposed mechanisms include alteration of norepinephrine release by projections of solitary tract to the locus coeruleus, elevated levels of inhibitory GABA related to vagal stimulation and inhibition of aberrant cortical activity by reticular system activation.[1] Approval and endorsement[edit] In 1997, the United States Food and Drug Administration (FDA) approved the use of VNS as an adjunctive therapy for partial-onset epilepsy. Patients[edit] Charles E. Other uses[edit]

Peace through a Sattvic Diet | General | Body A Life Enhancing Diet to Balance the Mind "Food is a dynamic force which interacts with the human on the physical body level, the mind emotional level, and also the energetic and spiritual level. The study of nutrition is the study of the interaction with and assimilation of the dynamic forces of food by the dynamic forces of our total being." ~ Gabriel Cousens, M.D., Spiritual Nutrition and The Rainbow Diet? In Ayurveda the emphasize is on a Sattvic diet for healthy living, particularly for keeping our minds clear, happy and at peace. The original Sattvic diet was devised for the development of higher consciousness. The ancient Ayurvedic criteria for foods to be considered Sattvic were quite simple: foods were grown organically on good rich fertile soil; foods were to be of attractive appearance, and be harvested at the correct time of year. Today, we need to add to these criteria for Sattva several other modern concerns. The Three Gunas Ayurvedic Principles Tamasic Foods Dark, and dull.

Hippocampus MRI coronal view of a hippocampus shown in red The hippocampus (named after its resemblance to the seahorse, from the Greek hippos meaning "horse" and kampos meaning "sea monster") is a major component of the brains of humans and other vertebrates. It belongs to the limbic system and plays important roles in the consolidation of information from short-term memory to long-term memory and spatial navigation. Humans and other mammals have two hippocampi, one in each side of the brain. In rodents, the hippocampus has been studied extensively as part of a brain system responsible for spatial memory and navigation. Since different neuronal cell types are neatly organized into layers in the hippocampus, it has frequently been used as a model system for studying neurophysiology. Name[edit] The human hippocampus and fornix compared with a seahorse (preparation by László Seress in 1980) Functions[edit] Hippocampus (animation) The second major line of thought relates the hippocampus to memory.

Blood Types & Evolution © Geraldo Fuentes for viewzone Blood Types & Different DiseasesAre You At Risk? It is theorized that the original blood type for early primates was type O. DNA retrieved from two Neandertal skeletons showed no A or B antibodies and projected the origin of type O to one million years ago.[1] "The results however suggest the presence of the human O01 allele already in the common ancestor of Neandertals and modern humans and thereby confirming an emergence of the O01 allele more than 1 million years ago predating the divergence of the modern human and Neandertal populations." DNA from Cro-Magnon and chimpanzie specimens showed type O and A, a mutation that proved adventageous because of some environmental challenges or infestations. If we look at how the original type O humans are faring in today's modern world we can reliably say that they have done very well. So nature got it right the first time. These were nomadic people who ate a variety of nuts, grains, vegetables and fruits. Type O