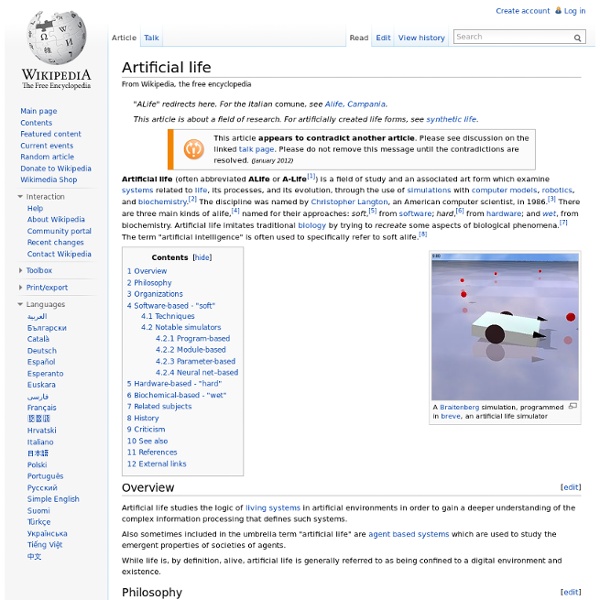 Artificial life (often abbreviated ALife or A-Life[1]) is a field of study and an associated art form which examine systems related to life, its processes, and its evolution, through the use of simulations with computer models, robotics, and biochemistry.[2] The discipline was named by Christopher Langton, an American computer scientist, in 1986.[3] There are three main kinds of alife,[4] named for their approaches: soft,[5] from software; hard,[6] from hardware; and wet, from biochemistry. Artificial life imitates traditional biology by trying to recreate some aspects of biological phenomena.[7] The term "artificial intelligence" is often used to specifically refer to soft alife.[8] Overview[edit] Artificial life studies the logic of living systems in artificial environments in order to gain a deeper understanding of the complex information processing that defines such systems. Philosophy[edit] Organizations[edit] Software-based - "soft"[edit] Techniques[edit] Notable simulators[edit]

Artificial intelligence AI research is highly technical and specialized, and is deeply divided into subfields that often fail to communicate with each other.[5] Some of the division is due to social and cultural factors: subfields have grown up around particular institutions and the work of individual researchers. AI research is also divided by several technical issues. Some subfields focus on the solution of specific problems. Others focus on one of several possible approaches or on the use of a particular tool or towards the accomplishment of particular applications. The central problems (or goals) of AI research include reasoning, knowledge, planning, learning, natural language processing (communication), perception and the ability to move and manipulate objects.[6] General intelligence is still among the field's long-term goals.[7] Currently popular approaches include statistical methods, computational intelligence and traditional symbolic AI. History[edit] Research[edit] Goals[edit] Planning[edit] Logic-based