Top 10 Mysteries of the Mind 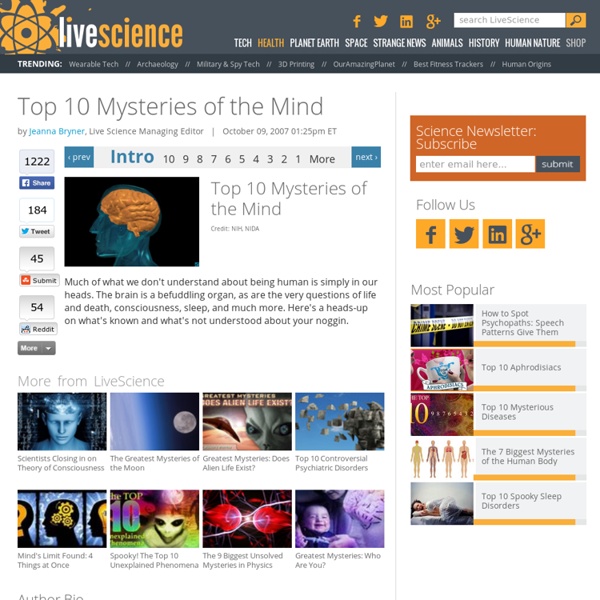 by Jeanna Bryner, Live Science Managing Editor | October 09, 2007 01:25pm ET Credit: NIH, NIDA Much of what we don't understand about being human is simply in our heads. The brain is a befuddling organ, as are the very questions of life and death, consciousness, sleep, and much more. Here's a heads-up on what's known and what's not understood about your noggin. Author Bio Jeanna Bryner Before becoming managing editor, Jeanna served as a reporter for Live Science and SPACE.com for about three years. Jeanna Bryner on

Countdown: 7 Medical Myths Even Doctors Believe | Untrue Medical Myths & Common Medical Misconceptions Robert Roy Britt | January 24, 2012 10:00am ET Credit: sukiyaki | shutterstock Popular culture is loaded with myths and half-truths. Most are harmless. But when doctors start believing medical myths, perhaps it's time to worry. In 2007, a study published in the British Medical Journal looked into several common misconceptions, from the belief that a person should drink eight glasses of water per day to the notion that reading in low light ruins your eyesight. "We got fired up about this because we knew that physicians accepted these beliefs and were passing this information along to their patients," said Aaron Carroll, assistant professor of pediatrics at the Indiana University School of Medicine. Click on for the top 7 most common medical myths — debunked.

5 mind-bending facts about dreams When your head hits the pillow, for many it's lights out for the conscious part of you. But the cells firing in your brain are very much awake, sparking enough energy to produce the sometimes vivid and sometimes downright haunted dreams that take place during the rapid-eye-movement stage of your sleep. Why do some people have nightmares while others really spend their nights in bliss? Here's some of what we know about what goes on in dreamland. 1. As if nightmares weren't bad enough, a rare sleep disorder — called REM sleep behavior disorder — causes people to act out their dreams, sometimes with violent thrashes, kicks and screams. 2. Staying up late has its perks, but whimsical dreaming is not one of them. In the study 264 university students rated how often they experienced nightmares on a scale from 0 to 4, never to always, respectively. 3. As in their wake hours, men also dream about sex more than women do. 4. 5.

End of the World? Top Doomsday Fears | May 21 Doomsday, 2012 Doomsday | Apocalypse Scenarios By Charles Q. Choi, Live Science Contributor | Credit: © Dgrilla | Dreamstime.comDoomsday fears With more and more technologies able to wreak mass destruction, a greater knowledge of what cosmic threats our planet faces, and more forms of media capable of trumpeting Armageddon, it seems as if there is more hype than ever about one supposedly impending apocalypse or another in 2012, despite all the failed doomsday predictions over the years. Here are 10 apocalyptic scenarios that have raised fears about the end of civilization, in alphabetical order. Credit: David P HughesZombies There are brain-controlling parasites effectively capable of turning ants into zombies, but no known germs can turn people into the walking dead. Charles Q. Charles Q. Charles Q.

Creative Genius: The World's Greatest Minds | Steve Jobs, Stephen Hawking & Albert Einstein | Geniuses LiveScience Staff | October 06, 2011 01:12pm ET Credit: Apple News of the death of Apple founder Steve Jobs on Oct. 5, 2011, has been received with sadness, admiration and gratefulness for a man considered a "creative genius" who "changed the world" in many ways. In addition to Jobs, plenty of great minds have challenged paradigms, opened windows into worlds we didn't even know existed, and produced innovations that have persisted through time. Here's a look at the world's titanic thinkers, from Charles Darwin and Albert Einstein to Stephen Hawking. 10 age-defying celebs: Harry Belafonte Interested in uplifting stories on the natural world, sustainable communities, simple food, and new thinking on how to live well? Please enter a valid email address and try again! No thanks

Why do humans still have body hair? Human body hair might seem to be useless on today's modern man, but it could help us detect parasites, researchers suggest, adding there's a chance our female ancestors preferred a bug-free mate, and so opted for hairier guys. Humans appear relatively hairless compared with our ape relatives, but the density of hair follicles on our skin is actually the same as would be expected of an ape our size. The fine hairs that cover our bodies, which have replaced the thicker ones seen on our close relatives, are thought to be an evolutionary leftover from our hairy ancestors. Now scientists find these fine hairs are useful after all — people with more of them are better at detecting bedbugs. "I run a research group that seeks to understand the biology of bloodsucking insects," said researcher Michael Siva-Jothy, an evolutionary ecologist at the University of Sheffield in England. The scientists detailed their findings online Dec. 13 in the journal Biology Letters. Related on LiveScience:

10 of the world's biggest unsolved mysteries: Voynich Manuscript Voynich Manuscript Named after the Polish-American antiquarian bookseller Wilfrid M. Voynich, who acquired it in 1912, the Voynich Manuscript is a detailed 240-page book written in a language or script that is completely unknown. Its pages are also filled with colorful drawings of strange diagrams, odd events and plants that do not seem to match any known species, adding to the intrigue of the document and the difficulty of deciphering it. Theories abound about the origin and nature of the manuscript. One thing most theorists agree on is that the book is unlikely to be a hoax, given the amount of time, money and detail that would have been required to make it.

New York Mayor Calls for Restrictions on Sugary Soft Drinks Goodbye, Big Gulps. Mayor Michael Bloomberg is calling for a ban on large-sized sugary beverages from most dining establishments. The new measure would prohibit New York City delis, movie theaters, sidewalk food carts, stadiums and restaurants from selling cups or bottles containing more than 16 fluid ounces of sweetened drinks, the New York Times reports. Bloomberg’s proposal is the first of its kind in the U.S., but not the first aggressive stance he’s taken on obesity. Stefan Friedman, a spokesman for the New York City Beverage Association, told the Times that the mayor is unfairly singling out soft drinks. But the chairman of the Board of Health, Dr. “Your argument, I guess, could be that it’s a little less convenient to have to carry two 16-ounce drinks to your seat in the movie theater rather than one 32 ounce,” the mayor said.

NASA flooded with 400 ideas to explore Mars - Technology & science - Space - Space.com Scientists have responded in a big way to NASA's call to help reformulate its Mars robotic exploration strategy, submitting about 400 ideas and Red Planet mission concepts to the space agency. NASA's Mars program suffered deep cuts in President Barack Obama's proposed 2013 budget, which was released in February. In response, NASA pulled out of the European-led ExoMars mission, which aims to launch an orbiter and a rover to the Red Planet in 2016 and 2018, respectively. The agency also undertook a broad rethink of its Mars strategy, to figure out how best to explore the Red Planet with reduced funding. Instead, twice that many submissions poured in from individuals and teams that included professional researchers, undergraduate and graduate students, NASA centers, federal laboratories, industry and international partner organizations. [ 7 Biggest Mysteries of Mars ] The ideas that survive the first cut will be presented during a workshop held June 12-14 in Houston.