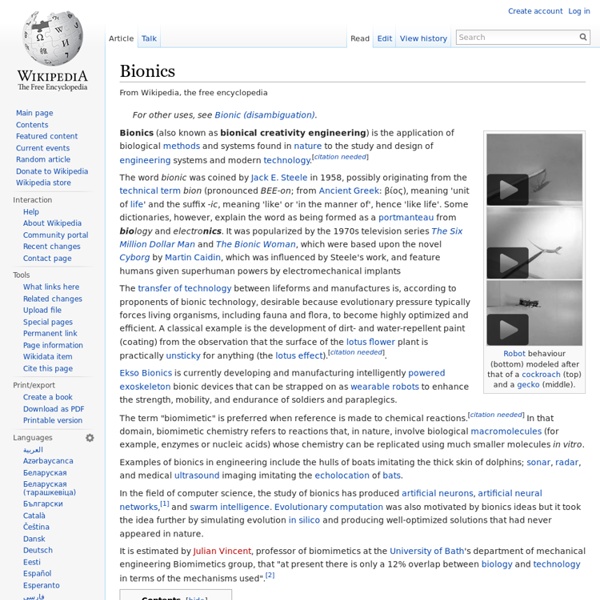 Bionics (also known as bionical creativity engineering) is the application of biological methods and systems found in nature to the study and design of engineering systems and modern technology.[citation needed] The transfer of technology between lifeforms and manufactures is, according to proponents of bionic technology, desirable because evolutionary pressure typically forces living organisms, including fauna and flora, to become highly optimized and efficient. A classical example is the development of dirt- and water-repellent paint (coating) from the observation that the surface of the lotus flower plant is practically unsticky for anything (the lotus effect). Ekso Bionics is currently developing and manufacturing intelligently powered exoskeleton bionic devices that can be strapped on as wearable robots to enhance the strength, mobility, and endurance of soldiers and paraplegics. The term "biomimetic" is preferred when reference is made to chemical reactions. History[edit]

Hierarchical temporal memory Hierarchical temporal memory (HTM) is an online machine learning model developed by Jeff Hawkins and Dileep George of Numenta, Inc. that models some of the structural and algorithmic properties of the neocortex. HTM is a biomimetic model based on the memory-prediction theory of brain function described by Jeff Hawkins in his book On Intelligence. HTM is a method for discovering and inferring the high-level causes of observed input patterns and sequences, thus building an increasingly complex model of the world. Jeff Hawkins states that HTM does not present any new idea or theory, but combines existing ideas to mimic the neocortex with a simple design that provides a large range of capabilities. HTM structure and algorithms[edit] An example of HTM hierarchy used for image recognition Each HTM node has the same basic functionality. Each HTM region learns by identifying and memorizing spatial patterns - combinations of input bits that often occur at the same time. Bayesian networks[edit]

Geology.com - Earth Science News, Maps, Dictionary, Articles, Jobs Autonomic Computing The system makes decisions on its own, using high-level policies; it will constantly check and optimize its status and automatically adapt itself to changing conditions. An autonomic computing framework is composed of autonomic components (AC) interacting with each other. An AC can be modeled in terms of two main control loops (local and global) with sensors (for self-monitoring), effectors (for self-adjustment), knowledge and planner/adapter for exploiting policies based on self- and environment awareness. Driven by such vision, a variety of architectural frameworks based on “self-regulating” autonomic components has been recently proposed. A very similar trend has recently characterized significant research in the area of multi-agent systems. Autonomy-oriented computation is a paradigm proposed by Jiming Liu in 2001 that uses artificial systems imitating social animals' collective behaviours to solve difficult computational problems. Problem of growing complexity[edit] Automatic Aware

Cybernetics Cybernetics is a transdisciplinary[1] approach for exploring regulatory systems, their structures, constraints, and possibilities. Cybernetics is relevant to the study of systems, such as mechanical, physical, biological, cognitive, and social systems. Cybernetics is applicable when a system being analyzed incorporates a closed signaling loop; that is, where action by the system generates some change in its environment and that change is reflected in that system in some manner (feedback) that triggers a system change, originally referred to as a "circular causal" relationship. Some say this is necessary to a cybernetic perspective. System dynamics, a related field, originated with applications of electrical engineering control theory to other kinds of simulation models (especially business systems) by Jay Forrester at MIT in the 1950s. Norbert Wiener defined cybernetics in 1948 as "the scientific study of control and communication in the animal and the machine Definitions[edit] W. General

Hierarchical Temporal Memory We've completed a functional (and much better) version of our .NET-based Hierarchical Temporal Memory (HTM) engines (great job Rob). We're also still working on an HTM based robotic behavioral framework (and our 1st quarter goal -- yikes - we're late). Also, we are NOT using Numenta's recently released run-time and/or code... since we're professional .NET consultants/developers, we decided to author our own implementation from initial prototypes authored over the summer of 2006 during an infamous sabbatical -- please don't ask about the "Hammer" stories. I've been feeling that the team has not been in synch in terms of HTM concepts, theory and implementation. We have divided our HTM node implementation into 2 high level types. 1) Sensor Node and 2) Cortical Node. An HTM sensor node provides a mechanism to memorize sensor inputs and sequences of those inputs. EXAMPLEtemp = temperature sensor pressure = barometric sensor light = luminousity sensor moisture = humidity sensor

On Intelligence - Welcome Autonomous agent An autonomous agent is an intelligent agent operating on an owner's behalf but without any interference of that ownership entity. An intelligent agent, however appears according to a multiply cited statement in a no longer accessible IBM white paper as follows: Intelligent agents are software entities that carry out some set of operations on behalf of a user or another program with some degree of independence or autonomy, and in so doing, employ some knowledge or representation of the user's goals or desires. Non-biological examples include intelligent agents, autonomous robots, and various software agents, including artificial life agents, and many computer viruses. Biological examples are not yet defined. References[edit] External links[edit] See also[edit]

Hugo de Garis Hugo de Garis (born 1947, Sydney, Australia) was a researcher in the sub-field of artificial intelligence (AI) known as evolvable hardware. He became known in the 1990s for his research on the use of genetic algorithms to evolve neural networks using three-dimensional cellular automata inside field programmable gate arrays. He claimed that this approach would enable the creation of what he terms "artificial brains" which would quickly surpass human levels of intelligence.[1] He has more recently been noted for his belief that a major war between the supporters and opponents of intelligent machines, resulting in billions of deaths, is almost inevitable before the end of the 21st century.[2]:234 He suggests AIs may simply eliminate the human race, and humans would be powerless to stop them because of technological singularity. De Garis originally studied theoretical physics, but he abandoned this field in favour of artificial intelligence. Evolvable hardware[edit] Current research[edit]