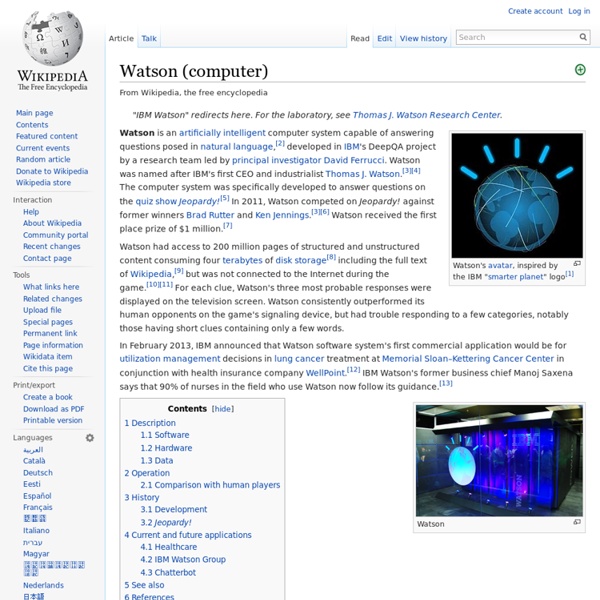 Watson is an artificially intelligent computer system capable of answering questions posed in natural language,[2] developed in IBM's DeepQA project by a research team led by principal investigator David Ferrucci. Watson was named after IBM's first CEO and industrialist Thomas J. Watson.[3][4] The computer system was specifically developed to answer questions on the quiz show Jeopardy![5] In 2011, Watson competed on Jeopardy! against former winners Brad Rutter and Ken Jennings.[3][6] Watson received the first place prize of $1 million.[7] Watson had access to 200 million pages of structured and unstructured content consuming four terabytes of disk storage[8] including the full text of Wikipedia,[9] but was not connected to the Internet during the game.[10][11] For each clue, Watson's three most probable responses were displayed on the television screen. The high-level architecture of IBM's DeepQA used in Watson[14] When playing Jeopardy! The Jeopardy!

Deep Blue (chess computer) Deep Blue After Deep Thought's 1989 match against Kasparov, IBM held a contest to rename the chess machine and it became "Deep Blue", a play on IBM's nickname, "Big Blue".[8] After a scaled down version of Deep Blue, Deep Blue Jr., played Grandmaster Joel Benjamin, Hsu and Campbell decided that Benjamin was the expert they were looking for to develop Deep Blue's opening book, and Benjamin was signed by IBM Research to assist with the preparations for Deep Blue's matches against Garry Kasparov.[9] On February 10, 1996, Deep Blue became the first machine to win a chess game against a reigning world champion (Garry Kasparov) under regular time controls. However, Kasparov won three and drew two of the following five games, beating Deep Blue by a score of 4–2 (wins count 1 point, draws count ½ point). Deep Blue was then heavily upgraded (unofficially nicknamed "Deeper Blue")[11] and played Kasparov again in May 1997, winning the six-game rematch 3½–2½, ending on May 11. Notes Bibliography

Science & Environment - Why everyone must understand science Many people feel excluded by science, but philosopher AC Grayling says this makes us slaves to technology. The less we know the more likely we are to be manipulated by others. Science is undoubtedly humanity’s greatest achievement, says AC Grayling, Master of the New College of the Humanities . People have to wake up to the fact that they have to be part of the story in thinking about science, and thinking about the meaning of science as it applies to our world. People feel excluded by science and debates about science, they use laptops, they fly in planes, use appliances in the home and they don’t know what’s behind this technology. People are aware that there are lots of problems with the environment and the climate. We have to start this at school. We have to have a healthy scepticism, says Grayling, people can’t just shut their eyes to things that are important.

Watson Yes, Computers Can Think NEW HAVEN— Last year, after Garry Kasparov's chess victory over the I.B.M. computer Deep Blue, I told the students in my Introduction to Artificial Intelligence class that it would be many years before computers could challenge the best humans. Now that I and many others have been proved wrong, a lot of people have been rushing to assure us that Deep Blue is not actually intelligent and that this victory has no bearing on the future of artificial intelligence. Although I agree that the computer is not very intelligent, to say that it shows no intelligence at all demonstrates a basic misunderstanding of what it does and of the goals and methods of artificial intelligence research. True, Deep Blue is very narrow. It can win a chess game, but it can't recognize, much less pick up, a chess piece. When people say that human grandmasters do not examine 200 million move sequences per second, as the computer does, I ask them, ''How do you know?'' So what shall we say about Deep Blue?

Andy Beckett: The forgotten story of Chile's 'socialist internet' | Technology During the early 70s, in the wealthy commuter backwater of West Byfleet in Surrey, a small but rather remarkable experiment took place. In the potting shed of a house called Firkins, a teenager named Simon Beer, using bits of radios and pieces of pink and green cardboard, built a series of electrical meters for measuring public opinion. His concept - users of his meters would turn a dial to indicate how happy or unhappy they were with any political proposal - was strange and ambitious enough. And it worked. Yet what was even more jolting was his intended market: not Britain, but Chile. Unlike West Byfleet, Chile was in revolutionary ferment. Stafford Beer attempted, in his words, to "implant" an electronic "nervous system" in Chilean society. When the Allende administration was deposed in a military coup, the 30th anniversary of which falls this Thursday, exactly how far Beer and his British and Chilean collaborators had got in constructing their hi-tech utopia was soon forgotten.

Will Robots be smarter?